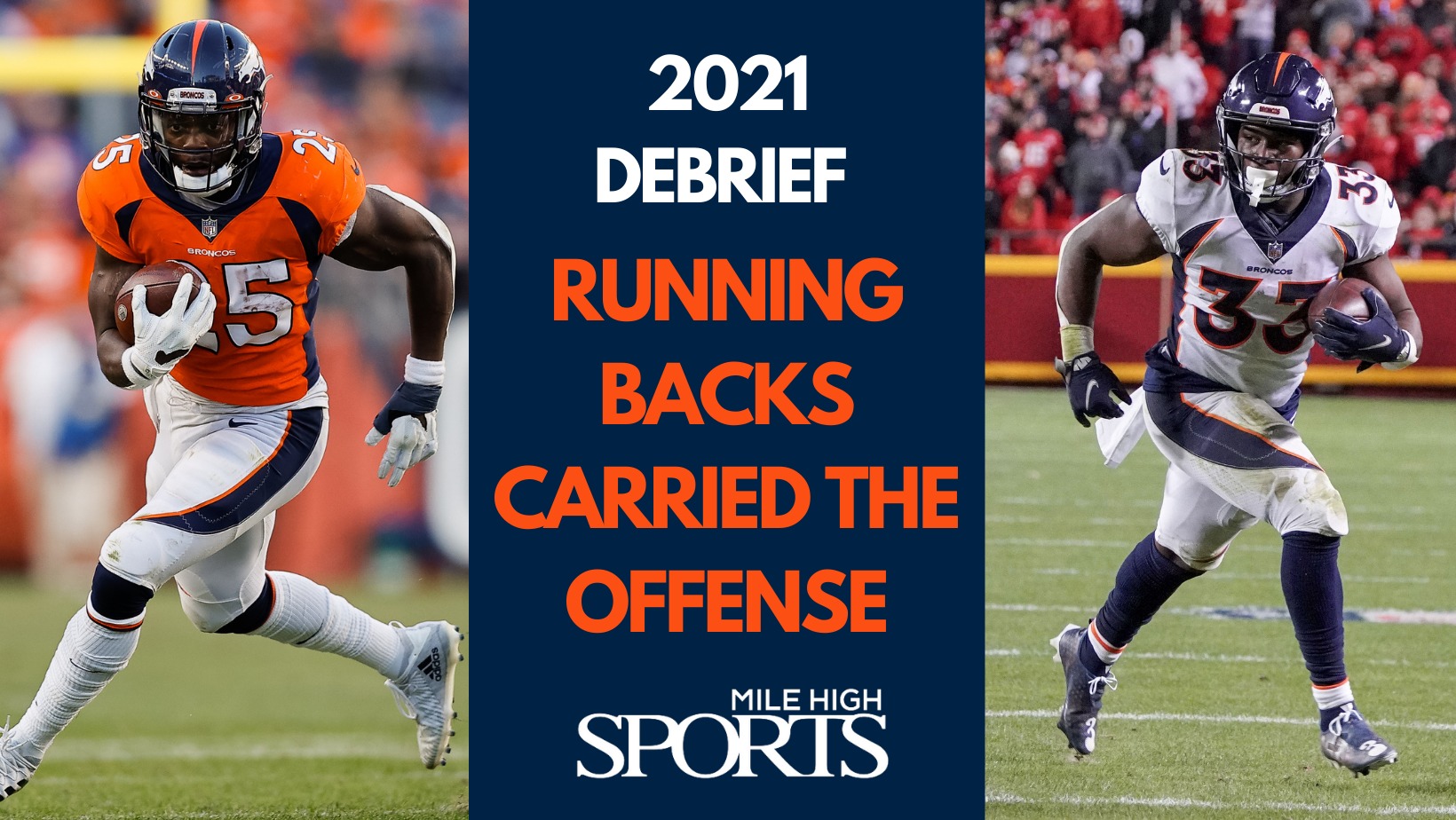 The Denver Broncos running back room may have been the team’s best unit in 2021.

Denver ranked 13th in the NFL in rushing totaling 2,025 yards per Pro Football Reference, which was in line with the unit’s performance the season prior.

The 2021 campaign’s rushing success came primarily from the duo of Melvin Gordon and Javonte Williams. The 50/50 split touches created one of the game’s most productive one-two punches and provided the offense with an identity.

Gordon was the clear lead back in 2021. The former first-round pick for the Chargers started the 2021 season as Denver’s 1A option at running back, though he was forced to split carries with rookie phenom Javonte Williams.

Unlike the 2020 season, Gordon’s splits were much more predictable and his co-star in the backfield was closer to Gordon’s caliber.

When it was all said and done, Gordon rushed for 918 yards in 2021, making it his second-straight season eclipsing 900 yards in a Broncos uniform.

Melvin Gordon scores the first TD of the game! #BroncosCountry

Gordon also paced all Broncos’ players with 10 scores; eight on the ground and two through the air.

Throughout the season, Gordon provided the offense with a spark to the tune of three 100-yard outings. From the first game on, his vision and patience were a perfect match for the offense.

Melvin Gordon takes a 70-yard trip to the crib 💨

The veteran was a consistent force, rarely being stopped at the line. He was also sound in blitz pickup.

The lone blemish on Gordon’s 2021 resume was his knack to fumble in crucial moments (two of his three fumbles total in 2021 came in such a scenario).

A fourth-and-one fumble against the Eagles late in the contest ended a drive that was likely to produce points and, to make matters worse, was returned by Philadelphia for a game-sealing touchdown.

Gordon’s fumble against the Chiefs also came at a critical time. Though the majority of the blame should be placed on blocks missed upfront, the outcome was ultimately the same; another scoop and score.

Both turnovers sealed comeback efforts for a Denver team with little margin for error. That said, the turnovers should not overshadow Gordon’s all-around solid performance, as he was arguably the Broncos’ most valuable offensive player.

General Manager George Paton was criticized for moving up in the second round for Williams, a bruising running back out of North Carolina, but Williams was quick to showcase the talents that made Paton believe in him enough to make that aggressive play.

JAVONTE WILLIAMS WILL NOT GO DOWN
pic.twitter.com/Dlk7ZMTZvC

Williams finished the season with 903 yards and was the second leading rookie rusher in the NFL. The rookie’s success was driven by his ability to break tackles. According to Pro Football Focus, he forced 63 missed tackles this season, second to only Jonathan Taylor (65), but Williams only had 203 carries to Taylor’s 332.

While providing a huge lift in the running game, Williams also provided glimpses of being a complete back. He was adept at picking up blitzes and produced 43 catches for 316 yards through the air.

In total, Williams scored seven times, four on the ground and three through the air.

Williams showed enough to excite fans from all across the league, and many believe he has just scratched the surface of his potential. If he can improve on his vision, he will be one of the most dangerous weapons in football in 2022.

Williams and Gordon got the lion’s share of the Broncos’ carries in 2021. A large part was due to Mike Boone missing time with an injury to start the season. The former Minnesota Viking was counted on to provide speed from the backfield.

Though he only totaled 35 yards on the ground all season, when Boone got his opportunities against the Kansas City Chiefs, he showed the burst many had hoped to see all season.

Boone may find a bigger role in 2022 with Gordon’s status unclear. His decisiveness and burst will be a good fit for the outside zone concept behind the new offensive scheme for next season.

Damarea Crockett provided special teams snaps and only got a few touches on offense. It will be interesting to see how he fits into the new offensive scheme. Crockett’s limited touches do not provide much data on how his skills project to the scheme change.

Even with small contributions from other rushers, Gordon and Williams were outstanding. The duo produced the 15th (Gordon) and 16th (Williams) leading rushers in the NFL in 2021. As a result, the Broncos featured the only pair of rushers to top 900 yards each.

Williams will most certainly be the bell-cow for the Broncos in 2022, with Gordon approaching the age of 30 and free agency. Though Gordon’s future in Denver is bleak, he should fetch a solid contract in free agency because of his consistent and well-rounded play.

Boone and Crockett’s roles may be primarily on special teams moving forward. However, each could etch out some playing time if Gordon moves on next season. Boone’s experience with the Minnesota Vikings’ outside zone scheme should give him a leg up on the number two role heading into next season.