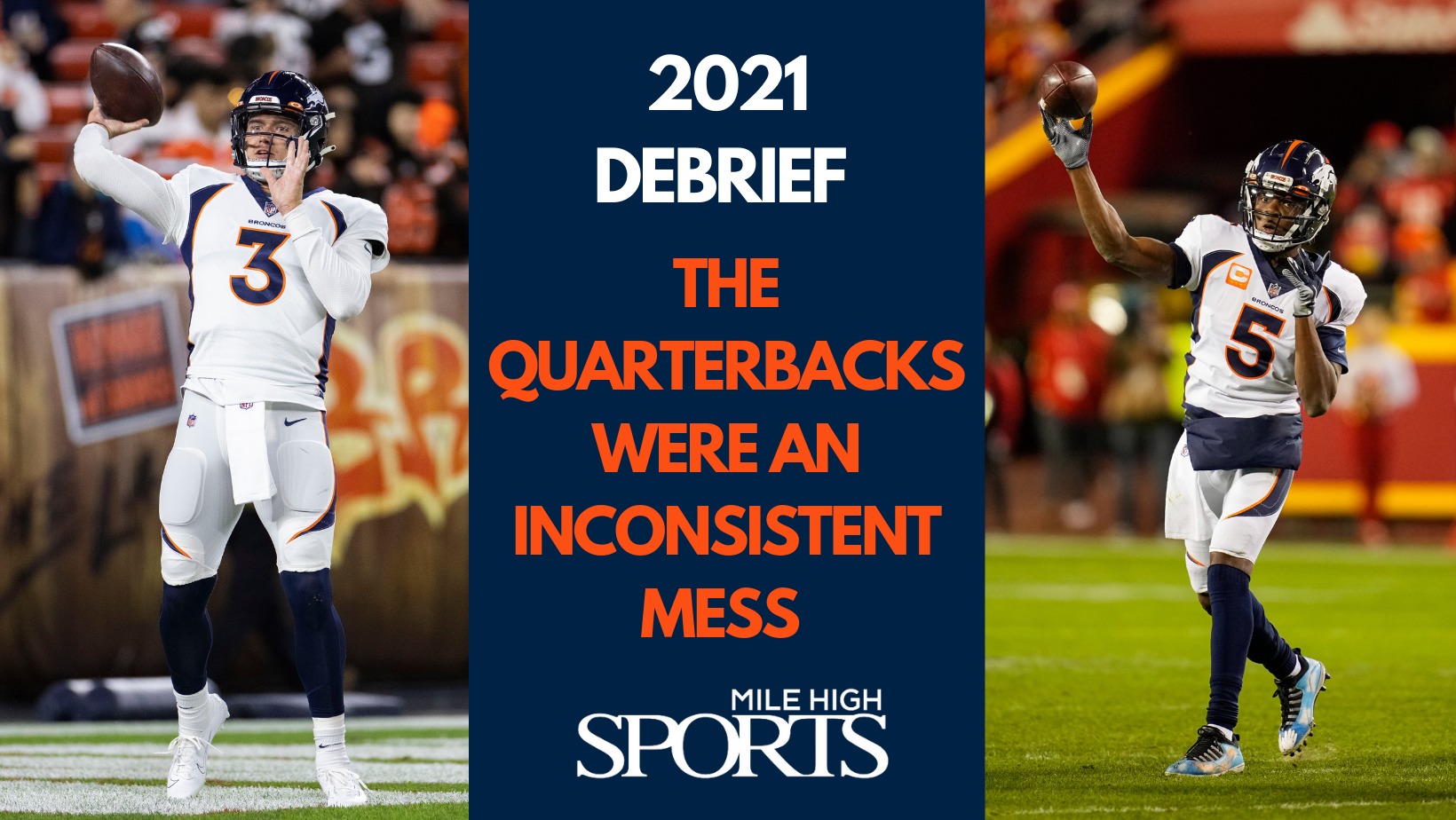 The Denver Broncos 2021 season was underwhelming, to say the least. However, there were several bright spots worth noting.

Reviewing the 2021 season, a grade will be given to each position group. First up, quarterbacks.

Heading into the 2021 campaign the Broncos coaching staff was tasked with deciding between the young incumbent or the steady veteran.

The two would battle through the offseason and head coach Vic Fangio determined predictable play over potential was best for the Broncos.

Teddy Bridgewater was steady but unspectacular

The 50/50 competition went the veteran’s way. Bridgewater won the job after the Broncos’ second preseason game against the Seattle Seahawks.

On the season, Bridgewater completed 66.9% of his passes while accumulating 3,052 yards through the air. Bridgewater sported a passer rating of 94.9 while tossing 18 touchdowns and only seven interceptions. The veteran also added two touchdowns on the ground.

Statistically, this was the best season from any Broncos quarterback since Peyton Manning’s 2014 campaign.

Bridgewater’s play in September was phenomenal. He completed over 76% of his passes and averaged 275.67 yards per game with four scores and no turnovers. However, Bridgewater’s play declined after the team’s 3-0 start.

The wheels fell off as the team went 4-10 over their last 14 games and Bridgewater’s play was not good enough to stop the freefall. Additionally, the Broncos’ starter had only two games with over 300 yards passing, one of which being garbage time in a blowout loss at home to the Las Vegas Raiders.

Bridgewater also failed to shake off the label of “injury-prone” as he left several games early and missed three more before ending the season on injured reserve.

Believing he was going to be the starter heading into the season, Lock failed to adjust to his backup role. When coming in off the bench, Lock struggled.

Lock turned over the ball each of the three games in which he entered the game as a substitute.

In relief, Lock was not effective. He looked to press each game as though playing well would get him a starting job again.

He finally got his opportunity to start in Week 16 against the Las Vegas Raiders. Lock did some good things in his final three games, as evidenced by his 95.33 passer rating as a starter. Additionally, Lock threw one score, ran for two scores, and did not turn the ball over in his starts. However, Lock’s safe play gave the offense very little overall production. The team did not score more than 24 points in any of his three starts.

Similar to his 2020 campaign, Lock provided a mixture of phenomenal plays while also having frustrating mistakes. Overall Lock did not do enough in camp to take the job and was too timid later to inspire hope when he was given snaps.

In the end, the unit was just not good enough to get this team where it wanted to go. Whether it was the player under center, coordination, or play-calling, the passing game failed the offense. The receivers did not make an impact due to limited opportunities and the offense rarely made a big play in the passing game.

An offense that struggled to convert on third downs while rarely pushing the ball downfield was in large part due to Bridgewater and Lock’s coached timidness.

Both Bridgewater and Lock did not impress Paton enough for the Broncos to commit to either player. Thus, the team will look to upgrade again in 2022.