Today marks 49 days until the beginning of the 2022-23 NBA season. In preparation for the most anticipated year in Denver Nuggets franchise history, Ryan Blackburn is asking and answering 20 burning questions facing the Nuggets prior to Media Day on Monday, September 26th. One question each weekday for the next four weeks.

Question 2: Which Nuggets will play the most minutes at each position?

Beyond health concerns, the largest variable for the Denver Nuggets in the 2022-23 season is finding a consistent rotation.

With two stars in Jamal Murray and Michael Porter Jr. returning to the court and several new faces on the roster, head coach Michael Malone will have his hands full identifying a consistent rotation early in the season. Kentavious Caldwell-Pope and Bruce Brown were Denver’s most notable additions, but with the departures of veterans Austin Rivers, JaMychal Green, and DeMarcus Cousins, other positions in the rotation are almost certainly up for grabs too.

Murray and Porter will almost certainly be on minute and game restrictions too, meaning Denver’s rotation will shift any time one or both of those two sit out for planned rest. While it may be impossible to project Denver’s exact rotation, there are certain expectations heading into the season that minute projections can be based upon. Malone will often default to veterans if the competition is close, but he will give young players an opportunity if they deserve one. Bones Hyland earned his minutes last year, and power forward/center Zeke Nnaji is in position to do the same, despite facing veteran competition.

With that in mind, let’s project Denver’s rotation throughout the entire regular season.

*There are 48 minutes played in each game at every position. 82 regular season games yields 3,936 regulation minutes per position. Let’s round up to 3,980 minutes played at each position to account for some overtime periods.* 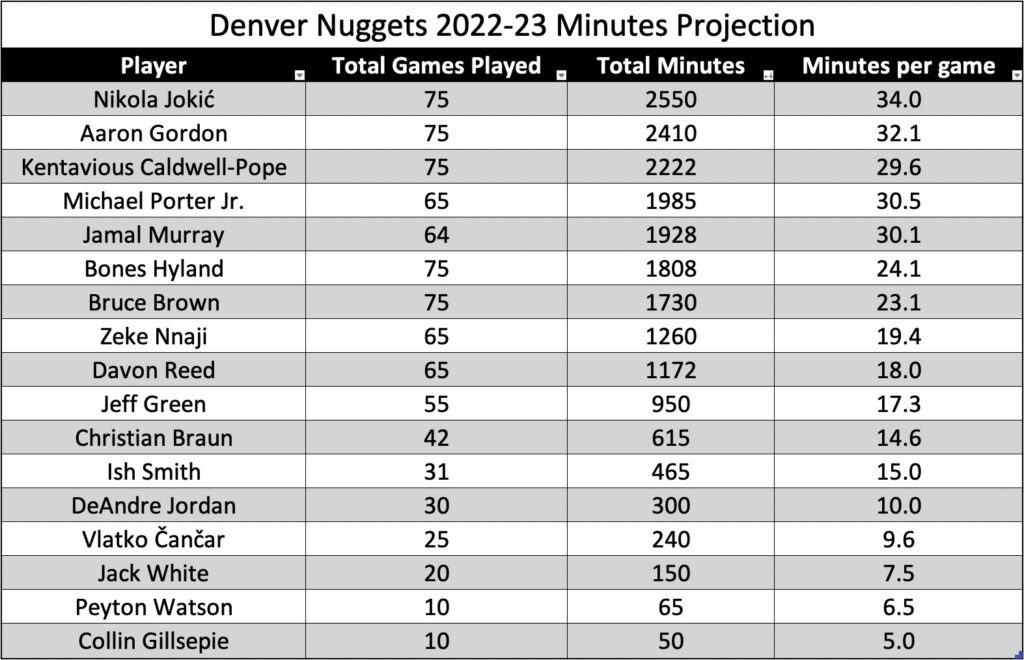 The above table, sorted by total minutes, is a fair representation of the issues facing the Nuggets during the upcoming season. Porter and Murray are projected to play 65 and 64 games respectively, though they could end up lower or higher depending on their responses to prolonged absences. Jokić, Gordon, and Caldwell-Pope were healthy last season, but odds are that as least one of them, most likely Gordon, could miss some time.

Off the bench, Bones and Brown are seemingly secure in their roles and will play extra minutes when either Murray or Porter sit out games. Zeke Nnaji and Davon Reed each project to play the next most minutes, but those roles could just as easily go to Jeff Green and Christian Braun respectively. Ish Smith and DeAndre Jordan, two veterans, are unlikely to be part of the primary rotation but will see opportunities throughout the season.

Nuggets fans likely won’t complain with the overall minute distribution if it works out this way. Obviously, the best laid plans can go to waste after one injury or another. As long as the Nuggets are reasonably healthy at the end of the year though, there’s reason for excitement.

For the individual minutes at each position, it’s important to remember that several players will see their minutes overlap at multiple positions. The only players that play one position only are Ish Smith (point guard), Nikola Jokić (center), and DeAndre Jordan (center). Building a rotation during the middle of the season often involves injuries, playing out of position, and general unexpected circumstances.

For that reason, it’s important to look at the projected minutes played at each position.

The Nuggets point guard positional breakdown looks drastically different after last season. Monte Morris and Facundo Campazzo played around 80% of the total minutes during the regular season. Bones Hyland played about 15% of the minutes with Markus Howard making up much of the difference in garbage time.

Now, the Nuggets will feature a new duo at the top with Murray and Bones. Murray will be the de facto starter while Bones will be his primary backup. On nights when Murray rests due to injury management, Bones should comfortably slide into the starting spot while Ish Smith replaces him as the backup.

There are possible alternatives. Ish Smith may be good enough to warrant a full-time rotation spot, pushing Bones to backup shooting guard instead. After last season though, it seems likely that the Nuggets will want the ball in Bones’ hands more frequently rather than less. Collin Gillespie is currently recovering from surgery on a broken leg he sustained during the offseason, but there’s no telling how long that process will take. Bruce Brown might also play some point, but it’s difficult to game plan for multiple injury absences at the same time.

While point guard may look drastically different, shooting guard has been entirely overhauled. Oh the seven players projected to play at least one minute at the position, just two played the position last year. Caldwell-Pope is the newest starter, and shooting guard is his primary position. He will provide a stronger 3&D presence than Will Barton at the same spot.

Bruce Brown is his primary backup, though Brown will also spend significant time at small forward. That ambiguous positioning will allow for others to see time at shooting guard when KCP sits. Rookie Christian Braun will almost certainly see some time, as will Davon Reed. Murray is the one point guard on the roster most likely to slide over as well, with Bones-Murray lineups likely to see time as the season wears on.

Finally, there will be some (brief) moments when Ish Smith is at point guard and one of Bones or Gillespie will slide to shooting guard. Most likely a garbage time option.

Small forward will be the position that sees the most variety for a number of reasons. Michael Porter Jr. is the de facto starter, but with an expected game restriction built in, he’s projected to play just 65 total games. That leaves opportunities open for others, including several of Denver’s shooting guards sliding to small forward.

Davon Reed is the projected primary backup. He also may start some games in place of Porter depending on the situation. Behind Reed are Brown, Braun, and KCP, all of whom could reasonably see some time in small ball lineups.

Aaron Gordon’s inclusion is an ode to both Jeff Green and Zeke Nnaji, who could each see some time starting at power forward in bigger lineups. Gordon slides up to small forward, a configuration the Nuggets are very familiar with after last year.

Finally, both Jack White and Peyton Watson are likely to see some garbage time minutes, though White seems to be more ready to contribute now and could see some regular time if the Nuggets are hit with the injury bug.

Though there are some questions about who the primary backup at power forward will be, the starter is very clear. Gordon will spent the vast majority of his minutes at power forward this year after playing a significant number at small forward in place of Porter during the 2021-22 season. Power forward is Gordon’s best position, and Nuggets fans could hope for a career year from Gordon on both ends of the floor as a result.

Green is currently positioned to be the backup. In Green-Nnaji lineups, I’ve designated Green as the power forward, though their roles will be mostly interchangeable depending on the matchup. Green remains a competent, helpful rotation piece, though he was overtaxed last season replacing Porter in the starting unit.

Nnaji and Porter will also spend some time at power forward. These lineups should be strong offensively with the three-point shooting of both players. Vlatko Čančar, though not currently projected to play a significant role, could also push for some backup minutes, especially in the event of an injury absence.

For the last six seasons, the Nuggets have been able to pencil in Nikola Jokić for at least 2,000 minutes at the center position. In an NBA where big men are sustaining injuries relatively frequently, Jokić has remained remarkably consistent. He will have to be once again as Murray and Porter look to get adjusted. The Nuggets also don’t have a stable backup center heading into the season just yet, meaning Jokić is projected for a career high in total minutes played.

Behind him, Nnaji is expected to take a leap of sorts. With Green penciled in at power forward, Nnaji will find the bulk of his minutes at backup center. He will have to grow comfortable as a pick and roll defender and rebounder, but his shooting and switchable defense should help ease a transition to the center spot.

DeAndre Jordan will get some opportunities as well, though he isn’t projected to be Denver’s primary option at backup center. Against some bigger lineups though, Jordan will likely have a role. Green may also slide down to center against some smaller lineups.

Finally, both Gordon and Vlatko are penciled in for a nominal number of minutes. The Nuggets would be wise to experiment with Gordon at center at some point. If none of Denver’s backup center options become trusted playoff options, sliding Gordon to center in the minutes Jokić rests could become their best option.

There’s a lot for Michael Malone to figure out heading into the 2022-23 season. Fortunately, the starters appear to be settled, and both Bones Hyland and Bruce Brown will most likely make up the backup backcourt.

Malone likes to find a comfortable rotation and stick to it as much as possible during the regular season, but this year might take some more tinkering with the frontcourt backups. Nnaji and Green appear to have the inside track, but playing both of them means going smaller. There isn’t enough spacing for DeAndre Jordan to be part of lineups that also feature Jeff Green and Zeke Nnaji. Those three will absorb the bulk of the power forward and center minutes behind Gordon and Jokić, but there will be opportunities for others.

Below is a graphic that features the full positional minute breakdown, including each player’s percentage of minutes played at different positions. Hopefully, it serves as a nice guide for what’s to come for the Nuggets during the 2022-23 season.