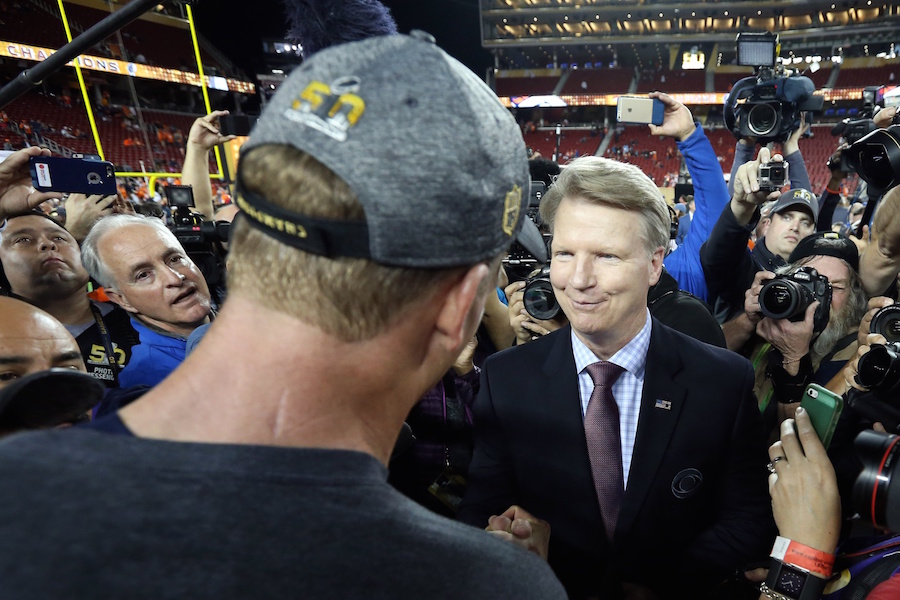 In the 30 days leading up to the start of Denver Broncos Training Camp 2016, we’re examining 30 big questions for the season. We’ll make a case for each answer; you’ll vote and tell Broncos Country what’s going to happen this year.

If there is one guy Denver Broncos fans love to hate, it’s Phil Simms.

The former Giants’ quarterback broke the hearts of Broncos fans in 1987 when the Giants defeated the Broncos in Super Bowl XXI, and now he has found a way to get under Broncos fans’ skins long after his playing days have ended.

Because of the Broncos’ recent success, they often play in CBS’ prime time afternoon spot. Unfortunately for Broncos’ fans, the broadcasters for that slot are Jim Nantz and none other than Simms.

In 2014, over 40,000 Broncos fans went as far as to sign a petition that would ban Phil Simms from ever calling Broncos game ever again. While the petition ultimately didn’t amount to anything, could Simms be possibly slowly starting to show the Broncos the love they deserve?

Simms and Nantz were on the call for all three of Denver’s playoff games last year, including in February when the Broncos defeated the Carolina Panthers in Super Bowl 50. As such, 2016 could finally be the year that Simms realizes he’s been wrong for being a Broncos hater all these years. After watching the team knock the stuffing out of Ben Roethlisberger, Tom Brady and Cam Newton on their way to their Super Bowl victory, Simms finally realizes how awesome the Broncos are and lets the love pour through his microphone and onto our televisions.

After the season the Broncos had in 2015, it’s hard for anyone to hate on them, even Phil Simms. Simms knows firsthand how hard it is to win a Super Bowl, and because of that he finally shows the Broncos a little bit of love, even if he isn’t happy about it. Simms knows how horrifying it would have been to face that Broncos’ defense and shows some respect to the world champions when he hops back in the booth.

I’ll think about it…

While he may not show it, Simms will take showing the Broncos some love into serious consideration when the 2016 season finally kicks off. Simms is now a seasoned veteran in the broadcast game and he knows that he can’t switch his style up this deep into his second career. He may not let the world know that he secretly likes the Broncos, but he knows deep down, and that’s what really counts.

That’s not my job…

Simms couldn’t wait to get in the booth to call the Super Bowl so he could actively root against the Broncos and help ensure a Panthers victory. The fact that he wasn’t able to decide the outcome has been eating away at him all offseason and the anti-Broncos venom spews from his lips come September. 2016 may not be the year that Simms finally confesses his love for the Broncos, but that’s fine with Broncos fans, they know that’s Jon Gruden’s job anyway.

What does Broncos Country think? Will Phil Simms finally give the Broncos some love?

30 QUESTIONS: Will Phil Simms finally show the Broncos some love in 2016?

Previous question: How many passing yards will Mark Sanchez have?