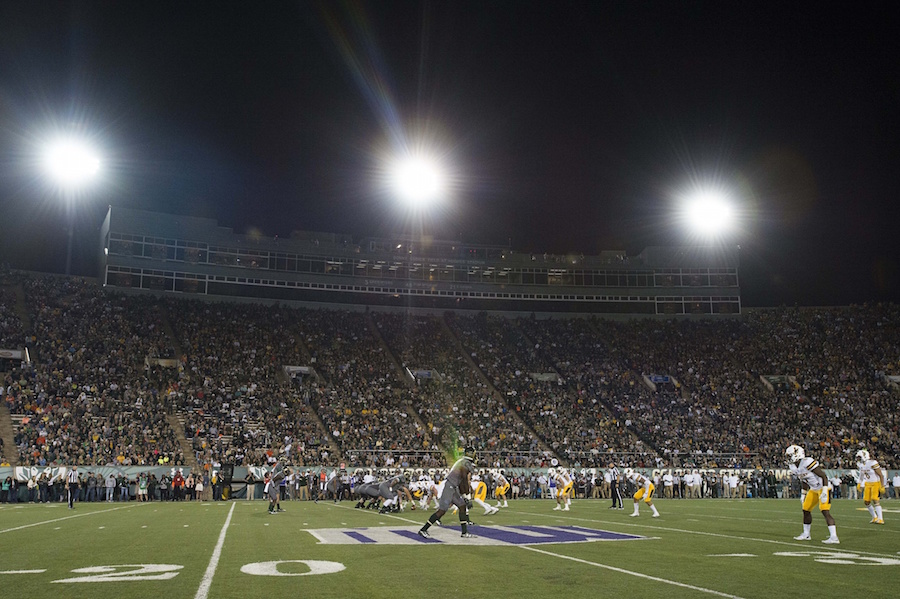 A roller coaster would be too calm of an analogy to describe the start of Colorado State’s football season.

More like the Tower of Terror, Disney World’s attraction which is modeled after a haunted hotel’s elevator which slowly rises before falling multiple stories, scaring all in attendance.

To start the season, CSU laid a complete egg against their bitter, new-school rival, the Colorado Buffaloes. After CU got out to a 37-0 start, the team basically quit on themselves until Faton Bauta came in during garbage time to at least put some points on the board.

Mike Bobo called it “embarrassing,” not only for him, but for the fans and the entire program as a whole. OK, we now know Colorado – ranked No. 21 in the country – is the real deal, but it was as telling a blowout for the Buffaloes as it was for the Rams.

But CSU bounced back, defeating the University of Texas at San Antonio, albeit a closer contest than hoped for (23-14). And in that game, only two weeks into the season, Bobo burned the redshirt off Collin Hill’s back and played the true freshman. It meant three different quarterbacks had played in only two games.

Since then, this team has been Hill’s, a freshman who can really sling the ball. A needed blowout over the University of Northern Colorado Bears was the result in Week 3 before a close loss at the Minnesota Golden Gophers came in Week 4. And with the team sitting at 2-2, the Rams entered first Mountain West Conference game, with the 2-2 Wyoming Cowboys coming to town in the last meeting of the Border War at Sonny Lubick Field at Hughes Stadium.

Colorado State, with everything on the line – a more-than-sellout crowd in attendance, an ESPNU audience across the country and history to uphold – gave up. They rolled over and quit on themselves for a second straight time this year.

Up 14-3, two easy, early scores possibly left the players feeling overconfident, like this was their day, their game, their time to shine. Not so fast.

Freshman running back Marvin Kinsey fumbled and Wyoming scored on the next play. Then Hill, also a freshman, threw a pick-six while in the grasp of a Cowboy defensive lineman, instead of just taking the sack. Then, Wyoming’s offense got going and ran all over CSU’s D. Suddenly, the Rams were down 24-14.

Still, there was the second half, a chance to come back and win a much-needed game. Instead, the Rams were shut out after halftime all while Wyoming put up another two touchdowns and won 38-17.

This rehashing of a stinging game is important because now there’s a little more insight into what was going on during that critical second half. Former Colorado State running back Kyle Bell was on the sideline during the devastating Border War defeat, and he posted on Facebook today about why he was disappointed.

“Being on the sidelines for the first time in a long time, it just didn’t seem like any of the players gave a damn that they were getting their asses handed to them. I actually overhead a few plays, Big [sic] contributors mind you, talking about what they were doing after the game. Just seems like these players are soft and they have no leadership. I couldn’t believe what I was seeing on the sideline. I remember coming off the field after bad drives and dudes almost wanting to fight each other. This team has none of that passion”. (Tip o’ the cap to Keegan Pope for seeing this first.)

A lack of leadership, from the players themselves, is what seems to be plaguing the Rams right now, from the perspective of a former leader and player himself.

Bell played for the Rams from 2004-2008, playing electrically as a sophomore before tearing his ACL as a junior, redshirting and then filling in as an integral member of the offense as well as special teams in his final two seasons. Bell did anything and everything possible to push the Rams to victory, he was a fan favorite and an emotional leader.
What this 2016 team is lacking is a player like Bell, someone older who is willing to do anything to get the best out of his teammates and to win games.

This isn’t a knock on Hill, necessarily, but it’s possible the freshman is too young to be a true leader of the locker room. Nick Stevens was considered a leader last year and heading into this season, amongh the players, but he’s been demoted from starter to third-stringer. That could have had ramifications in the locker room that run deeper than who’s slinging the ball around on Saturdays, even if Hill has been quite productive despite his youth.

At running back, the most senior back is Dalyn Dawkins, a junior transfer who is quiet when he talks to the media and even admitted last Saturday after the loss he needs to step up in a leadership role more himself. Of course, a leader like Jasen Oden – a senior back last year – would be just what the doctor ordered, but there is no Oden this year.

On defense, the Rams lost Trent Matthews, Kevin Pierre-Louis and more, and that leadership can’t just be manufactured. And then, the man who was ready to lead in linebacker Deonte Clyburn had blood clots found in his leg, forcing him to sit out at least the first three months of the season, if not longer.

Bobo, too, admitted the Rams need more leadership from the players after the Border War loss; but who will it be?

If Colorado State wants to turn this season around – there’s still time, at 2-3, with seven games to play – someone, anyone, needs to take the reins in the locker room.
Bobo has been a solid head coach and a good leader of men – with his “Come to Jesus” meeting last year resulting in a four-game win streak to end the 2015 season – but who will shepard the Rams from a players perspective?