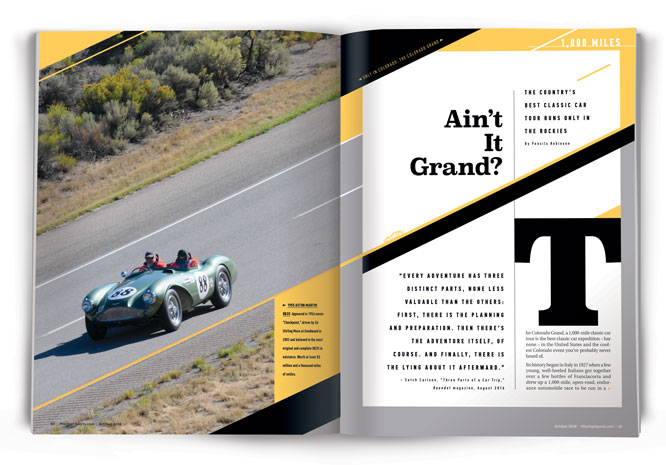 “Every adventure has three distinct parts, none less valuable than the others: First, there is the planning and preparation. Then there’s the adventure itself, of course. And finally, there is the lying about it afterward.” – Satch Carlson, “Three Parts of a Car Trip,” Roundel magazine, August 2016

The Colorado Grand, a 1,000-mile classic car tour is the best classic car expedition – bar none – in the United States and the coolest Colorado event you’ve probably never heard of.

Its history began in Italy in 1927 when a few young, well-heeled Italians got together over a few bottles of Franciacorta and drew up a 1,000-mile, open-road, endurance, automobile race to be run in a large figure eight from Brescia to Rome and back. The race, humdrumly dubbed the Mille Miglia, was held before and after WWII until the final event in 1957, which included two fatal crashes, the worst of which resulted in the deaths of nine spectators, including five children, who were among the hundreds lining the unbarricaded streets of Guidizzolo as the Gran Turisimo cars roared through the town.

In the spirit of the original Italian event, minus the hell-bent-for-leather competition and the danger to spectators, Englewood automotive enthusiast and Maserati owner Bob Sutherland, who overcame a bipolar disorder to develop the hugely successful Sutherlands Lumber, founded the Colorado Grand in 1989.

The Colorado Grand is a classic car tour through the Western Slope, which has run continuously for 28 years since its founding by Sutherland. The tour begins on the first Tuesday after Labor Day with approximately 100 (107 this year) 1960 or older cars and their drivers and co-drivers heading out of Vail and following a prescribed 1,000-mile route that returns to Vail on Friday afternoon.

One reason that most Coloradans haven’t heard of the Grand is that its only really public display (besides the daily lunch stops in designated small towns and chance encounters with amazed motorists on Colorado roads) is the Grand’s Concours d’Non Elegance on Saturday morning between nine and noon at Lionshead. Since the route is never made known to the public, the Concours, which features all the unwashed cars – parked and proudly showing the dust and bugs of a thousand-mile journey – is the only opportunity for the public to see these magnificent pieces of rolling sculpture and history.

Countless 1,000-mile tours have sprouted up throughout the country, some for charity, some for profit. There’s the California Mille, the New England 1000, the Copperstate 1000, the Michigan Mille, to name a few. The drivers we spoke with reinforce our parochial opinion that Colorado’s Grand is the best. The roads are incredible – well-maintained and featuring tight turns, long, sweeping curves and long stretches of straight roads with great visibility on both sides – and the scenery is unmatched. They also note that the “money goes to the right places,” meaning charity. And they love the organization of the event, thanks to Denverite and Allard J2X owner Tom Horan who is in his seventh year as Colorado Grand chairman. He also has a board of directors that includes Captain Jeff Goodwin of the Colorado State Patrol Motorcycle Operations and event coordinator Angie Getchel and her staff.

Another reason you probably haven’t heard of the Grand is that the drivers prefer to remain relatively anonymous. They and their cars are selected from about 150 applicants each year. Besides meeting the age requirement, the cars must be deemed historically significant and well-preserved examples of important makes and models. The drivers, in addition to paying the $7,000 entry fee, must be model citizens on the road and the type of people you’d like to hang out with for five days.

Neil Jones is the only Grand participant whom I knew before embarking on this motoring tale. He has driven one of his fabulous cars in the Grand almost every year since its inception. This year he’s driving the only Morgan represented in the field, a 1958 Plus 4 that features a frame made of 116 separate pieces of seasoned Belgian ash.

When we encounter Jones in the bar at the Elway’s in the Vail Lodge, he’s looking something like well-seasoned Belgian ash himself. He’s at least 20 years older than his car and trying not to act like a rich guy. The bartender is asking him to select a rye for the Old Fashioned he’s ordered and he’s insisting that the “house rye” (which doesn’t exist) will be fine.

He’s telling us that the Grand is all about good fellowship and charity. Guys with $35 million Ferraris and those with $40,000 Morgans are equals on the road and at the bar after a day of driving. Those who are too impressed with their cars and how they came to attain them are not invited back to the Grand. Also not invited back were the seven guys who ran out of gas on their way out of Vail last year. Not all cars finish the tour every year but a good start is important.

We recognize Wayne Carini sipping a Coke across the bar from us. He has a TV show called “Chasing Classic Cars” and is a master restorer at his F40 Motorsports shop in Portland, Conn. We later see his ride for the Grand parked in the circle at the Lodge; it’s a 1959 Maserati 3500GT Vignale Spyder Prototype worth at least $1 million. Somehow, he looks like a real car guy. Which he is.

Neil says famous people participate in the Grand but don’t want to be treated like celebrities. Jerry Seinfeld entered a classic Porsche from his collection for a couple of years but decided he’d just buy a place in the Rockies and drive these roads whenever he wanted to.

We reluctantly say goodbye to Neil as he heads to the opening dinner for Grand participants. We head out to the circle and see lots of guys fiddling with their rides. We engage Martin Sucari who’s applying a driver’s name decal to his dark blue 1953 Ferrari 250MM. The MM stands for the Mille Miglia in which this very car participated in 1954. Martin and his son, who live in Argentina, will drive the MM, worth over $4 million, over 1,000 miles of Colorado roads. Martin is generous with details about the car that resides for the rest of the year in Montana.

We also encounter the Oklahoma owner of a 1931 8-Liter Bentley who proudly shows us the car’s massive motor and its leather fan belt of which he has no doubts will survive the 1,000-mile trek.

From the names stenciled on the cars we note that there are a lot of father-son teams, as well as husband-wife duos. Quite different from going to a ballgame or hitting the mall.

The coolest thing about the Grand is that it has raised over $5 million for charities and college scholarships in the Colorado communities through which the Grand cars motor at safe and legal speeds. The largest recipient of the Grand’s largess is the Colorado State Patrol Family Foundation which includes three funds: Fallen Officers, Hardship and Tuition Scholarship.

Annually, eight Colorado State Patrol motorcycle troopers (known to the Grand participants as “The Motors”) are selected to accompany the Colorado Grand entourage for the entire 1,000-mile trip.

Lest you think that the cops are on the take and paid to look the other way while a bunch of rich guys in very expensive toys thumb their collective blue noses at our state’s traffic laws, Sergeant Chris Augustine sets the drivers straight at the Monday afternoon orientation meeting. In no uncertain terms he lets the drivers know that there is no immunity for the Grand and no tolerance for anyone who compromises the safety of Colorado’s citizens, livestock and wildlife. You may be driving a million-dollar car and own a Franklin Mint Monopoly Collector’s Edition but there’s no “Get Out of Jail Free” card for motoring morons.

A major point of emphasis by Sergeant Augustine directed to out-of-state participants who don’t realize the effects of our altitude is to stay hydrated. One can only imagine the number of pit stops required for this group of 60-plus drivers and passengers.

So, do these drivers, closely monitored by The Motors, ever act like you and me in our mundane Subarus and F250’s and exceed the speed limit? After all, a guy who transports to Colorado his 1931 Bentley Blower or his ’52 Jaguar C-Type or his ’60 Ferrari Short Wheel Base Competition – all of which are capable of 130-plus mph – might want to open it up just a bit to blur the scenery and clean the cobwebs from his mind and his carburetors.

Let’s just say that the Grand doesn’t talk about speed, other than being adamant about strictly observing small town speed limits.

Even if you’re not a car nut, there’s something about these rolling works of art that grabs you. Their likes will never be replicated, never pass this way again except in events like the Grand. Everything today is so homogenous; back then the Italians had unique styling and technology from the Germans and the Germans from the English and so on. That’s what makes these vehicles so memorable, so distinct. It’s like all those guys were operating in a vacuum, not really knowing how or why “the other guy” was building his car. You put them all together and it’s a great collection just to look at. I can only fantasize about driving one of these cars, much less all of them.

Some quick facts about the 107 cars entered in the 2016 Colorado Grand:

Mercedes is the most popular manufacturer represented with 18, all but one of which are 300SL’s (Gullwings and convertibles, all valued near or above $1 million dollars each). The lone non-300 is a 190SL, the poor cousin which outsold the 300SL in its day.

Ferrari and Jaguar each have 12 cars in the field, including a Jaguar D-type, the model that won LeMans in 1955, 1956 and 1957. It’s worth, according to the “Sports Car Market Pocket Price Guide,” somewhere in the neighborhood of $4 million. The Ferraris are breathtakingly beautiful, inside and out, at once delicate and powerful, and include a 250GT Short Wheel Base Competition that might bring over $16 million dollar at auction.

Aston Martin and Porsche each have nine cars entered in the Grand, while Alfa Romeo has eight, Bentley seven and Maserati five.

Convertibles outnumber closed cars by 68 to 39.

The Colorado Grand serves as a glorious reminder that Colorado is the best place in the world to own and drive a classic car. Or any car or truck for that matter.

The Tin Worm (aka rust), bane of auto collectors the world over, is held at bay by our lack of humidity. And CDOT doesn’t sand and salt the roads like it used to, opting for the somewhat kinder and gentler ice inhibitor magnesium chloride.

The alleged 300 days of sunshine is good news for convertible owners as well as those who don’t enjoy washing their car after every outing.

And best of all, like many of our residents, many of the 88,249 miles of Colorado highways and byways are not straight – Sportscars thrive on corkscrews and switchbacks, esses and twisties of all variety.

And not that we’re a lawless lot, but with six million (that was last Friday’s count) people spread over 104,000 square miles there are vast stretches of open road that beg to be driven at speeds as fast as a car and driver are capable. Cops can’t be everywhere.

Of course, cops were everywhere on Tuesday morning, Sept. 13, as 107 cars set out from Vail for the 28th running of the Colorado Grand, the most fantastic celebration of our state’s asphalt and scenic majesty.