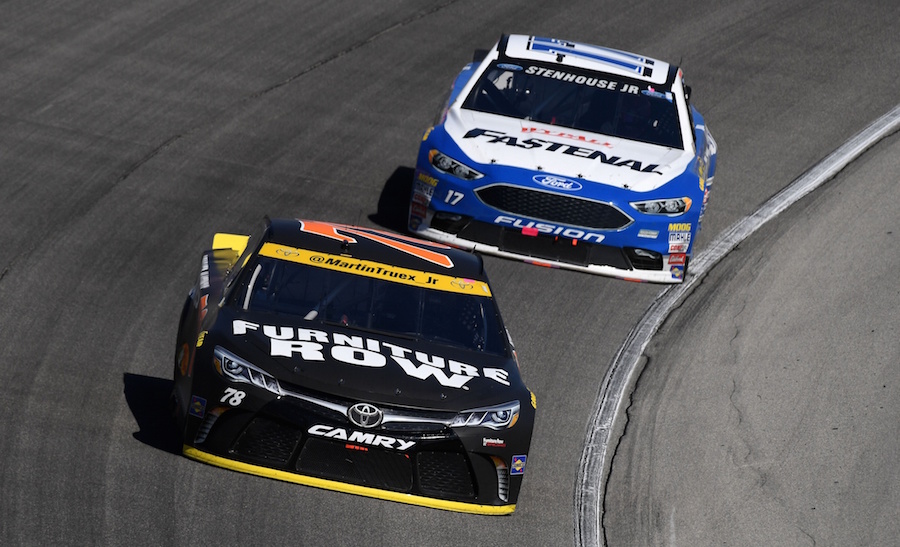 If anyone feels that Martin Truex Jr. is going to take it easy the next two races after winning at Chicagoland Speedway and automatically advancing to the second round of the Chase, is misguided about the racing DNA of the Furniture Row driver.

Truex, who has claimed three victories this season, says he wants to keep the momentum going with his No. 78 Toyota Camry. He is currently the hottest driver on the circuit with two wins and a third-place finish in the last three races.

By leading 32 laps in Sunday’s win at Chicagoland Speedway Truex also took over as the season’s lap leader at 1266. That’s more laps led when combining his previous two season highs of leading laps — 581 in 2007 and 567 in 2015.

“We’re going to New Hampshire with the same attitude and confidence that we had in the first 27 races,” said Truex. “There’s a Truex family fondness for the track with my dad (Martin Truex Sr.), brother (Ryan) and myself winning races there, but never in the Sprint Cup Series. Our Furniture Row/Denver Mattress Toyota had a great run at New Hampshire in July. We led the second most laps (123) and were running second when the shifter broke.”

Crew chief Cole Pearn, who has been atop the pit box for all five of Furniture Row’s victories (one as lead engineer), says nothing will change in terms of strategy for the next two races.

“It’s hard to turn it off and on in this sport,” said Pearn. “We’ll definitely keep plugging away.”

Team owner Barney Visser echoed the same feeling about the team and the next two races, “I don’t think they’re going to let up at all. They enjoy being in Victory Lane and work too hard on the cars to back off at all. Martin enjoys running up front. He is pure athlete.”

When Truex talks about confidence, he is basically saying the single-car Furniture Row Racing team is very capable of winning at any type of track, even the 1.058-mile New Hampshire flat track.
-continued-
“Without a doubt this is the best team I’ve ever had and the best position I’ve ever been in,” noted Truex. “I really feel like we have what it takes to win this championship. Right now I feel like any racetrack, any weekend, anywhere in the country we can win. It’s so much fun to go to the racetrack and have that feeling, have that much confidence in your team and what you’re doing.

“So it feels good. I’m so proud of everyone and thankful. We have two weeks now to keep the momentum going. Hopefully we’ll be able to get a couple of more trophies and then get ready for round two.”

Truex’s record at New Hampshire includes three top fives, seven top 10s and 271 laps led in 21 career starts. His best finish was third in July 2007. He has a 12.7 starting average and a 14.0 finishing average.