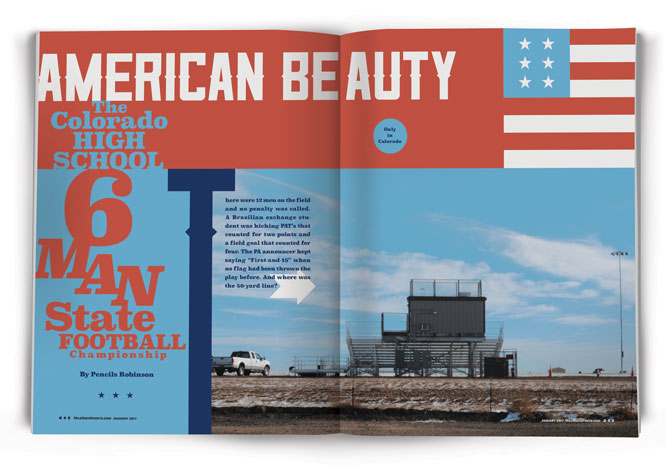 There were 12 men on the field and no penalty was called. A Brazilian exchange student was kicking PAT’s that counted for two points and a field goal that counted for four. The PA announcer kept saying “First-and-15” when no flag had been thrown the play before. And where was the 50-yard line?

Since “Only in Colorado” debuted in January of 2016, all of its stories have emanated from Denver or towns south or west of the Queen City of the Plains, whose citified residents generally don’t know a plain from a prairie. We’ve told tales of Ouray, Durango, Leadville, Morrison, Pueblo, Deckers, Denver and Vail, all worthy destinations known to locals and tourists alike, but what’s going on out on the plains?

Some say, “Nothing.” I say, “Beautiful Nothing.”

The eastern Colorado plains, representing a little less than half the 104,185 square miles of our state, are among the most sparsely populated areas in the continental U.S. So, there tends to be a lot more “nothing” than “something” as you head east.

I like the mountains as much as the next guy (although at Rockies games I don’t cheer when they get to the line in “God Bless America” that says “from the mountains…”). I like the diversity of the scenery in the Rockies. And I like curvy roads. But after a week in which I endured Denver rush hour(s) traffic as well as gridlock on a trip from Eisenhower Tunnel to Denver, “nothing” is a welcome relief.

There’s something comforting about leaving the 2-seater at home and loading up the old Volvo with camera equipment and sweatshirts and windbreakers and defying Horace Greeley and going east, young man. The spirit soars as I see the first 75 mph sign on I-70, followed by the mileage signs for Watkins (12) and Limon (75). Dial the cruise control to 83 (gently sticking it to The Man), click on the iPod’s “Classic Country” playlist and the stress of the city melts away like a lone ice cube in a lemonade stand Kool-Aid.

It’s 120 miles to Seibert. I’m excited to see the game; I haven’t been to a 6-man final in almost 20 years. But I could drive all day. Other than the two semis, which decide to run side-by-side for a few miles, there’s nothing but blue skies, an occasional windmill, a small oil rig, grass and cows and – screw the aspens and runaway truck ramps – a vast expanse of heaven. Peace.

Limon, home of the Badgers and 17 state prep football championships of their own, is there before I know it. Approaching Genoa, I fight off the urge to visit the Wonder Tower at Exit 371 – because who needs to see six states when the one you’re in is the most stunning.

I’m in Seibert before 11 a.m. and thinking I might have a cup of tea and chat up some local residents about the game. But only Seibert Supers is open on Colorado Avenue while the other businesses look like they’ve been long ago abandoned. I drive around for a while, taking in the obvious rural vibe – the grain elevators, the churches and the local fire department. More peace. And quiet.

The school, flanked by I-70 immediately to the south and Highway 24 to the north (seven miles to Vona, whose kids attend Hi-Plains), is the real gem of the town. Only three years old, the K-12 facility is impressive inside and out, obviously well cared for by students and staff.

I’m greeted by Kerry Sayles, the energetic athletic director who coached just about everything at Hi-Plains for 30 years. We’re old professional friends trying to picture what each other looked like 20 years ago. Small town life and being around kids has served her well. She looks fit enough to lead the team in pre-game calisthenics. We finally have to introduce ourselves. She’s busy with game preparation (the game balls mailed Monday by CHSAA are missing) but takes time to show me around with obvious pride in her school. People like Kerry Sayles are the guts and the glue and the gumption that holds small town Colorado schools together.

I head out to the field. The snow from a couple of days ago has been removed and surrounds the healthy grass like white matting in a favorite photo. The field seems small and then I remember 6-man uses an 80 x 40-yard layout. Past the scoreboard and American flag (this is the home of the Patriots) I can see and hear semis barreling east to the Kansas border, just some 40 miles from Seibert.

It’s an hour before game time but the cars from both the locals and the visitors have already begun to surround the field. The home bleachers, topped by a press box, are filling in with what will be close to 300 people by kickoff. On the other side of the field the Cheyenne Wells crowd – those not in their vehicles – are filtering into a smaller and lower set of bleachers on the east side.

The wind is a constant companion, or at least a soon-anticipated guest in eastern Colorado. The day of the championship is no exception. It’s around 40 degrees but feels more like 20. At least the sun is out. Many of the fans will watch the entire game from their pickup trucks, Camaros and big Chryslers. The Hi-Plains team, which looks bigger than expected, is already out in the north end zone, stretching, lobbing casual passes. One kid wears a fur hat with ear flaps.

There are 23 players on the Hi-Plains roster, which includes four freshmen and seven sophomores. Coach Garrett Smith’s Cheyenne Wells team shows 16 players in the program but they’ve got only one freshman and two sophs. The enrollments of the two schools is nearly equal (48 for the Tigers, 45 for the Patriots) but Hi-Plains has inherited a few players – and its head coach Alex Lowther – from Flagler, a long-time rival 11 miles to the east which had to drop its program due to lack of numbers.

I’ve always been fascinated by the numbers involved in small-school athletics. Consider that the state’s largest high school, Cherry Creek, has an enrollment of about 3,500 kids; it would take over 75 years for Cheyenne Wells or Hi-Plains to see that many kids in their classrooms, not to mention their athletic programs.

So, you know going in that you’re not likely to see any Division I prospects. You probably won’t see any members of the CU or CSU’s staff recruiting those big, but mythical, eastern Colorado farm boys.

That’s something beautiful about small-school athletics, particularly 6-man football. Most of the seniors playing in today’s game will probably be competing for the last time in organized football. They’ve busted their guts for four years and this is it. While the hoopla surrounding their game is nothing compared to a 5A final at Mile High Stadium, the game means just as much to these athletes.

Can there be anything purer in an athletic sense than these kids who are not playing for scholarships or media attention but for the love of the competition and the pride they feel for their schools and communities? Are there any greater unsung heroes than those kids who aren’t great athletes and maybe don’t even love football but who join the team because it needs numbers and they want to be with their friends and represent their school?

But don’t think for a minute that these kids don’t compete just as hard and passionately as their 5A counterparts.

The game bears that out. The hitting is ferocious, but often culminates in a player helping an opponent up after a play. The offenses are initially tentative for two teams that averaged over 50 points in their first three playoff games (Cheyenne Wells 57.6; Hi-Plains 54.3), but they soon get on track.

The Patriots, who lost a season-opening matchup against Cheyenne Wells 60-34, take the upper hand as seniors Riley Marzolf and Landon McCaffrey hook up for 40-yard touchdown pass as time ran out in the first half to give the Pats a 39-22 lead.

The two teams spar through the third quarter, then Cheyenne Wells scores with 8:28 left in the fourth to make it 43-36. But from that point, the game belongs to Hi-Plains’ offensive line and Cameron Klann. The 5-foot-10, 170-pound senior hauls in a 64-yard touchdown pass from Marzolf, then three minutes later rushes for a 75-yard score.

After Hi-Plains recovers an outside kick (a common play in 6-man) Klann makes it 66-36 with a 36-yard run. Marzolf and McCaffrey, each of whom is also involved in four touchdowns, join Klann. Brazilian kicker Pedro Teixeira is a major contributor with 16 points on six 2-point PAT kicks and a 43-yard 4-point field goal. The knowledge that they’ll get eight points on almost every touchdown is a huge psychological boost for the Pats.

Cheyenne Wells senior Jaime Huerta guides the Tigers to a final too-little-too-late score and finishes with 186 yards rushing and 107 yards in the air, while gamely eluding the fierce Hi-Plains rush.

The end of the game is different, too, than what one usually sees in a larger classification high school playoff or a big college game. The announcer asks the crowd (which has only to step over a rope to enter the playing field) to stay off the field so that the players can shake hands and receive their trophies. The crowd complies.

The teams shake hands along the 40-yard line with obvious mutual respect. You can see the fatigue on many players, as if they’d just played 40 minutes of fast-break and full-court press basketball. The CHSAA is there, too, as it is at all championship games. Assistant commissioner Ozzello, who grew up 100 miles from Cheyenne Wells in La Junta, presents the trophies, while CHSAA’s director of digital media Ryan Casey snaps photos and tallies up the voluminous stats he kept (and shared) throughout the game.

Then, something transpires that seems foreign to intense football competition in America but also feels right for Seibert, Colorado. The announcer invites members of both crowds to join the players who have kneeled and huddled at mid-field in prayer. Most of the crowd accepts the invitation and joins the players. Although the towns are 70 miles apart, there is a sense of community on the field this afternoon. The spirit that existed throughout the game – I never heard a boo all day from either crowd, never a criticism of an official or an opponent – continues as the fans mingle and linger, reluctant to leave the moment.

Even if someone drove from Denver to Seibert and felt that there was “nothing” to see in eastern Colorado, he would walk away from that 80-yard field with the sense that he had seen “something” special on this November day on the Plains.