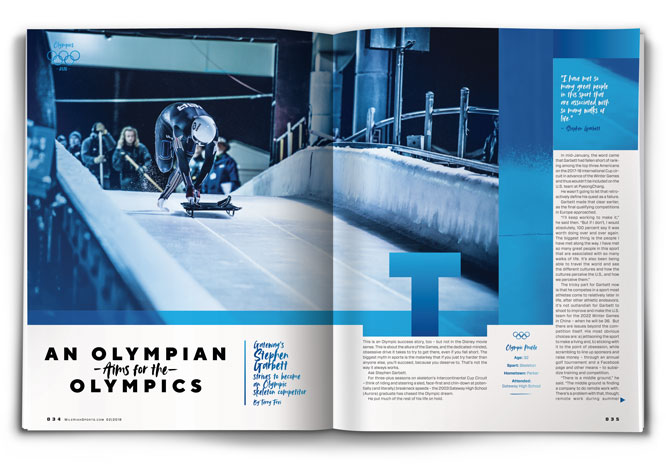 This is an Olympic success story, too – but not in the Disney movie sense. This is about the allure of the Games, and the dedicated-minded, obsessive drive it takes to try to get there, even if you fall short. The biggest myth in sports is the malarkey that if you just try harder than anyone else, you’ll succeed, because you deserve to. That’s not the way it always works.

For three-plus seasons on skeleton’s Intercontinental Cup Circuit – think of riding and steering a sled, face-first and chin-down at potentially (and literally) breakneck speeds – the 2003 Gateway High School (Aurora) graduate has chased the Olympic dream.

He put much of the rest of his life on hold.

In mid-January, the word came that Garbett had fallen short of ranking among the top three Americans on the 2017-18 International Cup circuit in advance of the Winter Games and thus wouldn’t be included on the U.S. team at PyeongChang.

He wasn’t going to let that retroactively define his quest as a failure.

Garbett made that clear earlier, as the final qualifying competitions in Europe approached.

“I’ll keep working to make it,” he said then. “But if I don’t, I would absolutely, 100 percent say it was worth doing over and over again. The biggest thing is the people I have met along the way. I have met so many great people in this sport that are associated with so many walks of life. It’s also been being able to travel the world and see the different cultures and how the cultures perceive the U.S., and how we perceive them.”

The tricky part for Garbett now is that he competes in a sport most athletes come to relatively later in life, after other athletic endeavors. It’s not outlandish for Garbett to shoot to improve and make the U.S. team for the 2022 Winter Games in China – when he will be 36.  But there are issues beyond the competition itself. His most obvious choices are: a) jettisoning the sport to make a living and, b) sticking with it to the point of obsession, while scrambling to line up sponsors and raise money – through an annual golf tournament and a Facebook page and other means – to subsidize training and competition.

“There is a middle ground,” he said. “The middle ground is finding a company to do remote work with. There’s a problem with that, though; remote work during summer training is fine because you have time when you’re able to do it. But once the season and competition start, you focus so much time on competition and training, being able to handle that load is very, very difficult. I have some teammates who do it, but those who do it don’t normally compete at the highest level. It’s very hard to juggle both.

“I would always be willing to look at that stuff, but it’s making sure that it’s not affecting my training, but that I’m also giving that company all it deserves with the employment as well.”

The 5-foot-11, 175-pound Garbett is a part-time resident at the Olympic Training Center in Colorado Springs, living and training there each summer, and that helps. “During the winter, we’re traveling all over the place, competing,” he said. “And when we’re not competing, we’re going to different tracks for training. That’s where it gets expensive, paying for the travel and the training costs.”

After he played junior college football for Cerritos College in Norwalk, Calif., Garbett wound up at the University of South Carolina, in the school’s prestigious sports and entertainment management program, graduating in 2010. He is confident there are business opportunities for him out there – whenever he is ready.

“I’ve actually turned down many great job opportunities so I could do this sport,” he said. “It’s a sacrifice I’d do over again because this is the poorest I’ve ever been in my life, but I’m the happiest. It’s an amazing life and I’m very lucky. There are days when I think of the paychecks my friends are getting and I think, ‘That would be nice.’ But right now, the things I do, I very much enjoy. I normally budget $25,000 to $30,000 a year. That’s about how much I’m paying out of pocket to be able to do this sport and represent my country.

“I wanted to analyze everything at the end of this year. But I know from talking to my coaches, they really want me to come back for another ‘quad.’ That’s where I really have to analyze myself, to see whether the sacrifices are worth being broke for another four years. I believe I’m going to do one more season next year, no matter how this season plays out, just to go from there and have time to analyze whether I want to go the full ‘quad’ or go into the business world.”

Although Parker is listed as his official hometown, Garbett was raised closer to rural Elizabeth, and his family lived there even as he attended Gateway. His parents eventually moved to South Carolina, and that’s one reason he ended up attending college in the state. In the same year he graduated from South Carolina, he was back in Colorado when he became ill and was hospitalized in Lone Tree. First, he was told his body was shutting down, but he improved and was about to be discharged when he underwent an emergency appendectomy.

During his hospitalization, he watched the 2010 Winter Games and was drawn to the skeleton, thinking he could do that. Why not? He was nuts enough to careen downhill, chin inches from the ground. He planned and raised money for three years and started competing in 2013.

“The process of getting into this sport is going to sliding school first,” he said. “Then you go into the development races, and they usually say it takes six to eight years to get to make it on to the national team. After my first team trials, I made it on to the national team and I’ve been on the national team, back and forth, ever since. So, I’ve progressed. This season has actually been my slowest season. I sprained my ankle … and I started this season really, really slow, which has affected placement on the team. But I’ve been working my way up, to try to get back up the ranks. I put myself in a hole, but there’s still a chance to make the team.”

Yet he gave it his best shot – and that’s the Olympic spirit, too.