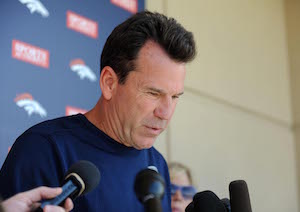 Embattled Broncos defensive end Antonio Smith was not at the team’s first day of voluntary OTAs on Wednesday amidst allegations of child sexual abuse in Texas stemming from a complaint that was initially reported to authorities in November of 2014.

Smith signed with Denver in April after being released by Oakland on March 31.

Head coach Gary Kubiak addressed the media following today’s workout and was immediately asked about Smith’s status, specifically, if he told Smith that he preferred Smith did not participate.

“No, absolutely not.” Kubiak said, “Obviously these are volunteer workouts. But I talked to Antonio late last Wednesday night and he informed me of what the situation was, that there was, obviously, something fixing to come about. He informed me about it. We spent the weekend. I talked to him numerous times. I spent a lot of time with John (Elway) and with Joe (Ellis) and yesterday we met again. Bottom line, between us and Antonio, we just felt like the best thing to do right now is for Antonio to devote all of his energy and time right now to this situation. He agreed with that. We agreed with that. That’s how we came to that conclusion. It’s our understanding – I don’t know that I’m right – but it’s our understanding that we’ll have some answers here in a week or two. I hope that’s the case but the most important thing for him right now is to devote all his time and energy toward this situation. So, we’ll see what happens.”

He was then asked if he would have been comfortable if Smith had been at the facility today.

“The most important thing,” Kubiak responded, “is that we spent a lot of time working on this and we decided the best thing to do was to go about it the way we’re going about it. I’m not going to sit here and talk about what might have been best. We went in this direction. We think it’s best on our behalf and Antonio’s behalf, and we’re in agreement on that.”

The gathered media continued the questioning, asking if Smith’s absence should be considered any kind of punishment or judgment.

Kubiak was quick to say, “Absolutely not. Like I said, absolutely not. This is a bunch of people getting together and talking through a situation and coming to a conclusion together on what we thought was best at this point. So, that’s where we’re at.”

Smith played for Kubiak for five seasons in Houston from 2009-13, so the coach was asked if the veteran was given a little more leeway because of that relationship.

“I have relationships with all the players that I work with,” Kubiak said. “Every guy that I’ve got out here, every guy in this organization. I’ve coached thousands of players throughout the course of my career and I’m always going to do what’s best by the organization and the player. That’s what we’re going to do right here, but we’re going to take our time to do it the right way and hopefully we have some answers here coming soon.”

Kubiak was asked if he wished Smith had said something about the situation sooner.

“You know, I would have loved to have had all the information, yes, at some point, but that’s come and gone. It’s time right now to do the right thing and go about it each day the right way. I’m past that. Right now I’m just trying to proceed with the football team. Guys are working their tail off. We’ve got a lot of great things going on. We just need to stay focused on that and he needs to stay focused on his situation.”