Two weeks in, and the AFC West is looking like one of the NFL’s most difficult divisions.

The Las Vegas Raiders and Denver Broncos are performing well-above expectations, while the Los Angeles Chargers continue to flash their high-end potential, and the Kansas City Chiefs are still the Chiefs.

With all that in mind, can the Broncos challenge for the top spot in the division? Let’s take a look.

Last week, we opened by saying the Kansas City Chiefs deserved the top spot in these AFC West power rankings until proven otherwise, and on Sunday, we were proven otherwise.

The Chiefs lost in primetime to the Ravens — which we’ll soon discuss in more depth — a team the Raiders beat in Week 1. Not only did the Raiders beat the Ravens, but it also appeared that Baltimore had a tougher time with Las Vegas’ offense than they had with Kansas City’s, especially down the stretch when Derek Carr operated as a buzzsaw.

Meanwhile, also on Sunday, the Raiders rolled past the Pittsburgh Steelers.

Las Vegas’ now-competent defense managed to bottle up Pittsburgh’s still-anemic offense, while Derek Carr led the team down the field for points over and over again, against what appears to be one of the best defenses in football. Gaining over 400 yards against the Pittsburgh Steelers is highly impressive.

Carr doesn’t appear to be quite at the level he displayed early on in the 2020 campaign, but he is playing well above the game manager role he occupied from 2017-2019.

The Broncos have looked awesome too, and have done everything you would ask them to do against poor opponents, but the Raiders have already proven themselves against some of the AFC’s top competition.

Let’s get the counter argument out of the way right now. Yes, these two stellar showings came against lackluster opponents in the Jacksonville Jaguars and New York Giants. No denying that.

However, this isn’t the NCAA, where the Broncos are able to schedule their own opponents. These are the cards they’ve been dealt, and you couldn’t have asked them to do anymore, with two decisive victories that were much closer to thunderous blowouts than the final scores project.

The Giants were spotted three-or-seven points when Logan Ryan’s out-of-bounds fumble recovery wasn’t reversed, and they were spotted six more when they scored a completely meaningless touchdown on the last play of regulation.

Meanwhile, the Jaguars’ only points came on a kickoff return for a touchdown, and an opening drive touchdown that would have been a three-and-out, if not for a laughable illegal contact penalty called on Kyle Fuller. Plus, the Broncos were inside the redzone when time expired, and could have potentially been able to expand their lead to 17, had they not decided to kneel.

On top of them passing the subjective eye test, they’re also an analytics darling. 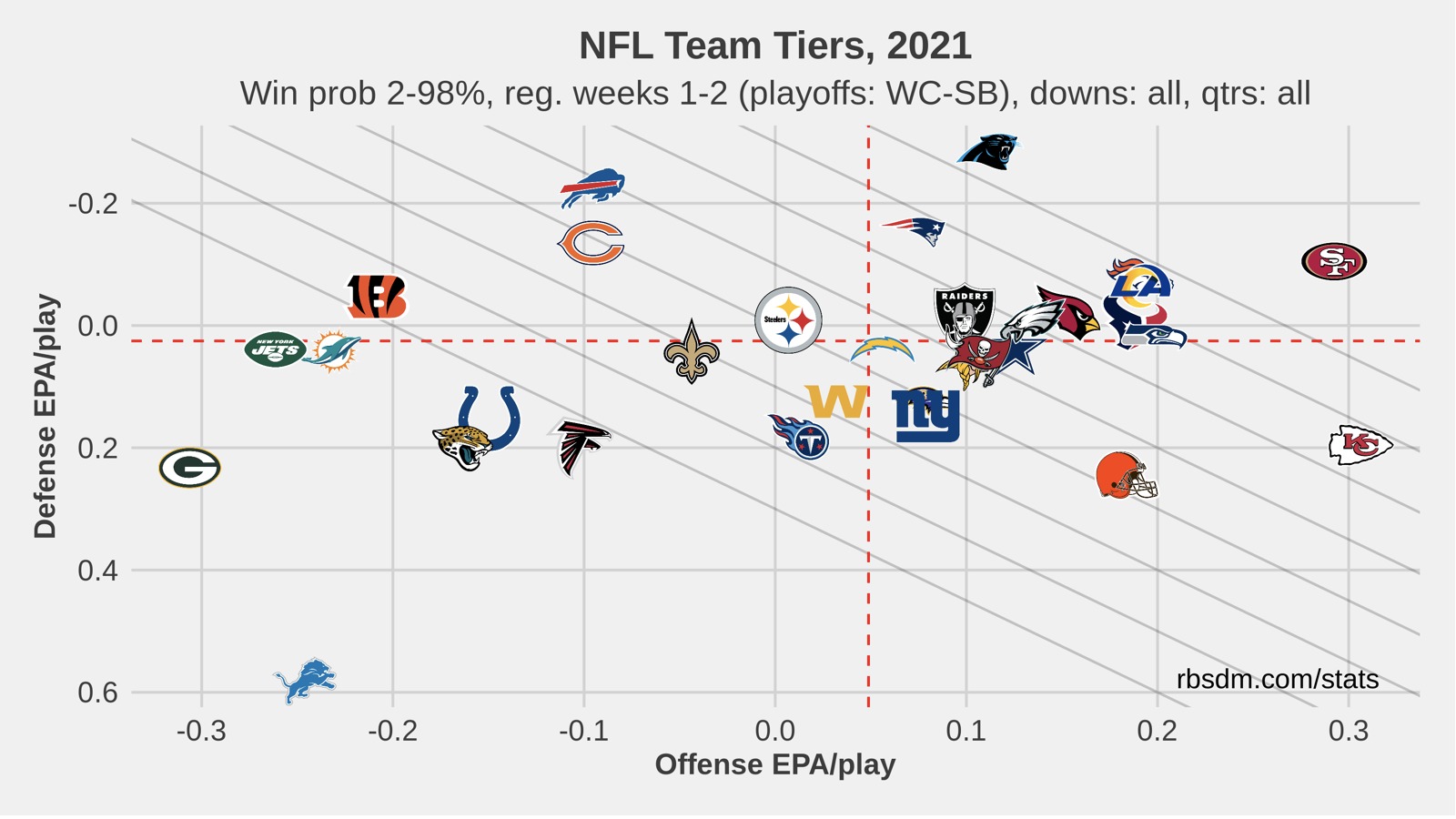 They rank fourth in offensive expected points added (EPA) per play and sixth in defensive EPA per play. That’s good enough to put them in a tier of just them and the Los Angeles Rams, behind only the Carolina Panthers and San Francisco 49ers in terms of overall performance.

The metric EPA+CPOE (completion percentage over expectation) composite, which attempts to adjust to the quality of the opponent, has also been wildly impressed by the play of quarterback Teddy Bridgewater, ranking him only second to Patrick Mahomes 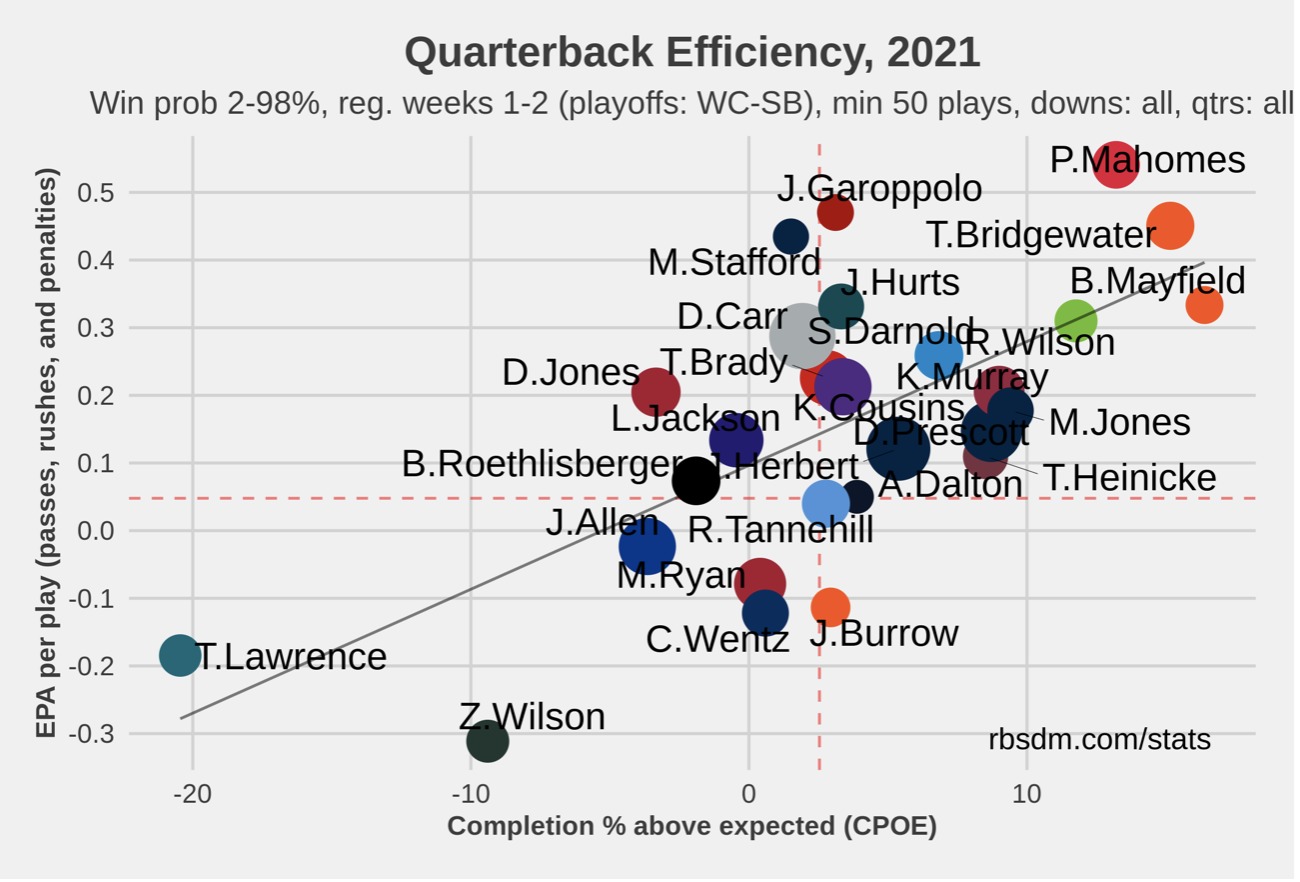 It’s not just EPA and CPOE though, as other advanced analytics like DVOA (defense-adjusted value over average) also view the Broncos as a top 10 team in football. The Broncos rank ninth overall, but sixth in offensive DVOA, as it’s the defense holding the team’s overall ranking back.

The Chiefs suffered their first loss of the season, and for the first time since 2018, they find themselves outside first place in the AFC West.

Now, it definitely isn’t time to sound the alarms for the Chiefs. Their offense still looks highly explosive and they only narrowly lost on the road to another AFC contender, but this also appears to be less of a juggernaut than the Chiefs of years past.

The offensive line, for all the offseason hype, is merely acceptable. Orlando Brown doesn’t appear to be worth the draft picks Kansas City sacrificed, or the massive contract they’ll likely be forced to pay him, but he is an upgrade.

While the offensive line appears fairly average, Kansas City’s skill group has taken a big step back, as the depth behind Travis Kelce and Tyreek Hill could not get the job done in Baltimore, leading to K.C. scoring on just four of their nine offensive possesions. That’s not bad for most teams, but it’s awful for Kansas City.

As was the case a week ago, none of these AFC West teams had a truly poor showing, so the Chargers ranking last in these power rankings shouldn’t be viewed as too big of a critique.

With that said, there is cause for some level of concern with this team and Justin Herbert through two weeks.

Although Herbert continues to create some of the most impressive plays in football each and every week, the results have not matched the highlight-reel-worthy peaks.

The Chargers were mostly bottled up by the Washington Football Team’s defense in Week 1, only for the Giants to come in and torch that same defense, as Daniel Jones had one of the best games of his career.

Then, in Week 2, the Chargers manage to only score 17 points against a Cowboys’ defense that is missing their best and most valuable defensive player in Demarcus Lawrence, along with several other edge rushers. In fact, the Cowboys’ depth at edge was so poor, they had to take their rookie inside linebacker and move him to edge. Sure, Micah Parsons has the talent to handle that task, but it’s telling that the Cowboys were forced to move him, instead of focusing on furthering his development at inside linebacker.

Meanwhile, the Cowboys offense had little-to-no trouble attacking the Chargers defense. This was epitomized on the game-winning drive, win the Dallas offense didn’t even break a sweat, despite the game being on the line.