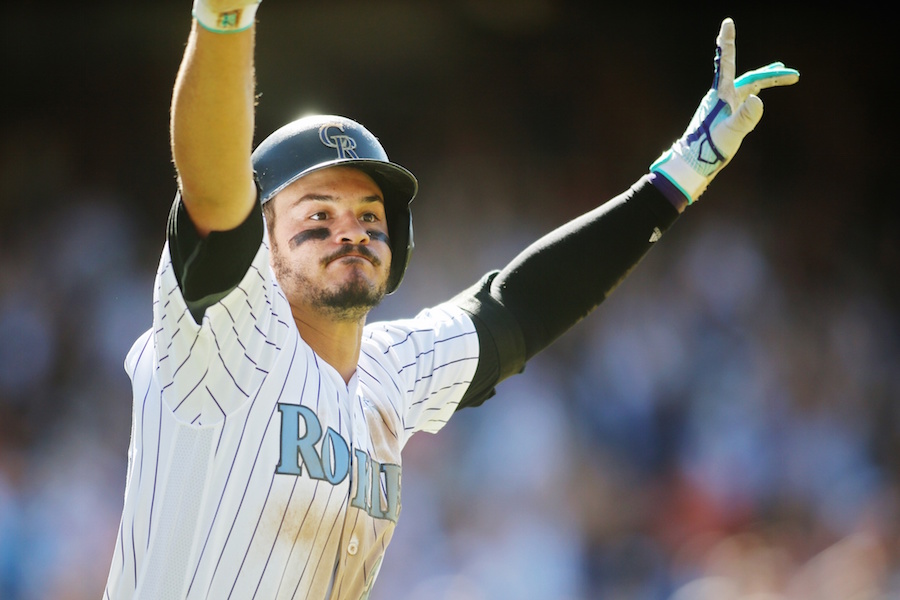 Father’s Day afternoon at Coors Field swept the Colorado Rockies faithful off their feet with gorgeous weather and walk-off baseball. The Rockies completed a four-game sweep of the San Francisco Giants, winning 7-5 on Sunday thanks to a walk-off home run from Nolan Arenado in the bottom of the ninth inning. Arenado not only won the game with a three-run shot to left-field, but he also completed the cycle, finishing 4-for-5 with four RBIs.

Both starting pitchers, Tyler Chatwood for the Rockies and Ty Blach for the Giants, went into the fifth inning scoreless, but after the lineups flipped to the third time around, the hitters got to the pitchers. Chatwood pitched six solid innings, continually building on the month of June, where he has pitched 6.0 or more innings in four of last five games. His 114 pitches Sunday tied a season-high. Chatwood only allowed two runs on a home run he gave up to Brandon Crawford in the fifth inning. Walks however plagued Chatwood once again, walking four batters, including the man that scored off the Crawford home run. Chris Rusin and Jordan Lyles pitched the seventh and eighth, allowing no runs, before things got interesting. In the bottom of the ninth, Jake McGee surrendered a two-run home run to give up the lead. He then let in another run on a single and a double. Carlos Estevez earned the final out in the top of the ninth, and thus the win.

A former Regis Jesuit High School pitcher, Blach made his first career start in Denver, going 6.2 innings. The Rockies offense got a jolt in the seventh off Blach, when Trevor Story sent a 1-1 pitch over the left field wall for his 10th home run of the season, tying the game, 2-2. Later in the inning, Pat Valaika hit a pinch-hit home run a couple feet away from where Story’s home run landed, giving the Rockies a 3-2 lead. But those dramatic home runs paled in comparison to the one Arenado hit off another Colorado native – Mark Melancon. After DJ LeMahieu drove in Raimel Tapia to get the Rockies within one in the bottom of the ninth, Nolan delivered his fourth and biggest hit of the game. With LeMahieu on first and Charlie Blackmon on third, Arenado deposited the first pitch he saw from Melancon over the left field wall to complete the cycle, the walk-off win and the sweep in what was hands-down one of the most exciting of Colorado’s 46 wins this season.

After an off day Monday, the Rockies stay at Coors Field, when they open a three-game series with the Arizona Diamondbacks.