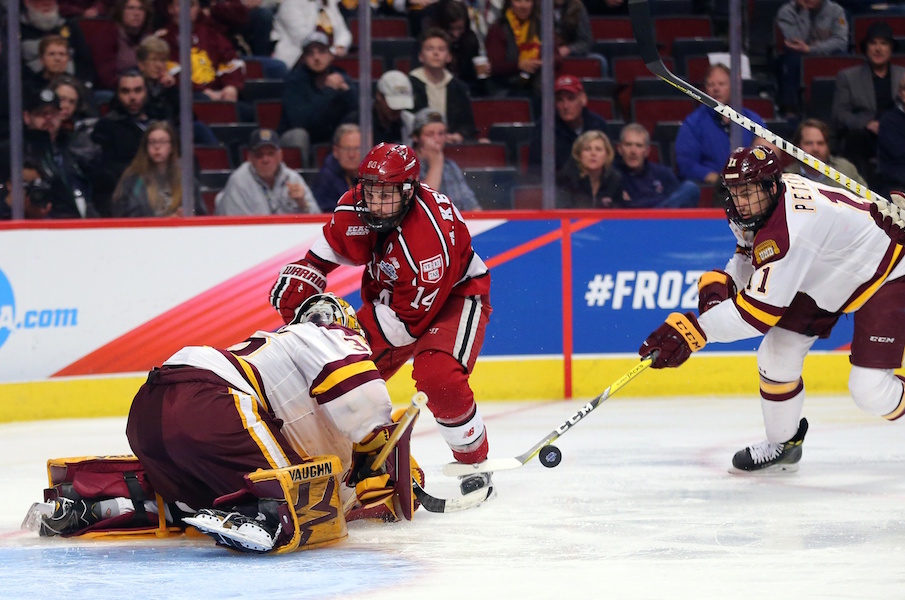 The Colorado Avalanche announced Thursday that the team has signed forward Alexander Kerfoot to a two-year, entry-level contract through the 2018-19 season. Kerfoot became a college free agent on Aug. 15.

Kerfoot, 23, spent the last four seasons at Harvard University, where he served as the team’s co-captain as a senior in 2016-17. Kerfoot tallied 16 goals and 45 points (16g/29a) in 36 games during his senior campaign, helping Harvard to the ECAC and Ivy League championship and eventually a trip to the NCAA Frozen Four, the program’s first since 1994. The Vancouver, British Columbia, native was a finalist for the Hobey Baker Award and earned NCAA (East) Second Team All-American, ECAC Hockey First Team, All-Ivy League First Team and New England D-I All-Star honors.

“We are thrilled that Alexander decided to sign with the Avalanche,” Avalanche Executive Vice President / General Manager Joe Sakic said in a release. “He’s a highly-skilled, playmaking center who is responsible at both ends of the ice. We look forward to seeing him take the next step of his hockey career with our organization.”

Kerfoot’s 45 points tied him for the team lead in scoring while he finished second on the Crimson in power-play goals (8) and game-winning tallies (4-tied).  He registered four assists in three contests during the NCAA tournament before Harvard lost in the national semifinals to Minnesota Duluth. The 5-foot-10 and 175-pound center also helped Harvard win the Boston-area Beanpot championship in February, the school’s first tournament title since 1993. Kerfoot ended his four-year college career with 123 points (36g/87a) in 121 contests.

Selected by the New Jersey Devils in the fifth round (150th overall) of the 2012 NHL Draft, Kerfoot played two-plus seasons with the Coquitlam Express of the British Columbia Hockey League before enrolling at Harvard. He scored 33 goals and added 55 assists in 72 career games with the Express from 2010-11 to 2012-13. He was named to the BCHL (Coastal) First All-Star Team and All-Rookie Team in 2011-12.

Kerfoot is the second college free agent to sign with Colorado in the past week, as the club inked forward Dominic Toninato to a two-year, entry-level contract on Aug. 16.