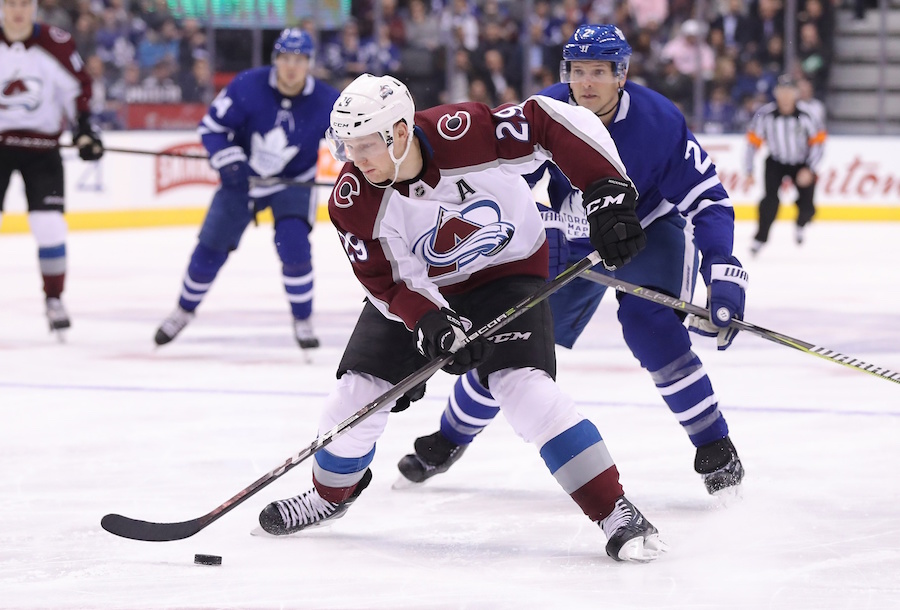 All good things must come to an end, and Tuesday night the Avalanche saw their incredible 10-game win streak come to a halt against the Montreal Canadiens. Colorado, having played the night before, looked exhausted and let Montreal skate circles around them for most of the evening. In the crease, Jonathan Bernier looked sluggish and finally showing signs of needing rest after 10 consecutive starts. Despite the rough night, there is reason for hope for arguably the hottest team in the league.

With 57 points, Colorado sits in the second Wild Card spot in the Western Conference — tied in points with Minnesota, but with one more win and a game in-hand.

The Avs have the NHL’s No. 2 scorer in Nathan MacKinnon, who’s as hot as any player in the league right now. MacKinnon scored one of Colorado’s goals in the 4-2 loss and has points in 10 of his last 11 games. His red-hot play last week earned him the NHL’s First Star award for the week. But MacKinnon cannot do it alone.

The next month will not be terribly friendly to the Avalanche, as 11 of their next 14 games are away from Pepsi Center. While there is a difficult road ahead, the Avs will have a chance to solidify their playoff standing. Over this span only five of the 11 upcoming away games are against current playoff teams (St. Louis twice, Winnipeg twice, and Calgary).

Those four games against their division rivals, the Blues and Jets, will be pivotal in shaping the playoff picture. Colorado currently trails St. Louis (61 points) and Winnipeg (65) in the standings. If the Avalanche can return to Colorado at the end of February with a winning record in those four major away games, then add wins against some of the weaker teams during the road stretch, the team will be in great position as the final full month of the season approaches. It will be a difficult task, without a doubt, but these are games they need to win if Colorado wants to make it back to the playoffs.

The upcoming road trip will truly test the team’s ability to be a consistently great team. Colorado has been dominant at home (18-7-1), but mediocre on the road (9-10-2). Playing solid hockey no matter the venue will be a key factor of any success the Avalanche have this season.

So far this season the young club has been relatively consistent, showing the ability to rebound well after a loss. In recent seasons one bad loss seemingly sent the team into a downward spiral where winning a game became virtually impossible.

Other positive news is that goaltender Semyon Varlamov and defenseman Tyson Barrie could both return after the All-Star break, giving the Avalanche some veteran reinforcements on the defensive end.

One of the things the Avalanche accomplished over their 10 game win streak was playing great defense. The Avs had an imposing 1.5 goals against average over that time span. They will be a tough team to beat even on the road if they can consistently play stout defense.

With MacKinnon, a potential Art Ross Trophy (points) winner and Hart Trophy (MVP) contender, leading the powerful offense, the Avalanche should have no problem scoring goals. If they can stick to playing consistent defense, the club should find themselves in great position to make the playoffs.