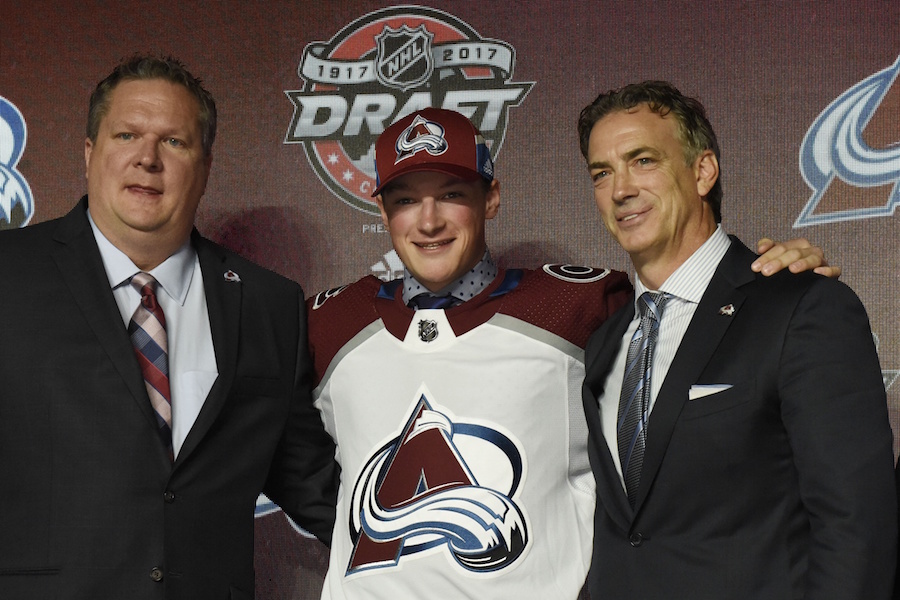 The 2018 IIHF World Juniors will be starting up today, and a couple of Avalanche draft picks will be seeking the gold medal with Team Canada, as Cale Makar and Conor Timmins will be a part of a deep defensive Canadian squad.

Both players were drafted by the Colorado Avalanche in the 2017 NHL Entry Draft, with the highly touted Makar being drafted with the fourth overall pick. Timmins had to wait a little bit longer for his name to be called, but eventually, Joe Sakic and the Avalanche selected him with the 32nd pick of the 2nd round.

Both players are spending time with their respective collegiate, and junior teams to further their development before making the jump to the NHL. Makar is at the beginning of his NCAA career with the University of Massachusetts-Amherst, while Timmins has rejoined the Sault Ste. Marie Greyhounds of the Ontario Hockey League.

Being in his first year with the Minutemen, Makar has played a large part in the university turning around their hockey program, as the Minutemen hold a 9-7-0 record — a drastic improvement over the 5-29-2 record that they would finish with last season.

Although Makar only has nine points in the 16 games played with the Minutemen, Makar is providing the team with exceptional defensive play as he has a team-high of plus-7 — something that should excite Avalanche fans as he approaches his jump to the NHL.

Along with having success on the collegiate stage, Makar is no stranger to the international stage. As shown in the video below, Makar is capable of providing an offensive spark for his team and can single-handedly shift the momentum of any game.

Now in his third season with the Greyhounds, Timmins continues to display his offensive impact — as he has recorded 34 points in the 28 games played this season.

Timmins will play a large role for Team Canada, as they seek to claim the gold medal at this year’s World Juniors after falling short the previous tournament in the championships to Team USA in a thrilling game that ended in a shootout.

Timmins’ Greyhounds, who currently are the OHL’s top team, are heavy favorites to win the OHL’s Robertson Cup, and thus, are a favorite to win the Memorial Cup as well.

Drafted by the Avalanche in the 2nd round of the 2017 NHL Entry Draft, and being sent back down to his junior team during the Avalanche training camp, Timmins is making it a mission of his to make the leap up to the NHL sooner rather than later.

Team Canada will first play Finland on the first day of group-stage action, with puck drop being scheduled for 4 PM ET.

With the combination of plenty of skill level on the Team Canada roster, these two draft picks will fill in nicely, and will truly be a force to be reckoned with as the team will seek to claim the gold medal in Buffalo.