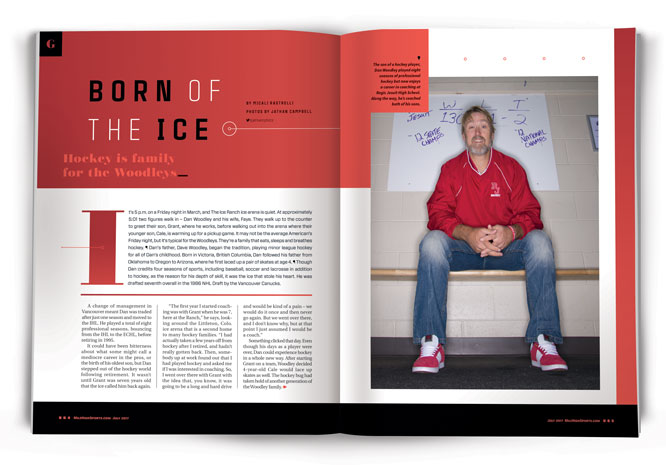 It’s 5 p.m. on a Friday night in March, and The Ice Ranch ice arena is quiet. At approximately 5:01 two figures walk in – Dan Woodley and his wife, Faye. They walk up to the counter to greet their son, Grant, where he works, before walking out into the arena where their younger son, Cale, is warming up for a pickup game. It may not be the average American’s Friday night, but it’s typical for the Woodleys. They’re a family that eats, sleeps and breathes hockey.

Dan’s father, Dave Woodley, began the tradition, playing minor league hockey for all of Dan’s childhood. Born in Victoria, British Columbia, Dan followed his father from Oklahoma to Oregon to Arizona, where he first laced up a pair of skates at age 4.

Though Dan credits four seasons of sports, including baseball, soccer and lacrosse in addition to hockey, as the reason for his depth of skill, it was the ice that stole his heart. He was drafted seventh overall in the 1986 NHL Draft by the Vancouver Canucks.

A change of management in Vancouver meant Dan was traded after just one season and moved to the IHL. He played a total of eight professional seasons, bouncing from the IHL to the ECHL, before retiring in 1995.

It could have been bitterness about what some might call a mediocre career in the pros, or the birth of his oldest son, but Dan stepped out of the hockey world following retirement. It wasn’t until Grant was seven years old that the ice called him back again.

“The first year I started coaching was with Grant when he was 7, here at the Ranch,” he says, looking around the Littleton, Colo. ice arena that is a second home to many hockey families. “I had actually taken a few years off from hockey after I retired, and hadn’t really gotten back. Then, somebody up at work found out that I had played hockey and asked me if I was interested in coaching. So, I went over there with Grant with the idea that, you know, it was going to be a long and hard drive and would be kind of a pain – we would do it once and then never go again. But we went over there, and I don’t know why, but at that point I just assumed I would be a coach.”

Something clicked that day. Even though his days as a player were over, Dan could experience hockey in a whole new way. After starting Grant on a team, Woodley decided 4-year-old Cale would lace up skates as well. The hockey bug had taken hold of another generation of the Woodley family.

Still, he wanted his sons to be well-rounded athletes. He put them in baseball and lacrosse, but it didn’t last long. Hockey soon became an all-consuming sport, and the boys seemed to love it as much as their father and grandfather before them.

After coaching Grant’s recreational team, Dan stepped it up a notch and accepted the head coaching position at Regis Jesuit High School in 2005. The Raiders hockey team has been a 5A powerhouse ever since, going undefeated and winning back-to-back state titles in his early years as coach.

In his 12 years with the team, Dan has won four state championships, two national championships and coached each of his sons along the way. Grant graduated from Regis in 2012, Cale in 2016. Both played hockey for their father.

“They both had the opportunity to be on very good and successful teams. And getting the opportunity to coach them to that success? That was sort of fun,” Dan says with a grin. “There was one instance where Cale’s team won a state title and we were up against an undefeated team that had whooped us the year before, and nobody thought we had a chance. We won the game in overtime. Just having the great success that both of these guys have had, and be part of it, enjoying that success was the best for me.”

Making your coach proud is a great feeling, but having that coach be your father brings that sense of pride to new heights. But that family tie wasn’t always easy.

“It was really hard for me,” Cale says, fiddling with his hockey glove. “We used to argue a bit in practice, because I always had my opinions, and he was easy to talk to because he was my dad. So, I would argue and get in his ear a little bit. We figured it out eventually. Took a few years, but we did it.”

Grant’s perspective has changed since high school, after he decided to jump behind the bench with his father this last season.

“When you’re playing, you sometimes don’t think about who is coaching you. You’re just happy to be playing,” Grant says, straightening his red polo. “As a coach, I have seen all of the things that the coaches have to consider. Now, I can understand the decisions he made when I was playing – decisions I may have disagreed with at the time, but it gives me a better perspective.”

One thing both boys can absolutely agree on? Their father’s incredible coaching abilities and the impact he has had not only on Regis’ hockey program, but also on the players themselves.

“He doesn’t pick favorites ever; he puts everybody on the ice,” Cale says. “He’s not going to play one line and try to win with one line; he’s going to use every line he chose for the team. That makes everybody confident and builds strength and character.”

“He’s good at picking out the strong and weak points in a player and getting them on the ice when their strengths can shine through. And he doesn’t over-exaggerate their weaknesses.”

Dan’s bearded face glows slightly at his sons’ praise, a small smile reaching his bespectacled eyes. Does he agree with the boys’ assessment?

“It’s hard to say. I mean I never talk about myself. But I think getting to know the players – every one of them, individually, where they’re strong, how they interact socially, and what bothers them or makes them happy – really is an advantage,” he says. “I try to know who I’m coaching before I set the direction.”

His love of hockey, both as a player and as a coach, has permanently rubbed off on his sons. Cale is in the process of training to play professionally in Canada, while Grant has already signed on to coach at least another season at Regis.

And how could they not? A dusting of ice has blanketed them since childhood, dominating dinner conversations and car rides to school. Not in an overbearing manner, but in a way that they can’t help but share the immense love their father has for the sport that brings them all together.

Though both sons have graduated, Dan says he will stick around the Regis ice rink for the foreseeable future, as much for the players as for the memories he has made with his sons.

“You know, I tried to get noticed at higher levels, and maybe get the opportunity to move up, but those don’t seem to be easy to get,” he says. “I have a wonderful job at Regis Jesuit where I have been allowed to develop the program into my likeness, what I want it to be.”

He looks at both sons. Cale in his full hockey gear, leaning on his stick, and Grant, dressed in the uniform of The Ice Ranch, both waiting patiently. Dan glances down at the counter before speaking again.

“I really loved coaching them as players, because every time they would go on the ice my eyes go to them first. I’m watching them and watching the success they’re having. Obviously seeing your sons have success on the ice is incredible,” he says. The pride he feels for his sons evident. “But eventually, you know, hockey comes to an end, and I can’t coach them anymore. So, to get an opportunity to have Grant come back on the bench and coach with me, I am super proud of watching him develop as a coach and a young man. It has just added to the whole pleasure of being around hockey.

“It’s nothing but fun to see your kids excel.”