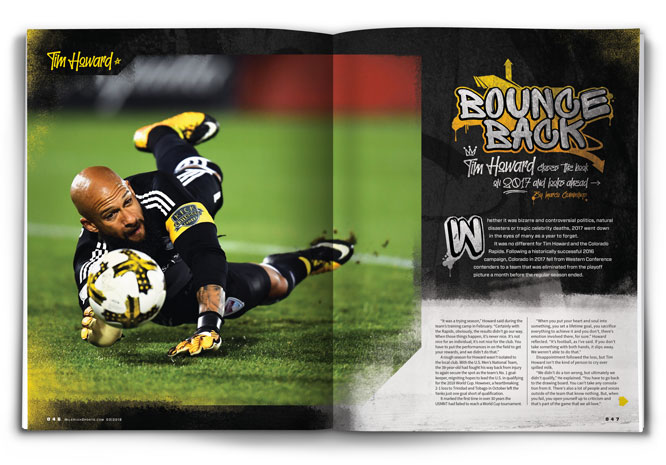 Whether it was bizarre and controversial politics, natural disasters or tragic celebrity deaths, 2017 went down in the eyes of many as a year to forget.

It was no different for Tim Howard and the Colorado Rapids. Following a historically successful 2016 campaign, Colorado in 2017 fell from Western Conference contenders to a team that was eliminated from the playoff picture a month before the regular season ended.

“It was a trying season,” Howard said during the team’s training camp in February. “Certainly with the Rapids, obviously, the results didn’t go our way. When those things happen, it’s never nice. It’s not nice for an individual; it’s not nice for the club. You have to put the performances in on the field to get your rewards, and we didn’t do that.”

A rough season for Howard wasn’t isolated to the local club. With the U.S. Men’s National Team, the 38-year-old had fought his way back from injury to again secure the spot as the team’s No. 1 goalkeeper, reigniting hopes to lead the U.S. in qualifying for the 2018 World Cup. However, a heartbreaking 2-1 loss to Trinidad and Tobago in October left the Yanks just one goal short of qualification.

“When you put your heart and soul into something, you set a lifetime goal, you sacrifice everything to achieve it and you don’t, there’s emotion involved there, for sure.” – Tim Howard

It marked the first time in over 30 years the USMNT had failed to reach a World Cup tournament.

“When you put your heart and soul into something, you set a lifetime goal, you sacrifice everything to achieve it and you don’t, there’s emotion involved there, for sure.” Howard reflected. “It’s football, as I’ve said. If you don’t take something with both hands, it slips away. We weren’t able to do that.”

Disappointment followed the loss, but Tim Howard isn’t the kind of person to cry over spilled milk.

“We didn’t do a ton wrong, but ultimately we didn’t qualify,” He explained. “You have to go back to the drawing board. You can’t take any consolation from it. There’s also a lot of people and voices outside of the team that know nothing. But, when you fail, you open yourself up to criticism and that’s part of the game that we all love.”

There are parallels to be drawn between Howard’s club and country. Both experienced the challenges of injuries, suspensions, travel and coaching uncertainty. The Colorado Rapids’ firing of manager Pablo Mastroeni in August, less than a year after the U.S. sacked Jürgen Klinsmann, meant that Howard would play under four different head coaches between the two teams during a nine-month span.

Howard acknowledged the unfortunate consequences of someone losing their job, but in his more than two decades around the sport, he’s seen it all before.

“These things happen,” said Howard. “Players come and go. You watch your best friend get traded or signed to another club and you don’t speak to them as much. There’s still a job to do, so you wish your manager well and move forward.”

Poor results led to Mastroeni’s dismissal. At the time, Colorado sat in 10th place in the 11-team Western Conference, with a 6-12-4 record. It’s where the Rapids would finish the season, just above the last place L.A. Galaxy, another playoff team the year prior.

But that’s the beauty of MLS. Teams can go from first to worst, or worst to first, within the span of a season. It gives the Rapids ‘keeper confidence in a turnaround heading into a new campaign.

“I think that factor in MLS is exciting and important. MLS has shown historically that teams can bounce back, make the playoffs and win championships the next year,” Howard said. “It doesn’t have to be a three- and four-year process. It can be immediate if you put the work in.”

The goal of becoming a perennial playoff team is one the Colorado Rapids are invested in club-wide, as Rapids GM Pádraig Smith and chief business officer Wayne Brant outlined in a Denver Post op-ed back in August.

It was a move respected and embraced by the players.

“At the time, I think there were a lot of eyebrows raised,” Howard said of the editorial. “My hat goes off to them in a major way for being steadfast and trying to execute, and they’ve done it ten-fold. I’m very excited about what they’ve built here and what we’re trying to build. It just shows that it wasn’t lip service and there was a clear vision.”

After a long offseason, that vision has begun to take shape again with several moves by the front office. The changes started with the hiring of new manager Anthony Hudson, in addition to signing more than 11 new players to the roster in the transfer window and the draft.

From Howard’s perspective, it brought a new excitement and energy to the locker room as the Rapids prepared for the 2018 campaign.

“We’ve brought in an abundance of players simply because we had to revamp the roster,” said Howard. “What I’m most excited about is the leadership that we’ve brought in – guys who have experience who are no-nonsense guys, who put in the work, who have been in the trenches and ultimately will hold the team to a higher standard.”

Despite being two years his senior, Howard is also equally enthusiastic to work under the new manager.

“Anthony Hudson is a brilliant young manager who really has incredible ideas and is steadfast in his approach to those ideas and teaching those ideas,” he said of the Rapids’ new hire. “All of the great managers I’ve been around have been great teachers. Coaching is straightforward. Anybody can be a good coach. But to be a great coach you have to be able to teach, and one of his greatest strengths is his ability to teach his players what he expects of them.”

In his third season with Colorado, Howard exudes the air of his position as the club’s captain. Healed from the sting of last season’s failures and free from the distractions of international duty, he’s eager to give Colorado his full attention this season.

“When I only have my club career to focus on that will certainly keep me on the straight and narrow in focusing on Colorado and the results,” he said. “It’s a big year for us. Last year we didn’t do the job that was asked of us, so this year the onus is on us to make sure we turn things around and do that. I’m looking forward to being in with these guys and getting the results.”

While a year older, the Rapids will also be getting a player who’s refreshed and physically fit in 2018.

Entering last season, Howard was focused on returning from a fracture of the right adductor longus, located in the upper groin. His recovery started with surgery in November of 2016 and kept him sidelined until the Rapids’ second regular season game of 2017.

This time around, he’s benefitted from a full and “normal” offseason. Instead of being preoccupied with the World Cup, he’s spent quality time watching his kids plays sports and adding to his tattoo collection. Instead of rehab, he’s spent time working on strength and conditioning to come back stronger than ever.

“This preseason feels miles different,” Howard said. “I’ve been able to do a lot of strength work to fight to be in top condition. That way I’ve been able to come into preseason stronger than ever. I’m not worried about an injury as much as I am trying to help this team come together and do great things in 2018.”

The 2017 season will survive in the history books and in the memories of soccer fans in Colorado and across the United States. For the man who weathered all its ups and downs firsthand, it will be an easy one to put out of mind and move on from.

“I can compartmentalize it because that was season number 20 for me and this is season 21,” said Howard. “They’ve not all been smooth sailing, so I’ve come to realize you don’t get yourself down and you move on and keep pushing forward. You can get bogged down with a losing mentality.

“It’s important that everyone is looking forward instead of back.”