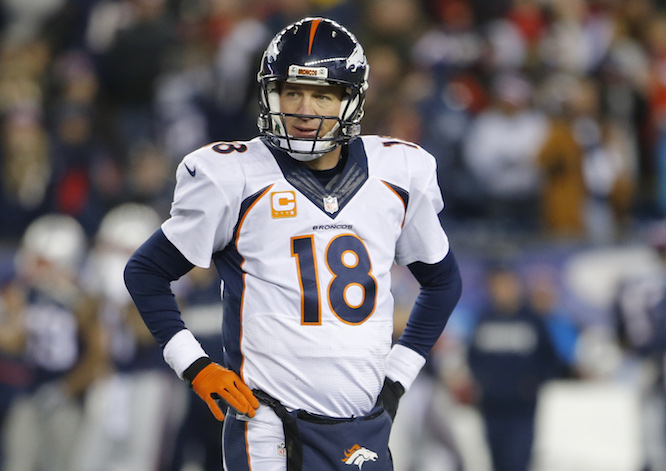 As if the whole Peyton Manning saga couldn’t get any more intense, things jumped to a whole other level Saturday night.

According to a Huffington Post piece based on a documentary by Al Jazeera America, which will air Sunday December 27, Manning is reported to have used HGH (Human Growth Hormone) back in 2011 following multiple neck surgeries.

The report says that Manning connected with Charlie Sly, a pharmacist based out of Austin, Texas working for an anti-aging clinic. In the documentary, Sly is caught (on a secret video) saying he was “part of a medical team that helped [Manning] recover” from the surgery. He continues by saying that he sent the drugs to Manning’s wife, Ashley Manning, so that Peyton’s name would never be attached to the clinic.

“All the time we would be sending Ashley Manning drugs,” Sly says in the video. “Like growth hormone, all the time, everywhere, Florida. And it would never be under Peyton’s name, it would always be under her name.”

As you might imagine, Manning’s camp denies any wrongdoing.

“[Manning] has never done what this person is suggesting,” his agent told Al Jazeera. “The treatment he received at the Guyer Institute was provided on the advice of his physician and with the knowledge of team doctors and trainers.”

“Any medical treatment received by Ashley is a private matter of hers, her doctor, and her family,” the agent said.

Personal statement from Peyton Manning released by the Broncos … pic.twitter.com/O5pJuwzWGF

Plus, Charlie Sly, the physician that reportedly supplied Manning with the drugs, recanted his accusation almost immediately following the report.

Apparently this is the dope-dealer who accused Manning of dope, recanting his accusation (via @AllbrightNFL) https://t.co/BtNv9qP0xq

On Sunday, the Broncos issued the following statement regarding the incident:

Also on Sunday, NFL.com writer Ian Rapoport spoke with Manning’s spokesman, former White House press secretary Ari Fleischer, who said Manning never used HGH, never failed any league drug tests and this won’t affect his status. Fleischer did, however, confirm that Manning’s wife, Ashley, was a patient at the clinic and that she had a prescription but would not identify for what. Fleischer now works in crisis management and his services have been retained by Manning, according to Rapoport.

Peyton Manning retained the services of former WH Press secretary Ari Fleischer, who now does crisis management. I spoke to him last night

Manning spokesman did say Peyton's wife was a patient at this anti-aging clinic in question. She had a prescription, wouldn't say for what

The report aired as scheduled on Al Jazeera America on Sunday night.

In the report, Al Jazeera America cited “one of America’s leading experts” in the use of HGH, Dr. Alan Rogol, an endocrinologist and professor of pediatrics at the University of Virginia School of Medicine whose research is in growth and development at puberty, per the university’s website. He “has advised governments and sporting communities on [HGH’s] misuse.”

Rogol says in the report that HGH is one of the few drugs in the United States that cannot be prescribed off label. Off label prescriptions allow a doctor to prescribe a drug for something other than its intended purpose (on label) if the doctor believes there is evidence it will help with another illness. According to Rogol, “[HGH] is one of the only drugs that I know of that is in that way – off label prescription – illegal, not just not a good idea. It’s illegal.”

Rogol confirmed in the report there are three conditions for the prescription of HGH in adults: “One is growth hormone deficiency, either carrying over from a child, or an adult who has had a serious condition of a pituitary tumor, surgery or radiation therapy in that area. The other two are short bowel syndrome, which is simply bowel cut out from a patient who’s had cancer or another bowel disease. The third is HIV wasting; so these are people who have HIV and not doing well. They are wasting away. Those are the only three that are appropriate indications for growth hormone in an adult patient.”

In Rogol’s opinion, there would “never” be reason to seek a prescription of growth hormone from an anti-aging clinic for any of those conditions. “The growth hormone deficiency would be an endocrinologist who takes care of adults,” he said. “The HIV wasting would be an infectious disease clinic, perhaps a gastroenterology clinic. And the short gut certainly be gastroenterology, gut surgery-type clinics. They would not be anti-aging clinics.”

Whether or not the accusations are true, this documentary has already started a firestorm in the sports community. Manning isn’t the only high-profile athlete detailed in the documentary; the piece is the result of a month’s long investigation into the “widespread nature of performance-enhancing drugs in global sports,” per the network. It implicates other high-profile North American athletes including Clay Matthews, Ryan Howard, James Harrison and Julius Peppers, among others.

So, if you thought the Manning drama was out of control before, buckle in.