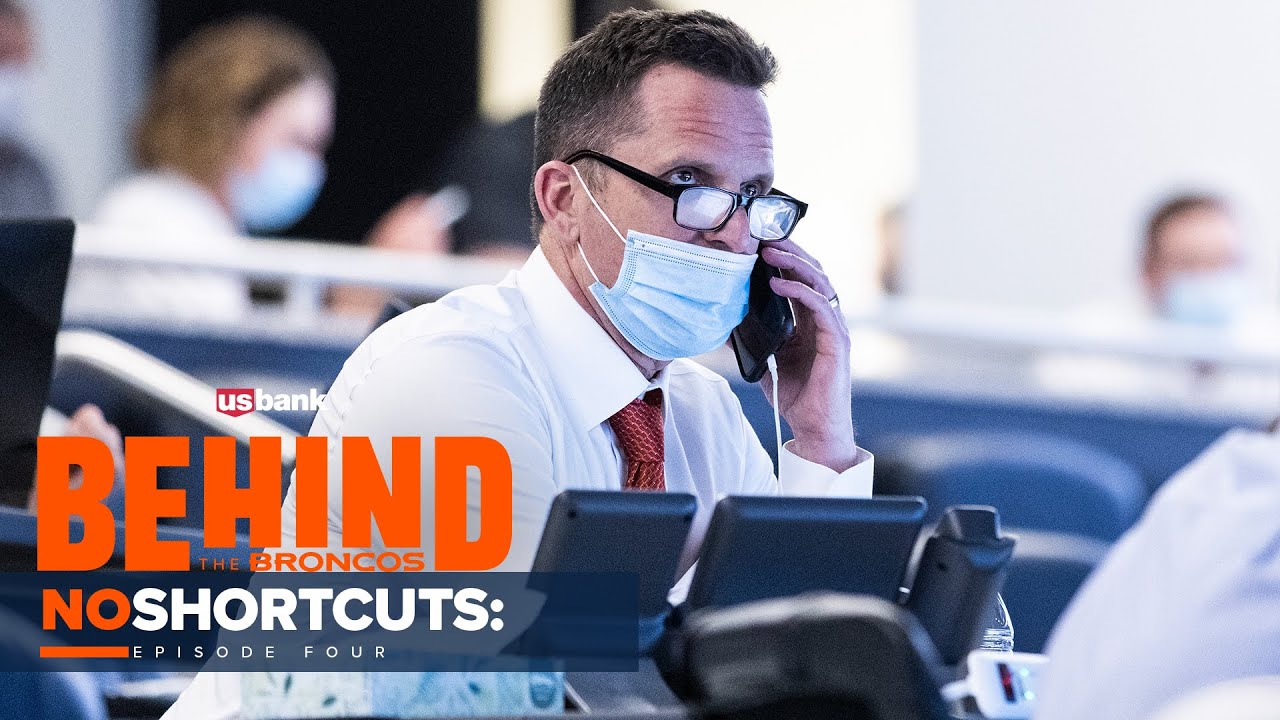 New General Manager George Paton has put his stamp on the 2021 Denver Broncos. Broncos Country got to look under the hood to see how this team is built.

The Denver Broncos media team created the Behind the Broncos: No Shortcuts series. Their work gave NFL fans get a chance to see George Paton and the Broncos’ front office work.

The object of this piece is to identify what aspects of the series are important for fans. Including, visible philosophical approach, tendencies, and other helpful tidbits from the lens of an organizational leadership perspective beginning with the first episode and through the fourth production.

Episode 1: Paton’s tenure with the Denver Broncos gets underway

The first episode in the series focuses on George Paton’s introduction to the position. What we see is Paton discussing what he likes and gives fans insight into why he chose the Broncos after turning down other teams through the years.

Needless to say, Paton believes the team has a lot of young talent. He referred to the Broncos’ young roster as a “sleeping giant.” He gushed over the wide receiving tandem of Jerry Jeudy and Courtland Sutton. Both earning high marks for several aspects of their games.

However, Paton seemed to gravitate to their attitudes. Both players show a fire and competitiveness he loves. This bleeds into the culture built by head coach Vic Fangio that resonated with Paton before taking the job.

He mentioned several times the team’s desire to play hard. Regardless of the score or the team’s record, the Broncos fought throughout the season. This speaks volumes on how the team

Paton not only studied this team before he took the job but after. He’s a scout by nature. He talks like a scout and thinks like a scout. His desire to “know what have” before they identify their needs shows his meticulous nature. His approach should give confidence to others that each decision he makes is thought-out and rational.

Players and staff alike will gravitate to a guy like this because he is measured and reasonable. Paton already seems like a stark contrast to his predecessor John Elway, whose desire to win outweighed making the sound decision at times.

In the second episode, fans really get insight into what Paton enjoys. His scouting roots are on full display. The desire to scout still sits with him even after becoming a general manager for the first time. “[Scouting] never left. I’ve been scouting since I got here. I am going to continue to scout… that’s what I am trained to do.”

His love for the nuances of football also provides a glimpse into how he will manage this team. As a football “lifer”, Paton enjoys just talking football. He finds the “beauty of the game” as a motivator that will serve him well if and when the team struggles.

One important note is Paton kept the entire staff intact when he arrived. The only departure was Elway’s right hand, Matt Russell. Instead of bringing over familiar faces, Paton worked with the existing department to prepare for free agency and the draft.

Paton repeatedly stated that the process has been positive, indicating that the current staff acclimated to him well. In doing so, the results would turn to a solid offseason for the Broncos.

Paton asked his scouts to ensure the player on the field matched the person off of it. Continuing the focus on leadership from the past regime, the scouting department searched for the right locker room fits.

Paton also ensured the scouts gave the coaches the information they needed to evaluate potential fits. That effort must have been well received for coaches who have other roles and responsibilities.

Paton makes two significant moves that change the culture of the organization. First resigning Shelby Harris. Interaction with Shelby shows Paton’s genuine connection to the players. Shelby talked about almost quitting the game and how much the moment between them means to him as a person.

Harris told Paton, “I don’t know if you realize what you are doing. It shows the young guys the organization appreciates the players.”

Next is Justin Simmons, whose new contract now makes him the NFL’s highest-paid safety. Simmons, like Harris, discusses how their interactions with Paton are a change from the previous regime. Both players express how they now feel appreciated.

Additionally, both players display high character players and intangibles that influence Paton to keep them.

In the end, Paton has stated he wants to build to the draft and maintain core players. He believes that long-term organizational success occurs through the draft. Keeping Harris and Simmons solidified his approach and showed the younger players that if they performed, they would be paid by the Broncos instead of another team.

Episode 3: Inside War Room before the draft

All good organizations have a clear message. Paton reiterated that throughout the 3rd episode of the series.

“You have to have a vision,” Paton said. “We ask the coaches, ‘What’s your vision for this player?’ If the player’s really talented and doesn’t fit the coach’s vision, then it’s not going to work. [You must have communication] with[Head Coach] Vic [Fangio], all the coaches, all the scouts and that’s what we’re going through now.”

Part of that vision is committing to the details. Paton is as thorough as they come and expects the same from his staff.

“When we get to this part of the process, we have a huge body of work — almost an entire book on each player,” the presently promoted Darren Mougey said. “We know the players so well, so it’s our chance just to kind of present the person and the player and kind of how we feel about him both on the team and his draft value.”

The in-depth scouting reports conducted by the Broncos went beyond players’ physical capabilities. Reiterating fit, the scouts discuss how the player would fit in the locker room, maturity levels, and overall toughness. Paton is again emphasizing that fit goes above just being an elite athlete. This is a way to successfully reinforce the team’s commitment to creating a strong leadership presence throughout the locker room.

As the team got closer to the draft, messages sounded the same from Paton and Fangio.

Paton had believed the draft is for the best players while addressing roster needs in free agency. The team had successfully addressed their roster holes right up until a draft week.

“You do want to draft the best player available, but [they] need does fit in there also a little bit more than it used to,” Fangio said. “…The higher you pick, the need factor is less prevalent, but still talked about. Picking at nine, you should be able to get a really good player and one that should be able to play immediately for you in some shape or form.”

Fans can get a sense that the team is confident they will get an impactful player if the Broncos stay at number 9 overall. However, the team does a great job not tipping their hand throughout the process up to the time their on the clock draft night.

Paton used this philosophy to execute a value-filled draft. Not only did the team get high-impact players they coveted like Pat Surtain II, but players who can contribute throughout the roster.

Leading up to the drafting of Surtain II, Paton made it clear to his staff to avoid creating any visible connection between the Broncos and the player. The staff kept up their end of the bargain and kept Denver’s desire to draft the uber-talented corner a secret.

Paton did not want anyone to know how they’d operate, and he executed it. His continued focus on the details continued to resonate with a staff he had only known for a few months.

What we did not appropriately measure is Paton’s love for the action (as he stated it). Paton loved the rush of being on the clock and having deals on the table. You can see the enjoyment of the job when Paton told an opposing GM that he had to hang up the phone in favor of another team that would offer him more.

Throughout the draft night, Paton asked for feedback from his staff. The people who put months of effort into the work had a legitimate say in who was drafted. Paton offered the floor for dissenting opinions no matter who was drafted. Before Surtain II was the pick, who they targeted all along, Paton offered one more chance for his staff to disagree.

In the end, Paton’s leadership style provides hope and a breath of fresh air. Although Elway was tremendous during his tenure his style contributed to the lack of players staying with the team.

Paton valued keeping core members of the team and did just that. His commitment to players on his own rost will pay dividends. Players can feel more confident in playing hurt or sacrificing stats because they’ll be valued more being an “in-house guy”.

Paton has a desire to get each detail covered. This trait is transferrable to how the team will evaluate talent moving forward. The team seemed to understand how free agency would pan out (grabbing Kyle Fuller minutes after his release) or pouncing on Javonte Williams with a trade-up.

Paton will always be a scout, so look for the team to have a better success rate hitting on players and maximizing draft value moving foward.

Broncos fans should feel confident in the competence Paton showed in his first offseason as an NFL general manager.