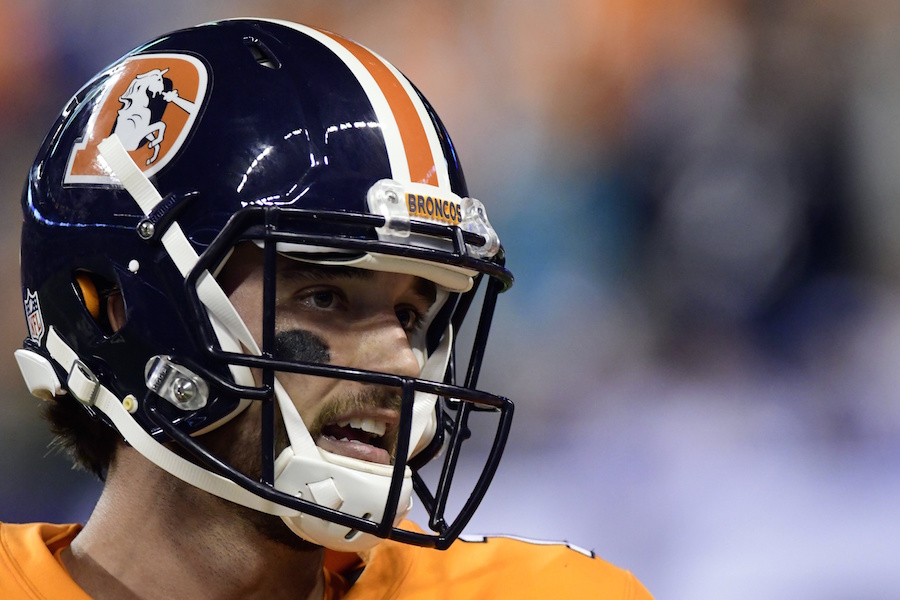 I wonder if John Elway and Brock Osweiler asked the same question I did as the clock ticked down to zero in Indianapolis.

It had to cross both of their minds at some point during or after the Broncos’ 25-13 win over the Colts, Denver’s fifth on the season. In Indy, the Broncos were excellent. Osweiler, who entered the game early in the second quarter, was arguably better. On the night, the Bronco turned Texan turned Brown turned Bronco went 12-for-17 en route to 194 passing yards, two touchdown passes, no interceptions and one rushing touchdown. He was the first Broncos substitute quarterback to throw for two touchdowns and run for one.

What if Osweiler had been handed the reins before Week 1?

The Skycam (a development that was less annoying than I’d anticipated, and actually revealed a decent amount about the Broncos) showed that Trevor Siemian (no matter what you think of him) doesn’t read defenses particularly well. He also doesn’t have much pocket sense, a trait that led to an injured left shoulder and a chance for Osweiler to shine. The Skycam showed that Osweiler (no matter what you think of him, either) is a veteran quarterback. He’s not Peyton Manning, Tom Brady or Philip Rivers, but he’s a bona fide NFL quarterback. He’s not great – although he was last night – but he just might be good enough.

Good enough to start from the beginning.

Good enough to loosen up a defense just enough to run the football effectively.

Good enough to let Von Miller rush the opposing quarterback — with a lead for crying out loud!

Allow me to complete the thought you’re about to have: Yes, prior to the Colts game, Osweiler was 0-3 as the Broncos starter. He wasn’t “good enough” to get wins in those games. That’s a fact.

But consider: At Philly. Against Brady and the Pats. Against the Bengals, who mysteriously beat the Broncos despite losing the time of possession battle, earning eight fewer first-downs than Denver and producing just 190 yards of total offense. The Broncos, conversely, lost in the areas of turnovers and penalty yardage. Maybe that one wasn’t entirely on Osweiler.

How good could Osweiler and the team around him have been if he’d been given all the first-team practice reps since August? Surely, any competent quarterback would be better off for that.

But there’s a more important question — one that precedes Thursday night, the 2017 season or training camp back in the heat of summer.

What if Osweiler had never left?

As good as Osweiler looked against the Colts — as good as he made the Broncos look — both Osweiler and Elway have to wonder. If they could only turn back time.

Then, Elway might have put his arm around Osweiler when the future-Hall-of-Famer Manning was given back the job of starting quarterback and the opportunity to go win a Super Bowl before riding off into the sunset. Elway might have explained that the setback was temporary, that Osweiler’s future with the Broncos was still very bright, that the job heading into the 2016 season was indisputably his. The Duke might have also reminded young Osweiler not to fret – that the post-Super Bowl payday was on its way. And that it would be big enough that suitors from around the league would have no shot at stealing him away.

Then, had Osweiler possessed a crystal ball, he might have viewed his demotion toward the end of the 2015 season differently. He might have supported more and pouted less. He might have had a bit more perspective on the moment at hand. And when it came time to consider his future, he might have concluded that staying in Denver — in an offense he knew, under a coach he respected and with weapons at his disposal — would have been a better long-term play than going to an organization that never gets over the hump, or playing for a coach who never did him any favors in a market that never had his back.

Had Osweiler stayed, would Elway have slid up the draft to take Paxton Lynch? Would he have used that pick to select an offensive lineman, a defensive tackle or an effective slot receiver or tight end?

Would the Broncos, fresh off a world championship, have failed to make the very next postseason with Osweiler at the helm? Would Gary Kubiak have ever left if he’d been back to the playoffs? Would the coach have left if he knew he had Osweiler returning as his starter, rather than Siemian or even Lynch, who potentially would have been shoved down his throat?

Had Kubiak stayed, wouldn’t Vance Joseph still be leading men in Miami rather than fumbling and bumbling in Denver?

Would the Broncos — with Kubiak as coach and Osweiler at QB and whoever else might have been willing to come to Denver by now — be sitting at, oh, say, right about 9-5 instead of 5-9 today?

Somewhere in this series of “what ifs” there’s a lesson to be learned.

What if Elway and Osweiler had valued people and patience more than pennies and pride?

Unfortunately, we can only guess… as we watch the Bronco-less postseason ahead.