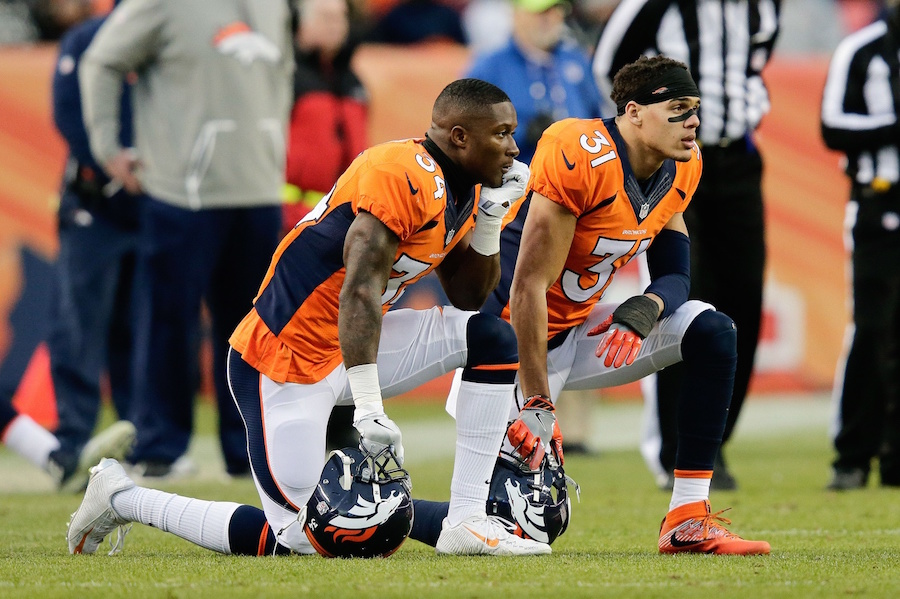 This Friday, rookie minicamp will officially be underway for the Denver Broncos – and while much of the talk will revolve around who is there, we can learn a lot from who isn’t there.

The clearest example of this comes in the defensive backfield. Despite rampant speculation surrounding Chris Harris Jr.’s future and both starting safeties, Justin Simmons and Will Parks, entering contract years, the Broncos only added one DB through the NFL Draft process. Denver signed former Stanford cornerback Alijah Holder as a UDFA.

Most draftniks had the Broncos selecting either a cornerback or safety early in the draft, yet John Elway chose to completely forego the position. So, what does this mean for the Broncos’ new secondary?

Well, for one – it likely means Harris will remain in a Broncos uniform this season. And secondly, the front office is betting on the development of Simmons and Parks in the secondary.

In Simmons and Parks, the Broncos are hoping they can recreate the success Vic Fangio had in Chicago with Adrian Amos and Eddie Jackson.

Much like Simmons and Parks, neither Amos or Jackson were drafted in the first two rounds. Jackson was drafted in the fourth rounds out of Alabama in 2017. After a solid but inconsistent rookie season, Jackson flourished in Fangio’s scheme in 2018, recording 51 tackles, eight forced turnovers and also scoring three touchdowns.

While Fangio is best known for his work with linebackers like Khalil Mack, Aldon Smith, Patrick Willis, NaVorro Bowman and Ray Lewis, his most impressive work is arguably in the secondary.

Last year’s highly-touted Bears defense earned the highest-coverage grade ever given to a team by PFF (95.9). Even with Kyle Fuller and Prince Amukamara as their two top cornerbacks, the 2018 Bears’ secondary historically outplayed more talented groups like the “Legion of Boom” and the “No Fly Zone”.

In 2018, Simmons and Parks earned grades of 60.9 and 74.0, respectively – meaning they’ll each have to step their game up significantly to match the production of Amos and Jackson in Chicago. With a new staff in town and their livelihood on the line, the young safeties can either elevate their play or potentially be playing elsewhere in 2020.