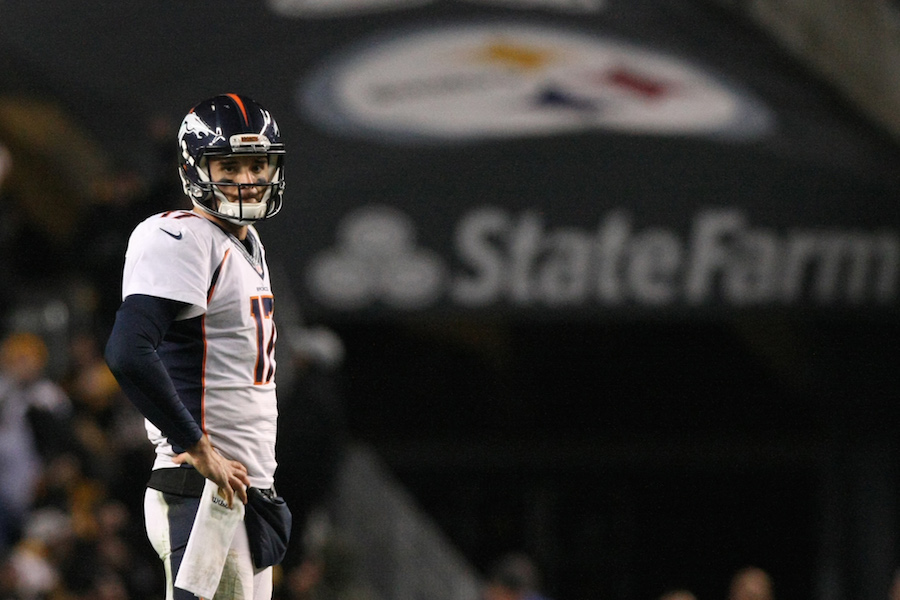 The Broncos defense is ready to make him cry Monday night.

The trash talk has commenced – and that’s not a bad thing.

“It’s Brock. We know Brock. He came from here. And we want to kill him. That’s just what we want to do,” linebacker Brandon Marshall told reporters with a smile on Monday.

No, of course Marshall doesn’t literally mean kill Osweiler, but killing his confidence and making Texans fans question even more why GM Rick Smith signed Oz to a mega-deal would be pretty sweet.

The Broncos defense made Osweiler a very rich man, carrying him to a 5-2 record in Peyton Manning’s absence before The Sheriff had to come back and save the day. Rather than return a little bit of the love, Osweiler chased the dollars while reportedly refusing to call teammates back during free agency.

I’m not sure that sat very well this bunch.

“It is what it is, he left us, it is what it is. We know he wants to win (and) we know we want to beat him bad,” cornerback Chris Harris Jr. said.

And don’t pretend like the Broncos weren’t willing to break the bank for Oz. Moments after he signed a deal with the Texans worth an average of $18M a year, it was reported Denver was offering a similar deal worth $16M a season.

The city, the fans and the ring ultimately meant nothing. In a span of about three months this offseason, Oz proved he was bitter.

First, it doesn’t appear he could possibly comprehend why he was being benched for Peyton Manning in Week 17 against San Diego. The GOAT was healthy, Osweiler wasn’t playing well and the No. 1 seed in the AFC was on the line.

What a difficult thing to wrap one’s mind around.

In the first two and a half quarters against the Chargers the Broncos turned the ball over five times under Osweiler’s guidance and were down 13-7. Manning provided a much needed spark, the Broncos put 20 points on the board in the final 20 minutes of the game and Denver secured homefield advantage throughout the AFC playoffs.

That worked out pretty well, as the Broncos beat Pittsburgh and New England at home, and then Carolina in Super Bowl 50, all while Osweiler watched from the bench.

Apparently this didn’t sit well with Oz, who always claimed to be a team player, but could seemingly never get over the benching.

A Super Bowl championship didn’t matter. He was gone.

Even if you’re in the “Osweiler was just competitive camp,” his next two decisions didn’t back that up.

On June 6 President Barack Obama hosted the Broncos at The White House to celebrate their championship. Everyone who was a part of the team’s success during the 2015 run was invited.

The beast Malik Jackson, who got huge dollars from Jacksonville, decided to show up.

Special teams staple David Bruton, who scored a nice payday from Washington, made the trip across D.C. from his new home to meet his former teammates.

Heck, even the retired Tyler Polumbus wasn’t going to miss one last hurrah with the boys.

Poor Brock, though, couldn’t be bothered to attend.

Osweiler told reporters in Houston the next day this is why he didn’t go:

“We only have 10 OTA practices, plus minicamp. It’s really not that many days. And whenever you’re learning a new system, every single one of those days is very precious. Every single rep, every single meeting.

“So, obviously, the Broncos being at the White House was a very special deal. I’m sure all of those guys had a good time and it was well-deserved. But this is where I needed to be. I have a lot to learn in this system.”

Though the practice “excuse” went over well in Houston.

“LOOK HOW DEDICATED HE IS!” exclaimed Texans fans in between sips of their Big Gulps. Too bad it was all a farce.

On June 12, six days after the visit to the capitol, the Broncos held their ring ceremony at Sports Authority Field at Mile High.

Once again everyone who was on the Super Bowl team was invited. Once again, Osweiler wanted nothing to do with his old team.

The Texans had absolutely nothing scheduled that day for players.

He didn’t care about missing a practice with his new teammates this time. Nope, he was too spiteful to show up.

Sorry you got benched for a surefire Hall of Famer.

Sorry the Broncos offered you $16M a year.

Sorry you weren’t classy enough to celebrate something you were, indeed, a part of.

Brock Osweiler proved this offseason his wallet is thicker than his fragile psyche. The Broncos should keep talking trash the next five days – there’s plenty of evidence it’s easy to get in Osweiler’s head.

If Monday night goes anything like his offseason, Osweiler will be quick to dip out of town and never want to come back.