After weeks of being ruled out and not practicing, tackle Ja’Wuan James is finally trending in the right direction. James was a limited participant all week and was labeled as questionable for the Denver Broncos Week 5 clash against the Los Angeles Chargers.

James is still unlikely to play with his knee injury, but seeing him out on the practice field this week is a sign of improvement. Elijah Wilkinson will get the start this week. Vic Fangio said earlier this week that “he did about what we hoped he would do.” He would go on to say that James is a “maybe” for next week against the Tennessee Titans.

Joining James as questionable this week is safety Kareem Jackson. Jackson missed last week with a hamstring injury and was a limited participant this week in practice. He has seen his workload increase all three days, however. Fangio is confident in his starting safety’s ability to play this week.

Wide receiver Emmanuel Sanders was a limited participant Wednesday and Friday this week, but full on Thursday. Defensive lineman Derek Wolfe was limited Wednesday and Thursday, but was a full participant today and will be in the lineup Sunday.

Linebacker Josey Jewell is also questionable but was not a participant in practice at all this week. Joe Jones, who was a full participant this week after being limited last week, will most likely start in his place. Cornerback Bryce Callahan is still out with a foot injury but hasn’t been placed on the IR yet.

For the Chargers, tight end Hunter Henry will be out again this week with a knee injury. Defensive end and pass rush specialist Melvin Ingram III is listed as questionable, but didn’t practice at all this week. Wide receivers Travis Benjamin and Mike Williams, linebacker Thomas Davis Sr. and tight end Virgil Green are all listed as questionable. Safety Nassir Adderly, running back Justin Jackson and kicker Michael Badgley are all doubtful to play this week.

The full injury report can be seen below. 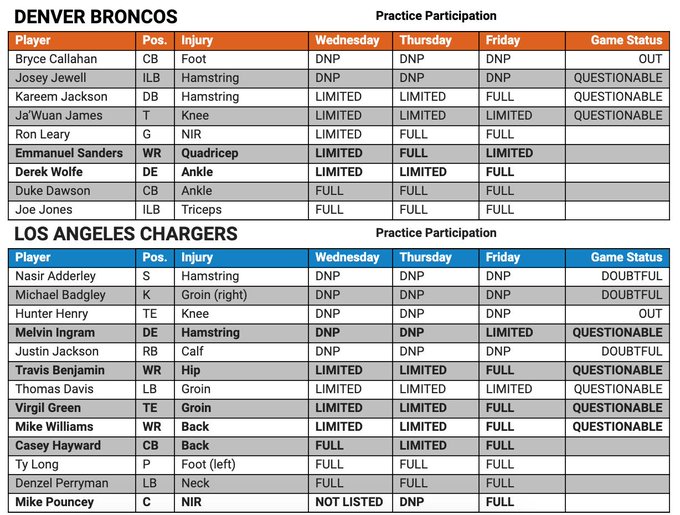