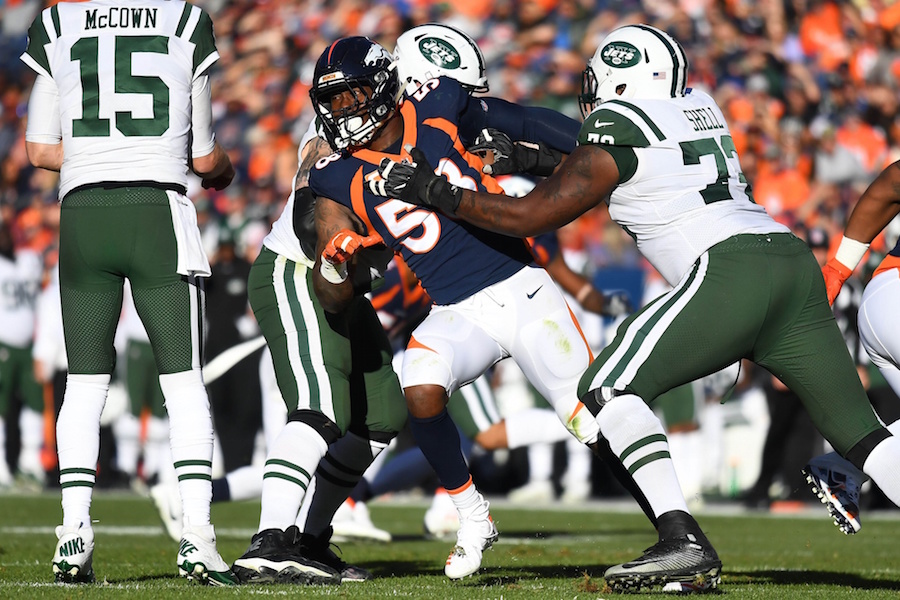 The Denver Broncos made a little history — and avoided some — with a 23-0 victory over the New York Jets on Sunday.

The win snapped an eight-game losing streak, just one shy of tying the franchise’s single-season record of nine consecutive losses set in 1967. It was the first time the Broncos held an opponent scoreless since 2005, coincidentally a home win over the Jets.

In the victory, Von Miller set himself apart from all other Broncos pass rushers and Demaryius Thomas made a case for himself as the second-best pass catcher in team history.

It was a complete team effort, however, as Denver dismantled New York for a much-needed victory to improve their record to 4-9 on the season. The Jets fell to 5-8.

After holding the Jets to just 40 yards of offense in the first half, Denver opened the second half with a solid defensive effort. New York picked up a quick first down, but a near-interception by Darian Stewart (which would have been his second on the day) forced a Lac Edwards punt to open the half.

The Broncos twice converted third downs on their first possession, and Trevor Siemian connected with four different receivers on the drive. C.J. Anderson nearly had a touchdown on a 13-yard catch and run down the far sideline, but he was whistled down at the half-yard line. Anderson was stopped short again on first and second downs before the Broncos turned it over to Andy Janovich. The fullback powered into the end zone for his first touchdown on the season, extending the Broncos’ lead to 20-0. The drive went 68 yards and used up 6:18 of clock time

McCown and the Jets went three-and-out, gaining just five yards, on their next possession. Siemian and the Broncos matched with an identical effort on their second drive of the half. It was just the second punt of the day for Denver at the time.

On the ensuing Jets possession, Von Miller made Broncos history becoming the first player in franchise history to record at least 10 sacks in six different seasons. With his 10th sack of the year, Miller has now recorded double-digit sacks in six of his seven seasons in the NFL. He ranks second, behind Simon Fletcher, on the Broncos’ all-time sacks list.

Denver forced McCown out of the game for the second time (he was dinged up on a scramble in the first half), when Shane Ray hit the quarterback as he threw on the very next play. Bryce Petty led the Jets to a pair of first downs, but could not keep the momentum going. Trailing by three scores, head coach Todd Bowles elected to go for it on fourth-and-three from the Denver 41. Petty missed his target and Denver took over with a short field.

More Broncos history was made on the next drive, when Siemian connected with Thomas on a 25-yard slant on the first play. The catch moved Thomas past Hall of Fame tight end Shannon Sharpe for second place all time on the Broncos’ receiving yards leaderboard. Thomas passed Sharpe for second in touchdown receptions for the Broncos with a first-quarter grab in the end zone.

Siemian and the offense wouldn’t match those 25 yards on the remainder of the drive, however, earning just 12 more on six plays before Brandon McManus connected on his third field goal of the game to cap the scoring and extend Denver’s lead to 23-0.

The two sides traded three-and-outs over the next seven total possessions before Siemian and the Broncos took a knee to end it.

The Broncos will have a short turnaround for their next game, as they travel to Indianapolis on Thursday night to face the 3-10 Colts.