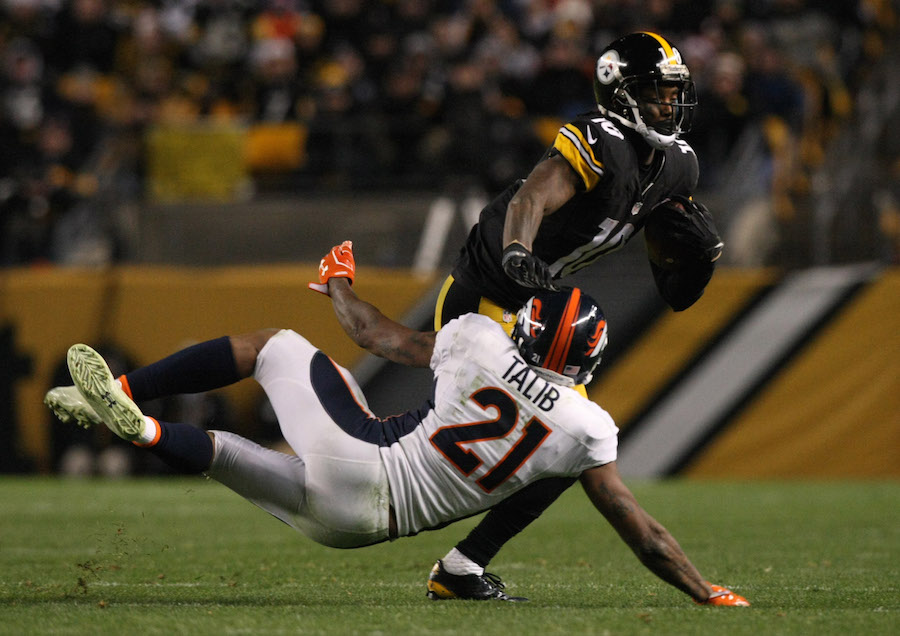 Entering Sunday’s matchup with the Pittsburgh Steelers everyone was wondering how the Denver Broncos’ vaunted defense would match up with Big Ben Roethlisberger and his speedy cohorts. For a half, the script was flipped. The Broncos, aided in large part by Emmanuel Sanders in his return to Pittsburgh, came out firing but the game would feature two separate runs of scoring, with one team finishing and one fizzling.

The Broncos first half was encouraging, surprising and a possible glimpse into the future of the team but the second half mirrored one from just a week ago. After an early, but brief seven-point deficit, Brock Osweiler lead the Broncos to a 27-13 halftime lead with stellar play on third downs and some magnificent plays. But, alas it would not last. The Steelers answered with a flurry of passes and 24 unanswered points that proved too much for the Broncos.

When the game turned into a two-team shootout, the Broncos could not finish the job. With 4:20 left in the game Osweiler did his best Roethlisberger impression and scrambled out of a sure sack and looked downfield. Unfortunately for the Broncos, he threw the ball to the wrong team. Ryan Shazier intercepted the pass and Roethlisberger almost immediately made them pay. Just 56 seconds later the Steelers took their second lead of the game on a seam route by Antonio Brown and it was enough for the 34-27 win.

The Broncos had two more chances to come out on top, but their skid in the second half was too much to overcome. Brandon Marshall’s interception came with 2:01 time left and gave them the ball on the Pittsburgh 41 yard line. The drive and the game ended much like the Broncos entire second half transpired. A pass hit the ground on fourth-and-long, making it the ninth straight drive since halftime that ended in a punt, interception or turnover on downs.

The Steelers’ win moved them to 9-5 and back into the playoff race. The Broncos top-ranked overall defense and top-ranked pass defense could not keep up with the Steelers’ fire power, Antonio Brown in particular, who finished the game with 16 receptions, 189 receiving yards and two touchdowns. Roethlisberger completed 40 of 55 passes for 380 (gross) yards, the only 300-yard passer against the Broncos all season, adding three touchdowns and two interceptions.

It was simply two separate halves for the Broncos. Osweiler and the offense went into the half hot. He had completed 14 of 18 passes for 214 yards and four touchdowns on five drives. More importantly he was 8-of-8 on third downs. Their offense looked fluid and able to beat the 31st-ranked pass defense of the Steelers at will. Sanders had a touchdown and 139 receiving at half and Demaryius Thomas caught the other two touchdowns, but like last week, things changed drastically in the second half.

Osweiler, briefly sent to the locker room early at the half with a left shoulder injury, came back to only throw for 82 more yards in the contest on 7-of-26 second-half throws. Last week versus the Oakland the Raiders the Broncos offense failed to record one first down in the second half. Sunday afternoon in Pittsburgh was nearly as bad. After the great third down conversions that amassed 27 first half points, the Broncos converted only one of their last nine.

That type of inept play gave Big Ben several opportunities to justify the many claims that his offense is the hottest in the NFL. They did just that. Brown was unstoppable. Even when blanketed by Chris Harris Jr., he hauled in the football. His teammates were great as well. Martavius Bryant caught 10 passes for 87 yards and Markus Wheaton caught six balls for 62 yards and a touchdown over Bradley Roby that tied the score at 27 with 12:34 left in the game.

The Broncos out-gained the Steelers 385 yards to 377, they sacked Roethlisberger three times to only two on Osweiler, they went 3-of-3 in the red zone but it was nearly all in the first half.

The Steelers played four quarters of football, scoring in each quarter and getting two touchdowns off of the Broncos’ two turnovers. The Broncos did score off of Josh Bush’s interception but could not score and tie the game late when Marshall caught an errant Roethlisberger pass.

Several issues familiar issues accompanied the Broncos second had offensive struggles. They were penalized 12 times for 127 yards. A questionable 26-yard pass interference call on Harris covering Brown set up the wide receiver’s first touchdown of the game, which narrowed the Broncos’ lead to 27-20 with 7:26 remaining in the third quarter.

At the end of the third quarter Jordan Norwood let Steelers punter Jordan Berry’s punt bounce around until defenders slowed down and he picked up the ball and returned it 71 yards for a touchdown. However, before Norwood even touched the ball, Broncos offensive players began to walk onto the field. The illegal substitution call negated the huge play and the next drive resulted in another Broncos punt. (Pittsburgh was later shown to have touched the ball illegally, which also would have negated the play.)

The Steelers were flagged nine times as well, but for only 63 yards.

Then the ugly drops seen last week and nearly each week, caught up with the Broncos. Demaryius Thomas dropped two balls to total 10 on the season. Earlier, Vernon Davis, after a holding call on Max Garcia, let a perfectly placed Osweiler third-down throw over the middle drop to the ground instead of catching it and taking an approaching big hit.

Neither team’s running game was a factor. Ronnie Hillman started off the game with a costly fumble on the Broncos opening drive that resulted in a Steelers DeAngelo Williams rushing touchdown. Hillman ran the ball 14 times for 48 yards and Williams totaled only 26 yards on 14 carries against the Broncos front.

The Broncos loss puts them at 10-4, just one game in front of the Kansas City Chiefs in the AFC West and keeps a 2015 postseason guarantee another win away. The inexplicable ups and downs of the offense coupled with the suddenly human defense is just what the Broncos have been hoping to avoid as December continues. Head coach Gary Kubiak has preached about “peaking at the right time”. The Broncos have gone 3-4 after starting 7-0 and are no closer to an identity than they were in August. The Broncos game Sunday matched their season thus far. Ups in the first half were followed by downs. The high everyone wants to leave on is eluding the Broncos and worse, it is becoming a habit.