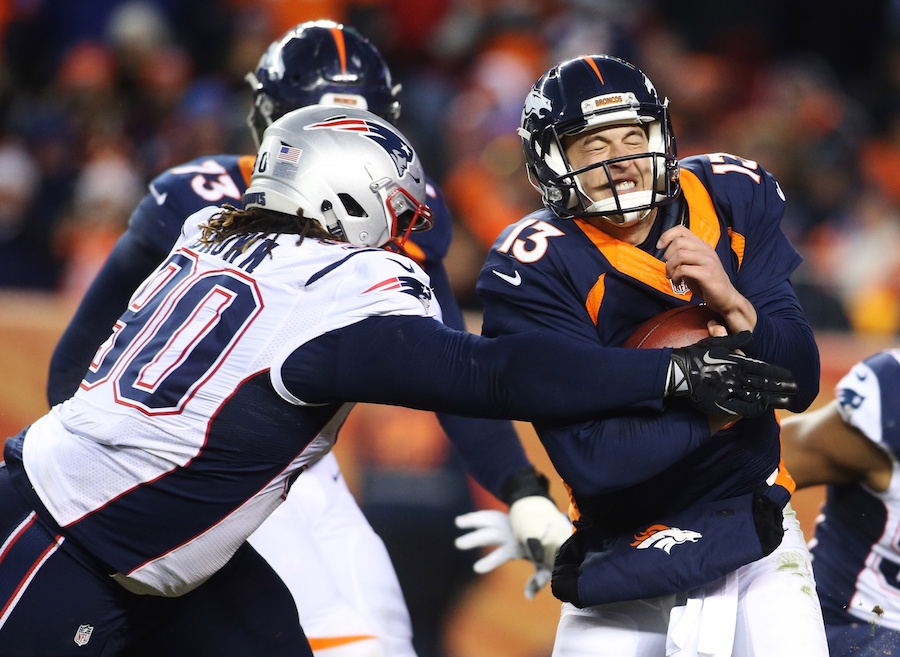 There’s only so much one defense can do.

On Sunday, the Broncos defense did just about everything in their power to give Denver a chance against the New England Patriots, but at some point, the offense needs to actually put some points on the board, especially when you manage to hold the league’s No. 4 offense to just 313 yards and 16 points.

There was some hope early in the game. Behind Justin Forsett, the run game actually looked to have a pulse for the first time since C.J. Anderson was placed on IR.

So nice to see Forsett the guy and a main part of today's offense.

#Broncos OL looks a lot better with Forsett at RB…….

Forsett runs with so much more confidence than Booker. Thrilled the #Broncos were able to acquire him

It went downhill from there, though. Despite the productive start, the Broncos only finished with 58 yards on 17 attempts.

The same could be said for Trevor Siemian, who had the Broncos moving up and down the field early. After a quick punt on their first drive, Denver had two straight extended drives. The first ended in a field goal, knotting the game up at three.

The second, though, did not end so well.

Siemian completed five of six passes for 65 yards, including a couple into tight windows, to move the Broncos down inside the red zone. But on the first play of the second quarter, Siemian dropped back and unloaded a pass to Emmanuel Sanders that was promptly picked off by Logan Ryan and returned 46 yards into Denver territory.

AAAAAAAND there go all the good feelings … Ugh

That was just a terrible throw. #Siemian #Broncos

Just when I wanted to like Siemian. I really did.

The Patriots responded with a 1-yard LeGarrette Blount touchdown, which extended New England’s lead to 10-3.

14 point swing belongs to Trevor. That's on him. Poor.

From that point on, it was game, set and match.

Not only did the Broncos fail to score again, but they went three-and-out on five of their next six drives — the only other being an 11-play, 39-yard drive ending in a punt.

What’s worse is that the defense gave Siemian and Co. every opportunity to get back into the game. The Broncos only allowed the Patriots to score six-second half points and forced two three-and-outs of their own.

Whether it was Siemian or someone else, Denver’s offense simply couldn’t make a play, as A.J. Derby and Demaryius Thomas combined for three crippling third-down drops.

All of the above, probably. Whoever is at fault, Broncos Country has reached their breaking point.

The Broncos' offense is putrid.

I'm so over Gary Kubiak and Rick Dennison. Take your rings and go home. Trash offense.

Suggesting #Broncos Lynch should replace Siemian is like suggesting a good ingredient should go into a bad pot of gumbo.. Dump the gumbo!

Coaching staff that refuses to stick with the run, an offensive line that doesn't pass protect well & a QB that scares no one. #Broncos

You hold the Patriots to 16 points, you need to win …

Find me another QB who puts up 13 points in two games and gets no blame. Of course there are other problems. But the free pass is laughable!

At 8-6, the Broncos are now on the outside of the playoffs looking in, with games against the Chiefs and Raiders remaining.

If they win out, there may still be hope, but that hope is dwindling fast.

With the way this offense has played over the last two weeks (13 points total), it’s hard to imagine them beating anybody with pulse.