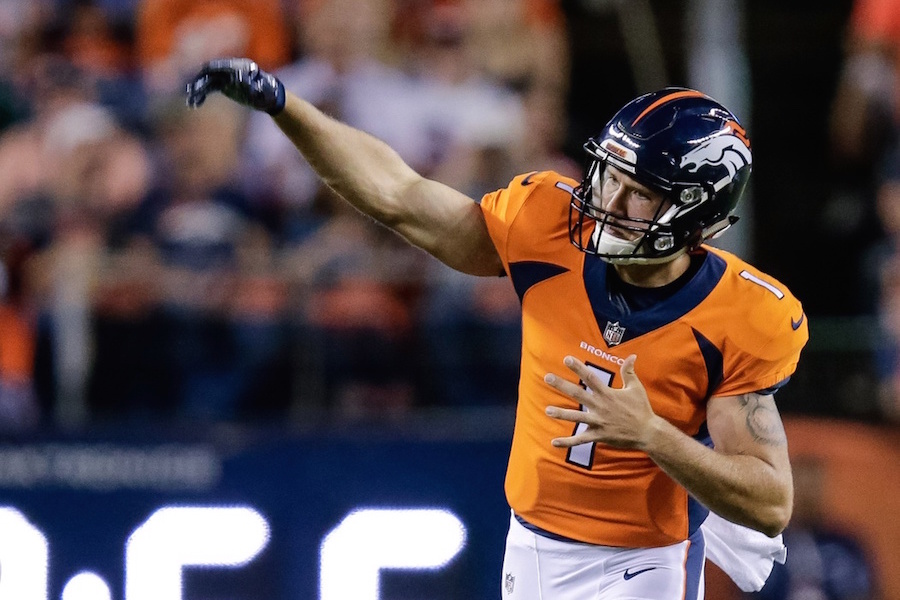 Preseason records don’t count, and the stats don’t matter… but it doesn’t mean that the Broncos can’t enjoy them.

After crushing the Arizona Cardinals 30-2 on a warm, Colorado night, the Broncos wrapped up an unbeaten postseason; their first since 2005, and only their fourth in team history. In that 2005 season, the team finished 13-3, a record that no one expects the 2017 Broncos to get close to — but for a team struggling for relevance in the post-Peyton Manning era, they’ll take any good omen they can find.

Third-string quarterback and training camp darling Kyle Sloter was solid once again, completing 15-of-23 passes for 220 yards and a touchdown in the preseason finale. In the four games, the undrafted rookie from Northern Colorado completed 31-of-43 passes for 413 yards, three touchdowns, no interceptions, and a sterling 125.4 quarterback rating.

While fans may be clamoring for Sloter to make the team at the very least, first-year head coach Vance Joseph sounded less enthusiastic. “Our depth chart has not changed when it comes to the quarterback position,” said Joseph. ” He’s played very well. He had a slow start [Friday] with the safety and taking a sack backed up, but he came out of it and had three 80-yard scoring drives. He’s impressive. He’s a young, poised quarterback. He’s very
intelligent. I’ve been impressed with Kyle.”

While Sloter may be ticketed for the practice squad — rookie safety Jamal Carter has an easier path to the 53-man roster. Carter, who logged seven tackles on Friday, looks primed to break with the team after news that safety T.J. Ward will likely be traded or released by the weekend — news that wasn’t well-received in the locker room after the game.

“I don’t know. Like I said, I hope it’s fake news. I hope it’s not real. I’m just taking it one day at a time,” all-world linebacker Von Miller quipped. “What hasn’t he done?,” safety Justin Simmons — the man who would take Ward’s job — asked afterwards. “When I heard about this whole trade thing coming out, it’s crazy to kind of hear about it. I mean, you’re talking about messing with the chemistry of the defense and the chemistry he has with so many guys in this locker room… it’s crazy.”

Rosters must be pared from 90 to 53 on Saturday; an unprecedented bloodletting driven by this year’s NFL rule change, and for the Broncos, tough choices remain to made at multiple positions. Running backs Stevan Ridley (11 carries for 51 yards and a touchdown) and Juwan Thompson (nine carries for 56 yards) both showed they belong on an NFL roster, but it’s possible that neither player will remain a Bronco, nevertheless.

But for the Broncos’ Joseph, those decisions can wait one more day, and for one more night, the orange-and-blue-bloods can enjoy the tease of preseason success. “Winning is winning,” Joseph said. It doesn’t count, but for our football team to play well four straight weeks and win the football game; that counts. Obviously, next week is the real deal. That should be exciting. I’m looking forward to that.”