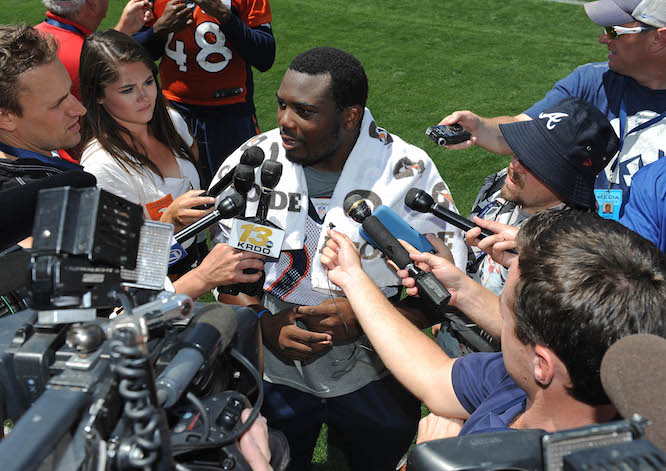 Kubiak says they got a little knicked up today but nothing that should keep anybody off the field on Thursday pic.twitter.com/cOTNPGv6th

Media always gets excited about the final cuts, but reality is the The final guys Who make the cut rarely play. Why are we so excited?

Red zone philosophy. We want to run the ball. Every positive attitude lay is a positive and be ready for all or nothing

Von Miller owned Ryan Harris in 1-on-1. Would have been a thunderous sack in a game. Miller celebrates by running 35 yards to the building.

Joe Don Duncan getting some chances to be a lead blocker for C.J. Anderson today.

Barth was putting kickoffs 8 yards deep in the end zone. If that keeps up McManus can kiss his job goodbye.

Kubiak "when the team is dragging you want your QBs to make plays. All three QBs did that at the end of practice." #broncos

Craziest thing seen yet at camp. One on one pass rush Von rushes underneath Harris. Serious took and angle that went under Harris

Second consecutive day with more than 4,500 fans watching practice as a training-camp best 4,787 fans saw the Broncos this morning.