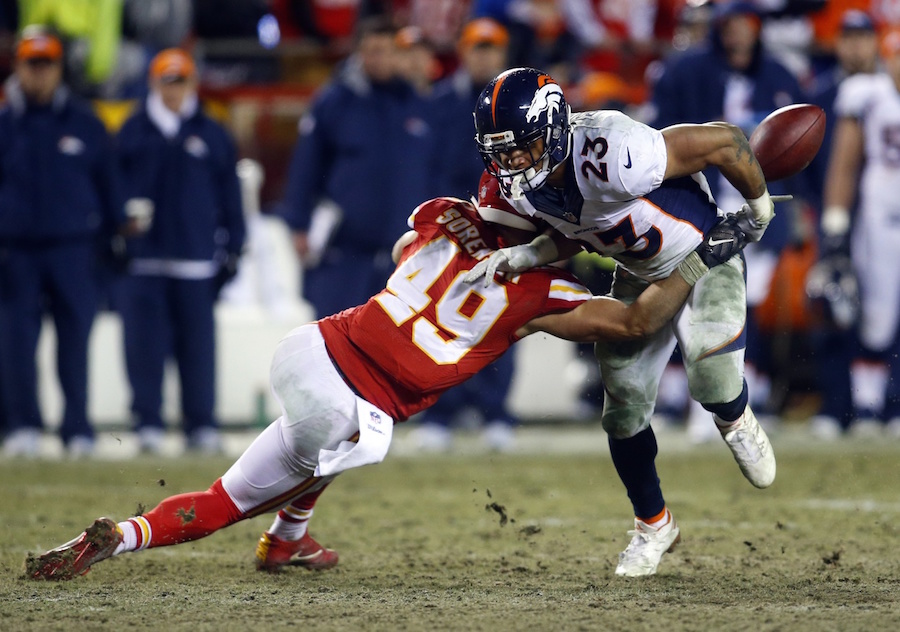 The Denver Broncos kicked off training camp 2017 this week, beginning the journey to reclaiming the AFC West and getting back into the playoffs.

Of course, one of the biggest obstacles in doing so is the reigning AFC West champion Kansas City Chiefs.

For the first time since 2000, the Chiefs swept the Broncos in 2016, defeating the team in both head-to-head divisional showdowns.

As with most division games, the results of both Chiefs-Broncos games had major implications for both teams. The Chiefs would end up winning the division, while the Broncos missed the playoffs for the first time since 2010.

One of the key components for the Broncos going into their 2017 showdowns with Kansas City will be if they can successfully run the ball against the Chiefs defense.

Statistically, the Broncos did not fare well against the Chiefs last season running the ball. In their 30-27 overtime home loss to the Chiefs on Monday Night Football, their leading rusher was Devontae Booker, who managed 79 yards on 24 carries.

Unable to control the clock and slow down the pace of the game, the Broncos ended up relying on the arm of Trevor Siemian, who had a terrific game with 368 yards passing coupled with three touchdowns and no interceptions.

Unfortunately, in the Broncos’ second game against the Chiefs, Siemian was unable to replicate his success, compiling only 143 yards and an interception.

The running game also struggled to find momentum, as the Broncos totaled 63 yards as a team.

Looking ahead to 2017, the Broncos will need to establish an early and effective running game if they want to overthrow the Chiefs as the AFC West champions.

It was clear that the Broncos sorely missed C.J. Anderson, who missed both games due to injury. Anderson has been the Broncos’ primary running back in recent years, but has missed time due to injury. Heading into camp, Anderson is confident in where he stands:

“I felt good. It feels good to be back. I’ll feel even better on Sunday when we’re putting on pads, I don’t look good in this hoodie. I can’t wait until Sunday to be honest with you. I haven’t put on pads since October. I just feel good to be back. I get the energy from the fans and I’m back out here with the guys. I haven’t practiced in a very long time, so it just felt good to get out here and run around.”

Though he played admirably and showed flashes of potential, Booker will need to focus on staying healthy if he is to play a role in the Broncos running game, specifically against the Chiefs. Booker recently injured his wrist and could be out as long as two months.

During the 2017 offseason, the Broncos signed former Chiefs running back Jamaal Charles to strengthen the run game as whole and provide needed depth behind Booker and Anderson. Coming off back-to-back knee injuries, the Broncos are hoping that Charles can regain his pre-injury form and put up big numbers against the his former team.

One of the biggest reasons the Broncos will need all three running backs to excel in their games against the Chiefs is due to the rebuilding offensive line. With pass rushers like Justin Houston, Tampa Hali and Dee Ford, the Chiefs have the potential to get to the quarterback quickly if the Broncos are forced to pass the ball early.

An effective running game will be a key to mitigating this, keeping the Chiefs defense on the field for longer periods of time and allowing the Broncos to control the clock and have advantage in the overall time of possession.

While the Broncos continue to ready themselves for the upcoming season in training camp, an emphasis should be put on the running game, especially in preparation for the AFC West rival Chiefs.

The better results the Broncos can produce in their rushing offense could lead to key victories that could lead them back into the hunt for a Super Bowl.