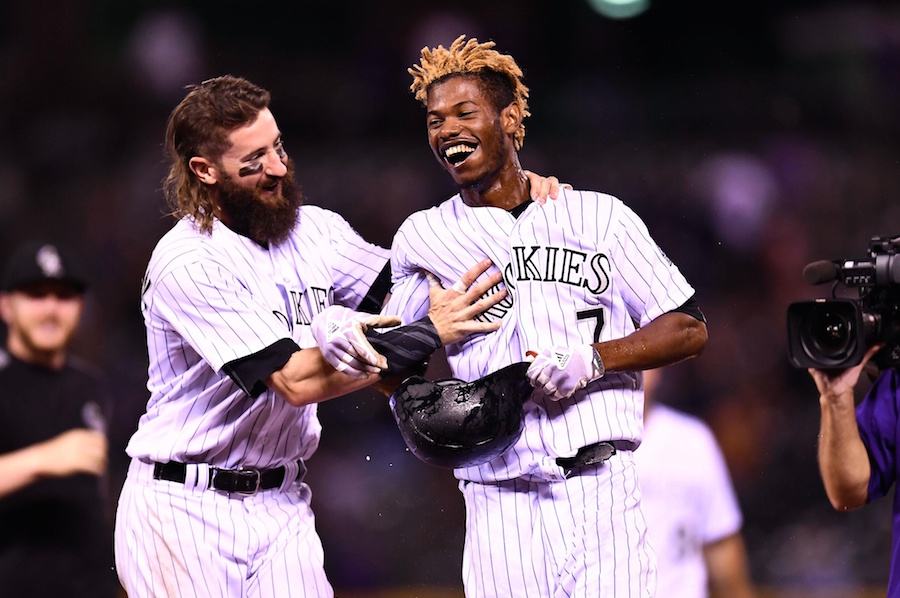 Raimel Tapia‘s coming out party for the Colorado Rockies didn’t happen Wednesday in a 4-for-4 performance against the Pittsburgh Pirates to help salvage the final game of a series. Even though Tapia scored three of Colorado’s five runs in the crucial road victory that ended a three-game losing streak, his big moment was still waiting.

It happened in front of 40,747 anxious fans at Coors Field one night later.

Tapia delivered the knockout blow against the San Francisco Giants in the bottom of the ninth inning on Thursday with a seeing-eye single to redeem the Rockies after they blew a 9-1 lead heading into the seventh inning.

Rockies fans who haven’t been following Tapia during his time in Albuquerque might have been fooled by the 0-for-16 start he was off to in his few call-up to the big-league club this season, but make no mistake. Tapia can swing the bat consistently.

“I think his batting average, his on-base percentage, his at-bats in Triple-A – and what I saw in Spring Training, what player development has told me about Tapia – he can hit,” Black said.

“So I thought that over time,” Black continued, “the Triple-A numbers would translate into big-league games. We’ve seen that the last couple days.”

Tapia’s opportunity over the past two days has come in relief of the slumping Carlos Gonzalez, who remains hitless since June 6. But it was a key pinch-hit walk by Gonzalez on Thursday that gave Tapia the opportunity to be the hero.

After Mark Reynolds led off the bottom of the ninth with a single, Gonzalez drew a walk to put Reynolds on second base and bring Tapia to the plate. The rookie delivered Colorado’s first walk-off win of the 2017 season.

“He’s a unique player,” Black said about the 6-foot-2, 160-pound 23 year-old outfielder. “From his [bleached blond] hair, to his [batting] stance, to how he runs. The thing that I like about him is that he likes to play.