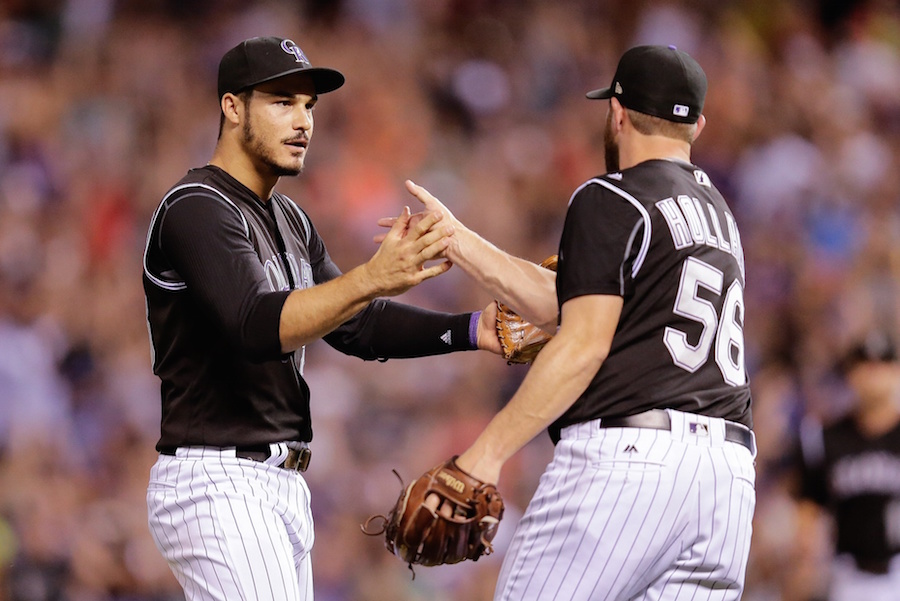 Nolan Arenado played the hero once again in the Rockies’ 4-3 comeback victory in the series opener against the Arizona Diamondbacks. Arenado may be bursting with enthusiasm when the final out is recorded, but it’s his level head that helps him deliver in in the clutch.

The All-Star third baseman ripped a triple to right field in the bottom of the eighth inning to stay hot at the plate and put the Rockies on top for good. After the game, Bud Black was very complimentary of the team’s mentality as a whole, but especially with regards to Arenado and pitcher German Marquez.

“Nolan’s been swinging the bat well. We’ve talked about that. So when a guy is swinging the bat well it doesn’t matter if it’s early in the game, middle of the game, or late in the game. Players usually carry that feeling throughout the game or throughout certain stretches, and Nolan’s in a good spot right now,” Black said. “We keep our poise, keep our focus, keep our intensity throughout the game. No matter what type of game it is, whether — like the last couple games we’ve fallen behind — we bounce back. You’ve got to keep a level head in this to come back. It’s not about trying harder, you have to remain focused and on point.”

Black was proud of the youngster, Marquez, for keeping the team close with a strong outing and working through some adversity.

“[German Marquez] came out firing and his stuff was good early. Especially velocity and he showed a couple of good breaking balls. He was feeling it early, and then as the game wore on we saw some misses with location, saw some misses with pitches, but we made some good plays for him,” Black explained. “They hit some balls on the nose. [Zack] Greinke’s line drive, the line drive to short[stop], [David] Peralta hit a hard hit ball that CarGo made a nice play on. He hit [Paul] Goldschmidt with a change[up] but all-in-all you look at it, he gave up one run and went six innings. Not quite as efficient as you want, but this guy is a 22 year-old pitcher.”

The Rockies, now sitting atop the NL West by a half of a game over the LA Dodgers, will continue their series against the Diamondbacks Wednesday night at home. They will look to extend their division lead and win their seventh straight game as Jeff Hoffman (4-0, 2.25 ERA) faces off against Taijuan Walker (5-3, 3.32).