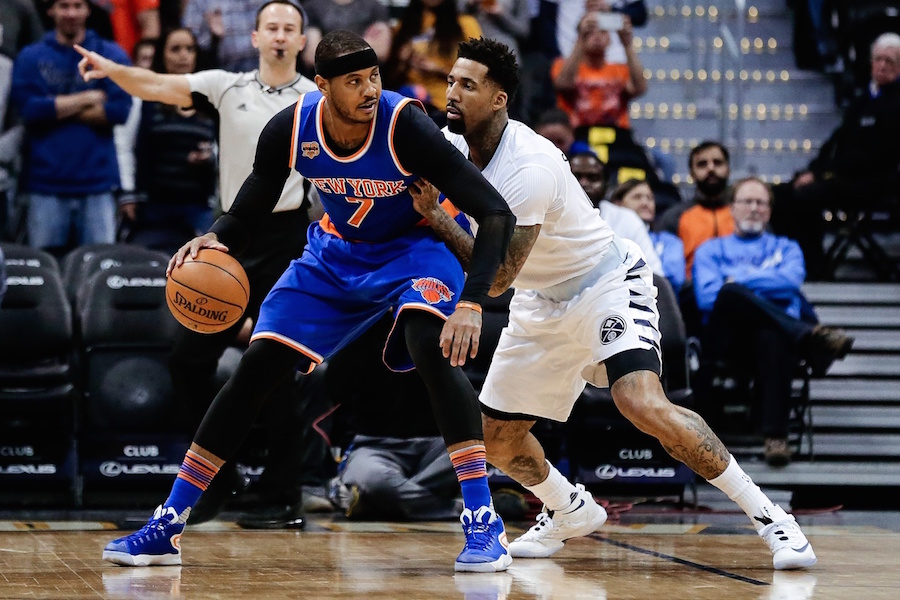 The story was supposed to be Carmelo Anthony making a return to Pepsi Center. It turned into the Denver Nuggets having one of their most balanced games of the season.

Seven players for the Nuggets scored in double digits, spoiling the homecoming for Carmelo Anthony who still has yet to win a game in the Mile High City since being traded. He is now 0-4.

Carmelo spent his first six seasons with the Nuggets, helping them reach the playoffs in each of those seasons. The small forward endeared himself to the fans at Pepsi Center with his silky smooth jump shot and his scoring abilities.

Those scoring abilities were certainly on display Saturday night when the Denver Nuggets beat the New York Knicks 127-114.

Melo received a mixed ovation — some boos, some cheers — from a larger crowd than the Nuggets have received as of late.

Anthony was a game-time decision heading into the night, as he sat the game prior with a shoulder injury.

The forward did all that he could, scoring 29 points on an efficient 10-14 shooting from the field and hitting both of his three-point attempts. But his valiant effort would come up short, as the Nuggets never trailed throughout the game, their second consecutive game doing so.

“I think they’re going in the right direction,” Anthony said after the game. “With all of the changes that they’ve made, the way that they’ve kind of sustained who they want to be and what they want to be. I think that everyone is buying into that kind of the program.”

With the loss, the Knicks are now on a three-game losing streak and look for some balance, maybe a change in the starting lineup is needed. It was what kickstarted the Nuggets to a winning streak of their own.

“It’s a difficult situation and hard to tell,” Knicks head coach Jeff Hornacek said. “Derrick Rose hasn’t been out here playing but we definitely need a change with how we’ve been playing.”

Rose has missed his second consecutive game since getting injured Tuesday against the Phoenix Suns, but the one time MVP had some positive things to say about the Nuggets as well.

“They’re playing well together,” Rose said. “They believe in each other, and if you look at the stats, the stats are really good stats; it lets you know they spread the ball.”

The Nuggets started out the season a bit rough, but 27 games in, they seem to have figured it out.

They find themselves tied with the Blazers in the loss column for the eighth seed and play a struggling Dallas Mavericks team that they felt they should’ve beat not even a week ago.

“Next, we have Dallas coming in,” head coach Michael Malone said. “We owe them.”