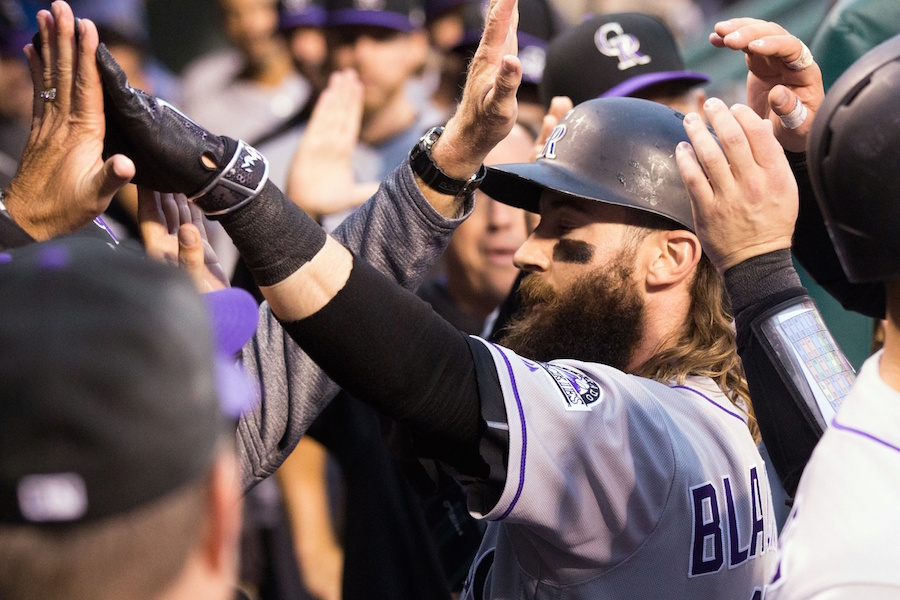 The traveling freight train that is the Colorado Rockies just keeps on rolling. On Wednesday night it again barreled through the Philadelphia Phillies to the tune of a 7-2 victory that ensured a series win and at least a seven-win road trip on Colorado’s longest (10 games) of the season. The bats came alive for the third night in a row and Tyler Chatwood looked like the Tyler Chatwood fans came to love in 2016 in another dominant road victory for the Rockies.

Every Rockies starter recorded a base hit, including Chatwood, and seven of Colorado’s eight position players scored a run in yet another balanced offensive effort by Bud Black‘s squad. Carlos Gonzalez stayed hot, going 3-for-5 with three RBIs – all via a three-run home run in the third inning. Trevor Story went 1-for-2 with a pair of walks in his return to the lineup after missing nearly two weeks with a left shoulder strain. Charlie Blackmon had a hit, a run and two RBIs to extend his team lead in that category. Colorado did all its damage in a seven-run third, all against Jeremy Hellickson who took his second loss on the year.

On the mound, Chatwood was outstanding. He looked like the same Tyler Chatwood that last year compiled a NL-best 1.69 ERA among starters on the road. Chatwood allowed just one hit over seven innings pitched in Philadelphia, striking out eight and walking four. Mike Dunn lost the shutout in the eighth inning, giving up two runs on two hits and a walk while retiring just one batter. Adam Ottavino wriggled out of the jam. Jake McGee struck out two in a perfect ninth inning to close things out.

Colorado improves on its NL-best record, now at 31-17 and an impressive 18-7 on the road. The Rockies will look for the sweep on Friday in a day game with Tyler Anderson on the mound. Anderson has showed slow but steady improvement over his last few starts, but still sits at 3-4 with a 6.00 ERA on the season. His opponent, Vince Velasquez, is off to a similar start at 2-4 and 5.98. First pitch is 11:05 a.m. MDT at Citizens Bank Park.