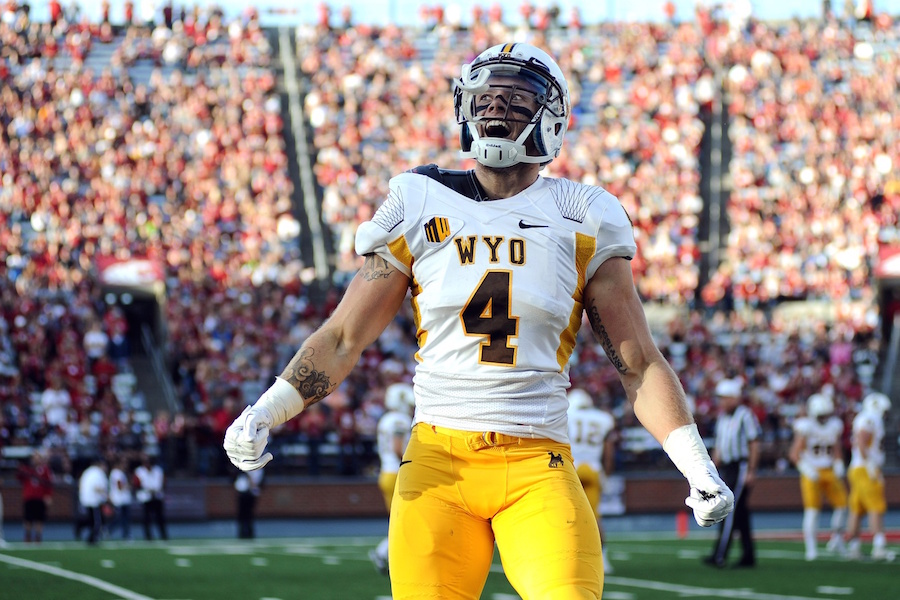 Gentry even caught a couple "un-catchable" balls. Earned a round of applause for this one. But Wyo fans know this isn't out of the ordinary pic.twitter.com/B2xfI6ZGK0

Gentry also impressed with his bench press performance, putting up 19 reps of 225 pounds. To put that number into perspective, current NFL standout receiver and physical specimen Julio Jones only had 17 reps. Gentry also posted a 38-inch vertical jump, showing he has the ability to compete for jump balls.

Wyoming only had two players invited to the NFL Combine, and Gentry wasn’t one of them. Despite this, his pro day numbers would have impressed at the combine as well. His 19 reps on the bench press would have tied him for second-best among all wide receivers. Also, his 38-inch vertical would have been the fourth-highest for all wideouts. Although his broad jump wouldn’t have placed him in the top five at the combine, it still would have put him in the top 15.

Last season, Gentry was a 2016 All-Mountain West second-team offensive selection after compiling 72 receptions for 1,326 yards for 14 touchdowns. His junior year was cut short by injury, but he dominated in the seven games he played. He was leading the Mountain West in receiving yards up until his injury and was named to the 2015 Biletnikoff Award Watch List, which goes to the best receiver in college football. He finished the year with 37 receptions for 678 yards and four touchdowns. Gentry also saw action in his sophomore and freshman seasons, finishing with 475 and 376 receiving yards respectively.

Before his time at Wyoming, Gentry was a standout two-way player at Grandview High School in Aurora, Colo. A Mile High Sports All-Colorado First Team selection as a senior, Gentry finished the year with 52 receptions for 1,019 yards and nine receiving touchdowns, to go along with 169 rushing yards and six rushing touchdowns. He also shined at the defensive back position, intercepting six passes. His junior year saw no shortage of feats, as he caught 50 passes for 693 yards and seven touchdowns while intercepting 10 passes. His dominance on the defensive end his junior year earned him First-Team All-State Class 5A honors as a defensive back..