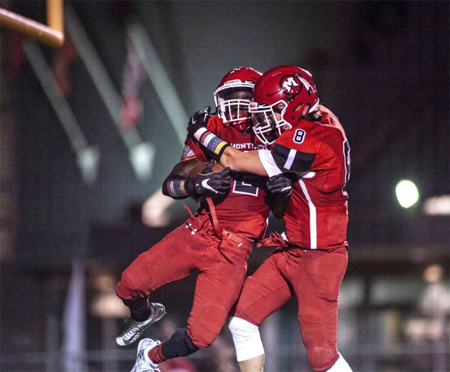 Class 4A football is again filled with matchups featuring highly ranked teams facing strong challenges and bragging rights up for grabs in many cities. Our weekly preview includes a look at the best five meetings on tap and those traditional rivalries.

New coach Jeff Giger has collected victories in his first two games at Brighton as the Bulldogs have moved past Prairie View 26-12 and Wheat Ridge 27-0. The matchup with Chatfield marks a stronger stretch in the schedule as they also meet Skyline next week. Isaiah Madril (8) and Cody Nelson (6) combined for 14 tackles in last week’s shutout of Wheat Ridge. The offense generated 178 yards rushing on 45 carries with Elijah Cortez, Ivan Scarpino and Vershon Brooks all reaching the end zone. Chatfield’s return from Florida was successful as they moved past Rampart 35-26. The Chargers led 28-14 at halftime and held off a late Rams’ charge. Malcom Boyd ran for 109 yards with three touchdowns while Matthew Canino threw for 150 yards. He connected with Daniel Nickles on a key scoring pass as well. The defense did give up 305 yards on the ground and will need to a bit tighter there against the Bulldogs.

Since they’ve dominated the recent series with Mesa Ridge, Pueblo West must avoid looking past this one to games the next two weeks with Pueblo East and Pine Creek. The Cyclones have beaten Mesa Ridge seven times since 2010 and each game has been decided by at least 11 points. West has also scored at least 30 points in all seven matchups and defensively, they’ve posted two shutouts. Mesa Ridge opened with a 42-28 win over Canon City but fell to Vista Ridge 40-20 last week. Kyle Caster has thrown for 316 yards and five TD’s but faces a Cyclones defense that’s given up only 72 yards passing in their two wins. Sophomores lead the Mesa Ridge defense as Cash Cheeks (24) and Elijah Davis (20) are the top two tacklers.

The Mustangs are licking their wounds a bit after suffering through a 49-3 loss to 5A power Columbine last week. The good news for Ponderosa is that they will not face a better team the rest of the way. The better news is that the Mustangs also have a history of battling back from a 0-2 start. They were in the same situation a year ago but responded with 10 straight wins and a trip to the state semifinals. Windsor did not play in week one and scored a 24-14 win over Vista Ridge in a game that was delayed a day and moved from the Springs to Windsor due to weather last Friday. The teams finally got on the gridiron Saturday afternoon. The Wizards ran for 454 yards including 243 yards and two TD’s from Tyler Shields. He averaged 11 yards per carry. Wyatt Ekeler totaled 102 yards and a score.

This one may be determined on whether the Durango defense can slow down the running game of Montrose. No official stats have been posted to MaxPreps for the Indians but their first option remains running the football and they’ve done it very well in wins over Grand Junction and Grand Junction Central. Durango meantime allowed 416 yards on the ground in last week’s frustrating loss to Palisade. The Demons though can score with almost any team in the state. Jordan Woolverton threw for 147 yards on two scores while hitting on 12 of 19 attempts against Palisade with Ben Finneseth and Gage Maestas both catching four passes. Each also scored a touchdown. Everett Howland gained 171 yards rushing to provide plenty of balance.

Zach Kapushion’s first two career starts as Broomfield QB have been top notch as he’s combined for 517 yards and five touchdowns in wins over Legacy and Loveland. He’s directed an offense that’s averaging 36 points in those two victories. With 13 catches for 309 yards and two touchdowns, Grant Swenson has been his top target. Caden Peters has also been over 100 yards in both wins; picking up 133 yards against Loveland and 104 in the opener vs Legacy. Standley Lake has just one game on their resume this year as they blew past Aurora Central 37-8. The Gators allowed an early score but then tallied the final 37 points of the game. Brady Marquez completed just six passes but two went for scores and he finished with 129 yards. The Gators also generated 301 yards rushing and needs the running game to move the sticks this week to keep the high-powered Broomfield offense off the field. Trevor Castro caught a TD pass and also scored on a 75-yard run against Aurora Central.

There is some common ground between the two teams as each has suffered a loss to Dakota Ridge this season. Dakota Ridge took out Rampart 34-16 in week one and then disposed of Monarch 24-7. So, based on the almost the exact margin of victory in each game, this one should be considered a toss-up. Despite the 0-2 start, Rampart has had plenty of success offensively, picking up at least 300 yards in both games. The running game generated 305 yards and four scores in last week’s loss to Chatfield. Chris Yoo, with 148 yards, and Cale Cormaney with 81 led the way. Monarch gave up 250 yards on the ground to Dakota Ridge last week.

Regardless of record, the week of the season, or what’s on the line, this is a great rivalry on the Western Slope. Both teams are seeking momentum following tough early losses to Montrose. Quarterbacks could play a major role in this one. The Tigers are led by AJ Mariz who has combined for 396 yards of offense and six touchdowns while Central’s main threat is Michael Gohn. He’s thrown for 256 yards and three touchdowns through two games.

This is a second in-city rivalry game that is always intense. Loveland has dominated the series of late and despite last week’s loss to Broomfield, remains the favorite. Both teams are looking for better effort on defense as the Indians gave up 420 yards in their loss and Thompson Valley allowed 364 yards in a 20-9 setback to Mountain View.