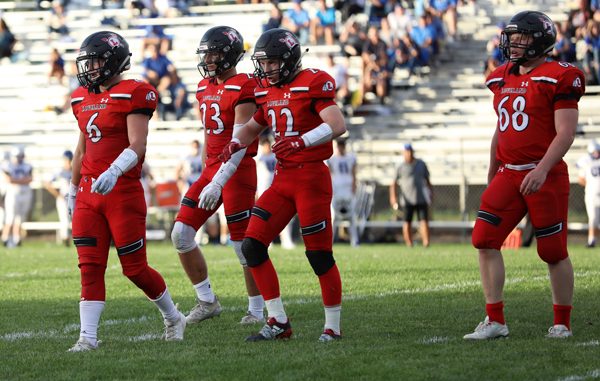 Defending state champion Loveland makes their 2019 debut this week as they open with another tradition rich program in Broomfield. The game heads up an attractive Class 4A schedule that also includes a good coaching storyline down South.

Dakota Ridge looks to build on momentum from their quality win over Rampart in week one while Monarch hits the field for the first time. The Coyotes are coming off a 5-5 campaign where they missed the post-season for the first time in three years. They will again look to run the football and should have success as three of their top five rushers from last season return along with QB Kyle Gordon. He threw for 454 yards as a sophomore. Jack Ewing, who led the Coyotes with 103 tackles in 2018, also returns for his senior year. Dakota Ridge jumped to a quick 14-0 lead on Rampart and led throughout. Ben Gultig threw for 169 yards and three TD’s including two to Mason Galbreath. He finished with four catches for 83 yards. Sean McNamara also finished with three receptions for 37 yards.

This is the fifth straight year the two clubs have met early in the season and each team has won twice but never two in a row. Based on that trend, Longmont may be favored as they lost 42-36 a year ago. The game marks the season opener for Longmont who won seven games last year. New faces must step up for the Trojans as they lost three-year starting QB Oakley Dehning and top rusher Drake Engelking to graduation. They do return top receiver Sage Yazzie (38 catches) and top tackler Brayden Engelking (68). Pueblo East is coming off a turnover-filled loss to Roosevelt in week one. QB Jack Helzer did throw for 289 yards in his starting debut but also ended with five interceptions. The Eagles also lost a fumble for a total of six turnovers. Marvin London caught seven passes for 86 and Kaedon Bowman five for 161 yards and a TD. With Palmer Ridge, Pueblo West and Discovery Canyon all coming up on the schedule, this may be a must-win for East.

Carson Lockridge ran for 206 yards and QB AJ Mariz had a huge game in leading Grand Junction past Palmer 64-20 last Saturday. Mariz ran for 165 yards and four TD’s on the ground and added two more scores in the passing game while finishing with 119 yards. But the senior QB was limited to just 33 total yards in last year’s 31-12 loss to Montrose a year ago. The Indians also won their season opener in downing Grand Junction Central 44-20. Cole Simmons scored twice in the opening quarter and Emmert Kastendieck added a third as the Indians jumped to a quick 21-0 advantage.

Good storyline involving the head coaches in this one. Monte Pinkerton was the AD at Pueblo West when he hired Clint Buderus to succeed him with the Cyclones. Pinkerton has since moved over to County and became the head coach there over the summer and in his debut faces the man he hired. Pinkerton had a long successful run at West which included a state championship in 2007. County is playing their season opener and must replace QB Lane Sherwood who led the team in rushing and passing yards last year. West ran for 187 yards in moving past Fruita Monument 35-14 last week. QB Chandler Mason collected 112 of those yards with three TD’s and also completed three of seven pass attempts for 120 yards. The highlight was a 94-yarder to Dawson Menegatti.

New Loveland coach Jeff Mauck has a tough act to follow as he takes over an Indians program coming off one of the most dominant seasons in Colorado history. The Indians outscored opponents 602-83 including a 192-35 march through the playoffs on their way to a 14-0 mark and state championship. Most of the talent from that club is gone as the starting QB, top four rushers, five of the top six receivers and 10 of the top 11 tacklers all graduated. Still the program has great tradition and will again be a factor in Class 4A. The top returnee is Colby Mauck who was third on the team in tackles (71) and catches (5) as a junior. Zach Ratowsky is the likely QB after completing 8 of 12 passes for 113 yards as a sophomore. Broomfield took home the Mayors Cup after beating Legacy 34-13 in week one. The defense limited the Lightning to just 28 yards on 25 carries. The Eagles allowed 226 yards passing but also picked off two passes.

Following an opening loss to 5A Legend, a rugged early season schedule continues for Ponderosa. Now they face a Columbine club ranked third in the largest division. Ponderosa also faces Windsor, Dakota Ridge and Vista Ridge before embarking on league play. But remember, the Mustangs opened 0-2 last year but finished 10-3 overall before falling to Skyline in the state semifinals.

Each club has good football tradition but both are coming off non-playoff campaigns in 2018. Windsor struggled to a 4-6 record but did manager a 21-0 win over Vista Ridge. The Wolves ended last year at 5-5 and have a new coach in Jason Cauley. Both teams were off in week one.

Because both teams lost season openers, this one becomes very important as the loser falls to 0-2 and has a tougher climb to the playoffs. Rampart held Dakota Ridge to 35 yards rushing but gave up three touchdowns through the air in the 34-16 loss. Chatfield must battle a bit of fatigue following their setback in Florida last week.

The Bulldogs picked up a rivalry win over Prairie View (26-12) to help new coach Jeff Giger win his debut with the program. Giger came over from Strasburg where he led the Indians to three consecutive appearances in the 1A state finals including titles in 2016-17. They’re seeking just their second winning season since posting eight wins in 2012. Wheat Ridge ended 5-5 last season and looks to end a post-season dry spell that stretches back to 2015. The Farmers lost to Brighton 28-14 a year ago.