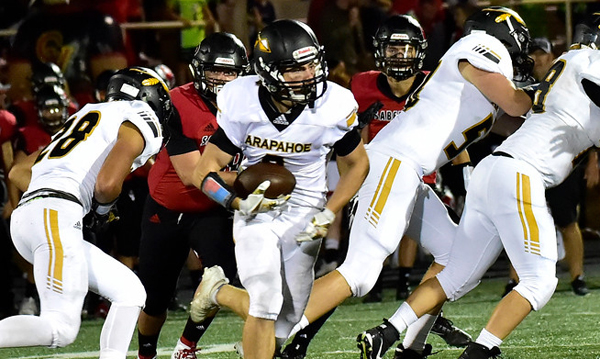 OK, now that we have gotten through that first week of Class 5A football with all of its mistakes, penalties and blowouts, and zipped through Week 2 that responded with some significant improvement, we actually will be on the downside of nonleague play once Week 3 is completed on Saturday.

As evidenced below, the matchups are getting a bit better, there are area games, others involving district teams that somehow remain nonleague and assorted face-offs that we don’t ordinarily see.

And in case you were wondering, all but one (Arvada West) of the 40 big-school teams have scored.

As the kickoffs get closer to darkness and the need for jackets increases, below are several offerings for your viewing pleasure, labeled accordingly:

Since going 5-6 in 2014, the only losing season in head coach Andy Lowry’s brilliant career, Columbine is a combined 46-7 and won at least 11 games in three of the past four seasons. … The Rebels needed only 28 plays from scrimmage last week to pound Ponderosa 42-3. They had a 35-point second quarter. Senior Tanner Hollens rushed for two TDs and senior QB Jadon Holliday had two completions for 106 yards and two TDs. … The two have played five times this decade with Columbine owning a 3-2 edge. … The military-based Trojans were hammered 40-19 by Eaglecrest last week, a round after a season-opening 24-7 victory over Horizon.

It’s the Milk Can Game or the battle for the Brookridge trophy. LPSS lies on the site of a previous dairy farm and the Littleton District teams battle for one of the more-unique prizes in the regular season. … Arapahoe, 6-7 under second-year coach Rod Sherman, is coming off a 23-13 setback to Castle View. … Heritage’s only game to date resulted in a 48-6 whipping of Air Academy. … Despite losing 28-24 last year, Arapahoe has won 11 of the past 14 meetings. The rivalry goes back to the original days of the Centennial League.

It’s Grandview’s third consecutive game against Douglas County Schools – the Wolves have beaten Chaparral and Highlands Ranch by a combined 91-14. … The always good Wolves had 21 first downs last week and exploded for 390 yards rushing, some 230 by Noah Schmidt. He also rushed for three TDs. … Senior Ty Hussey was in on nine tackles. … Former

This used to be the premier matchup among big schools, notably with a series of regular-season and playoff thrillers that included a bevy of all-staters in the 1990s. … Cherry Creek has won only four of the past 15 head-to-head meetings, but has taken the last three by a combined 107-31. … The Bruins took out visiting Santa Margarita, Calif., 35-10 last week as junior Julian Hammond threw for 147 yards and a TD, and rushed for a TD. … Mullen, operating under its third coach (Stanley Richardson) in three seasons, is off to a sound start and can point to improved line play on both sides, headed by Notre Dame pledge and DL Aidan Keanaaina, and improved overall defense. … Last week against Doherty, senior and emerging RB Damien Cearns had TD catches of 85 and 84 yards, and rushing scores of 79 and 3 yards.

They met in the second round of the playoffs a year ago with ThunderRidge winning 30-13. Plus, the Grizzlies won the regular-season meeting 28-24. …The host Knights are coming off a 50-7 waxing at the hands of Ralston Valley. Northwestern-bound QB Aidan Atkinson was held to 209 yards passing, just one TD pass and five interceptions. Fairview also mustered just 14 yards rushing. … The Grizzlies, who fell 22-14 to Lakewood last week, were hit for 288 yards, 181 rushing. … ThunderRidge is 10-4 since going 3-7 in head coach Doug Nisenson’s first season.

Also keep an eye on …

The visiting Raptors, despite being on their fourth head coach in three seasons, have won 31 of their past 32 regular-season games.

Second-year coach Todd Casebier has it going on for the SaberCats (junior RB Ian Peirce 197 yards rushing, 3 TDs) – they have won 10-of-14 games together.

The visiting Titans are bidding for just their second winning season since coming about in 2008. Senior Blake Rarog has rushed for 311 yards and five TDs.

Raiders sophomore QB Nicco Marchiol is off to a nice start with 535 yards passing for three TDs, and 68 yards rushing and another TD.

The defending state champion Eagles and coach Ed McCaffrey lost their first game in 16 tries last week, falling 27-17 to an obviously very good Cedar Grove, Ga. Senior QB Cole Bott threw for 247 yards and a TD, but was picked off three times by the Saints, who were state champions a year ago and 27-2 from 2017-18.