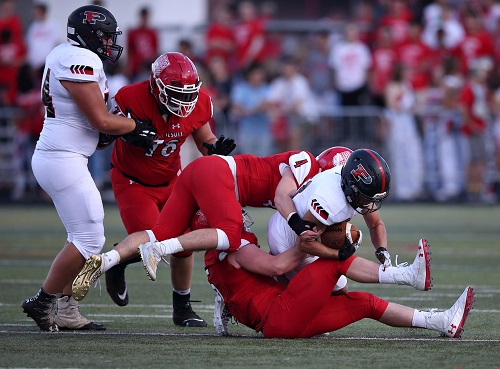 Mile High Sports is pleased to be partnered with Colorado Preps to bring you the latest high school news, scores and analysis from around the state. Listen Friday nights at 9:30pm for the Colorado Preps Scoreboard Show on Mile High Sports Radio (AM 1340 / FM 104.7) Be sure to keep up with the latest here and at ColoradoPreps.com.  Above photo by Ray Chen / arrayphoto.com

Can you believe it?

By Friday night, we’ll be one full month into the 2019 Class 5A season.

In other words, we haven’t experienced that much, including regular powers such as Cherry Creek, Columbine and Grandview being undefeated, although the likes of Lakewood and Legend also are 3-0 and Rocky Mountain is off to a 2-1 start.

On the other side, Legacy may be a surprising 0-3 and Pomona is an unlikely 1-2 as is ThunderRidge.

In another round in which there are no Saturday games – what a concept! – Week 4 comes with the following notable offerings for your viewing pleasure:

They have played three times since 2010 with Valor winning all three, including last season’s 28-7 home victory and the record-setting blowout in 2011, when Valor set a title-game mark in a 66-10 waxing for the 4A crown. … Valor hung on to beat Pomona 17-13 last week, a round after falling to Cedar Grove, Ga. … Sophomore RB Gavin Sawchuck is off to a strong start with 304 yards rushing and three TDs. … Senior Roger Rosengarten (6-foot-7, 275 pounds) has committed to the University of Colorado. … Since going 4-6 in 2012, Pine Creek is a sparkling 74-9. … Senior QB Gavin Herberg has 13 completions for 358 yards and nine TDs.

It’s the crosstown rivalry of Castle Rock. … Castle View owns a 4-3 edge in the series, winning the past four matchups. … Operating under new coach Eric Rice, the visiting Huskies are coming off a 23-22 victory over Denver South. … Sophomore A.J. Jackson heads DC with 141 yards rushing. … The SaberCats, one of the top turn-around stories among big schools under second-year coach Todd Casebier. They have won 11 of their past 15 games following six consecutive losing seasons. … Castle View has rolled to 823 yards rushing, 288 by junior Ian Peirce.

It has been one of the great series among big schools since the 1980s. … Sure, Pomona has just the one victory in three outings, but it fell in its opener to an emerging Regis Jesuit and went down against Valor last week. … Jack Pospisil and Chase Lopez have combined for 28 of the Panthers’ receptions, 17 by Pospisil for 237 yards. Both have three scoring catches. … The Bruins are fresh from a 35-0 pasting of Mullen in which junior QB Julian Hammond threw for five TDs. He has 10 on the season. … Cherry Creek and junior Arden Walker (team-leading five tackles for loss) stand second in big-school points permitted, 16.

A former Parochial League rivalry that goes back for decades. … Mullen has won five of the nine previous meetings in the 2010s, including 28-21 the past season. … The Mustangs were held to 130 yards last week against Cherry Creek, just 2 yards rushing. … Eight different Mustangs caught a pass last week in their first home shutout loss since the 2013 season opener (43-0 against Ralston Valley). … Junior David Doty heads Raiders rushing with 202 yards, but the larger story has been the quick, expected start by sophomore QB Nicco Marchiol. Now 6-2, 205, he is 46-of-67 passing for 766 yards and five TDs (with just one interception) and recorded 127 yards rushing and three TDs (tops on the team). … Senior receiver Jackson Connelly has 15 catches for 325 yards and three TDs.

Also keep an eye on …

The host Rebels and senior Tanner Hollens (362 yards, five TDs) have outscored the opposition by an aggregate 147-3; both figures head 5A.

The Lobos and longtime coach Mark Brook can be 3-1 for the first time since 2015.

Visiting Grizzlies looking to pick it up – another loss will match last year’s total.

The Wolves and QB Jacob Burr (541 yards rushing and passing for eight TDs) have beaten the Trojans three straight times, including 49-7 last year.

Under third-year coach Joe Johnson, the Cougars have won eight consecutive nonleague games and 10-of-13.