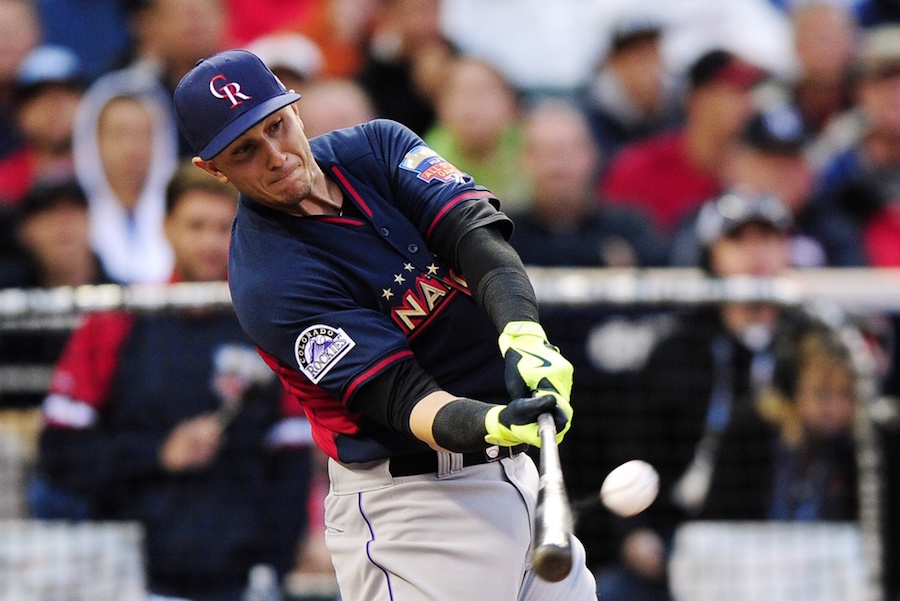 Colorado traces its Derby participation roots back to 1994, when Dante Bichette was the first to step up to the glorified BP plate in purple pinstripes.

The Rockies have sent plenty of bats to the Derby through the years, but none has ever been crowned the winner.

Here’s a quick look back at how each Rockies slugger performed at the Home Run Derby through the years.

In just the second year of the team’s existence, Bichette and his sweet, sweet mullet swung for the fences at Three Rivers Stadium in Pittsburgh. It was Bichette’s first of four career All-Star appearances. On the season he hit 27 home runs, 21 of which came before the All-Star break.

His performance at the ’94 Derby was a bit of a precursor for what would come in the second half. Bichette hit just three dingers for the National League, who fell to the American League 17-11. At least he performed better than Dodgers catcher Mike Piazza, who failed to leave the yard.

Another Blake Street Bomber represented Colorado in ’96, as Ellis Burks swung a big stick for the Rockies at Veterans Stadium in Philadelphia. It was Burks’ only All-Star appearance for Colorado (he also played in the Midsummer Classic for the Red Sox in 1990).

Like Bichette, Burks didn’t exactly blow the competition out of the water. His lone home run contributed to another National League loss, 36-23. Fortunately, he saved his big swings for when games mattered, slugging a career-high 40 home runs for the Rockies that season.

The ’97 All-Star break will be best remembered for Larry Walker’s hilarious moment when he refused to face Randy Johnson as a left-handed hitter. What fans may forget is that Walker slugged a Derby-best 19 home runs in the opening round to single-handedly carry the National League.

The NL ultimately fell to the AL 32-29, and Walker lost to the Yankees’ Tino Martinez in the finals. Walker didn’t let the All-Star festivities screw up his swing that season. He clubbed a career-best 49 dingers that year en route to the first and only MVP performance by a Colorado Rockies player.

The American League would run away in a landslide, led by Ken Griffey Jr. and his 19 home runs, but Castilla gave the home crowd plenty to cheer about in his second and final All-Star appearance.

Walker again appeared in the Derby in Boston, but he did not party like it was ’97 in ’99. The sweet-swinging lefty hit just two home runs in a 39-23 National League victory led by Mark McGwire.

Walker would get his redemption in the regular season, however, when he batted .379 for the year to earn his second consecutive batting crown and set a career high in the process.

In his second of five straight trips to the All-Star Game, Todd Helton also represented the Rockies in the Derby in 2001 at Safeco Field in Seattle. Helton hit a career-best 49 home runs that season, 26 before the break.

He managed just two home runs in the Derby, tying Alex Rodriguez. They were at least better than the Angels’ Troy Glaus, who was skunked.

Matt Holliday ended the longest Rockies Derby drought since the franchise was founded, appearing in 2007 at AT&T Park in San Francisco. Holliday would be best remembered that season for his head-first slide into home plate to win the play-in game against San Diego, but he really started to put himself on the map with his Derby performance.

Holliday made it to the second round of the ’07 derby against a field that included eventual winner Vladimir Guerrero, Albert Pujols and Prince Fielder (among others). Holliday would go on to win the batting crown and be named the NLCS MVP en route to Colorado’s only pennant.

Colorado went unrepresented for four years in the Derby until Carlos Gonzalez stepped to the plate at Kauffman Stadium in Kansas City in 2012. It was CarGo’s first of three All-Star appearances to date. Surprisingly, he was not named an All-Star in 2010, the year he won the batting title.

Gonzalez didn’t make it out of the first round of competition in ’12 with his four home runs. CarGo hit 22 home runs that season, ending the year with a .303 batting average.

Michael Cuddyer made it back-to-back years for Rockies in the Home Run Derby, appearing for Colorado at Citi Field in 2013. He would go on to win the batting title, but his performance in the Derby was one worth noting.

Cuddyer finished one home run shy of making the finals, just behind Bryce Harper. His eight home runs in the second round tied Harper for the most in that round, but a cumulative total left him on the outside looking in in the finals.

Like Cuddyer the year before him, Morenau would win a batting title in purple pinstripes the same year he appeared in the Home Run Derby. He was joined by shortstop Troy Tulowitzki, who made his only Derby appearance in five trips to the All-Star Game.

Morneau did not escape the first round, falling in a “swing off” to Todd Frazier. Tulowitzki advanced to round two, also falling to Frazier after hitting only two home runs in the round.

Gonzalez joined elite company in 2016, becoming only the second Rockies player after Larry Walker to participate in the Home Run Derby twice. San Diego’s Petco Park was kind to CarGo, who slugged 12 home runs in round one.

Unfortunately, Todd Frazier again proved to be a Rockie’s undoing, sneaking past Gonzalez with 13 home runs in the opening head-to-head round.

Blackmon faced Los Angeles Dodgers rookie sensation Cody Bellinger in the first round of the eight-man bracket. Bellinger, who was still 21 in the derby, eked out Blackmon 15 home runs to 14. Bellinger used a last-second home run of 440 feet to earn extra time and edge Blackmon by one.