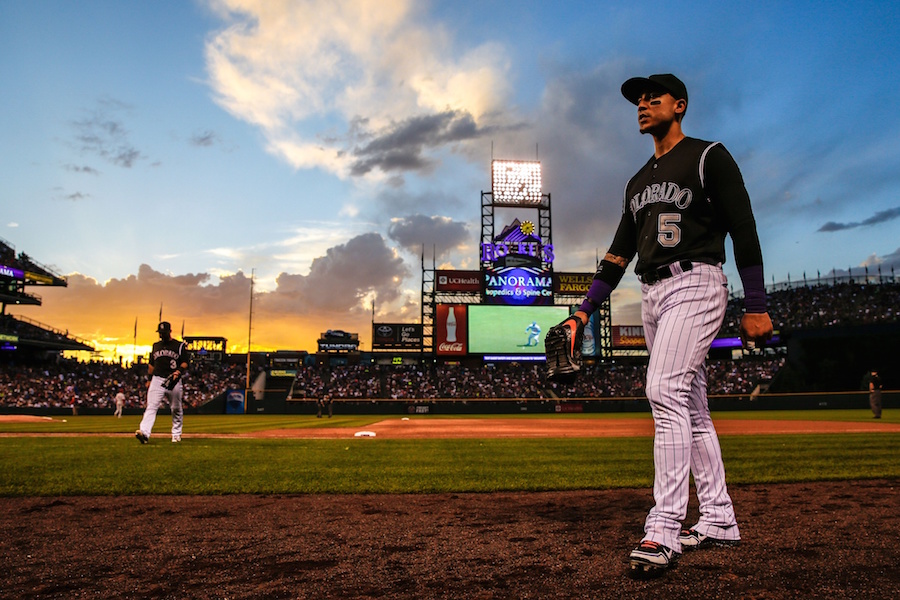 The Colorado Rockies are coming off an impressive 2017 season; shocking the baseball world with a hot start that manager Bud Black and general manager Jeff Bridich were able to nurse through trials and tribulations as they went along. Young pitching carried the Rockies through the first half of the season, and the offense warmed up as the season went on, helping to bring the Rockies their first postseason berth since 2009. Unfortunately, the season ended in a frustrating, 11-8 wild-card loss to the Arizona Diamondbacks. Now, with the offseason arriving sooner then the Rockies had hoped, they’ll have some key players who could possibly be hitting the market as free agents.

Moving forward, the Rockies have decisions to make on pursuing the free agents that helped them get to the postseason this year.

Tyler Chatwood finished the season with an 8-15 record, and his 4.69 ERA is just above the league average (4.60) for starting pitching. His inconsistency could hurt his chances of finding a multi-year deal, either with the Rockies, or with another team. The Rockies have found young studs like Jon Gray, Tyler Anderson and German Marquez with great control to bolster their rotation in 2018. Chatwood may be forced to look for a short-term contract with another team if the Rockies decide not to pursue.

Carlos Gonzalez has just completed a 7-year contract earning him $80 million. Rumors of ‘CarGo’ turning down a 4-year extension in the spring have circulated. If he did decide to decline the extension at that time, it would have been in hopes of having a good year and possibly finding himself in a position to sign another long-term contract to finish out his career. Unfortunately, it did not play out that way for Gonzalez as he struggled for the majority of the season. He began to turn it around in the last two months of the season, but in the beginning of August he was hitting just around .225 with seven home runs. He finished the season with a .262 average, 14 home runs and 57 RBI. Gonzalez could be on the move if he still believes he can get a long-term deal with a club that wants to take a chance on him.

Ryan Hanigan was picked up on a minor-league deal last season to add some depth to the Rockies’ minor-league system. When Tony Wolters went down with an injury, Hanigan added a good veteran presence to the team. Hanigan’s best-case scenario is likely another minor-league deal to add depth, knowing he can help a big-league club in the short term.

Jonathan Lucroy gave the Rockies a huge jolt after they traded for him in July. He picked it up offensively down the stretch and gave the team a massive boost behind the plate. Lucroy could be the Rockies’ biggest target this off-season, as he can solidify the catching position for seasons to come. His veteran leadership and knowledge was invaluable to the Rockies’ young and talented pitching staff.

Mark Reynolds overachieved this season after signing a minor-league deal with the Rockies to add depth behind the big free-agent signing of Ian Desmond. After Desmond’s injury, Reynolds found himself right back in the starting lineup as the first baseman. He finished the season with 30 home runs and 97 RBI. With Desmond healthy, don’t expect the Rockies to re-sign Reynolds to another minor-league deal. He could be on the move looking for a team that needs a power-hitting first baseman.

Jake McGee bounced back this season after having knee problems in 2016 and giving up a career high nine home runs. In 57 innings pitched, McGee struck out 58 batters with a 3.61 ERA. At times he has closer-type stuff. After reports surfaced that closer Greg Holland will turn down his option with the Rockies, McGee could potentially be on the Rockies’ radar for an extension to become their closer for 2018.

Pat Neshek came to the Rockies after the deadline from the Phillies and was an immediate boost for the bullpen. He can provide relief in middle innings of games or be used as a set-up man deep in games. Look for the Rockies to try and keep Neshek in their bullpen for 2018.

The Rockies will have some payroll to work with this offseason, especially if Gonzalez departs. Look for a busy winter for this team, whether bringing some of these players back, or signing new ones. The Rockies, confident in their homegrown talent, expect to exceed what they accomplished in 2017.