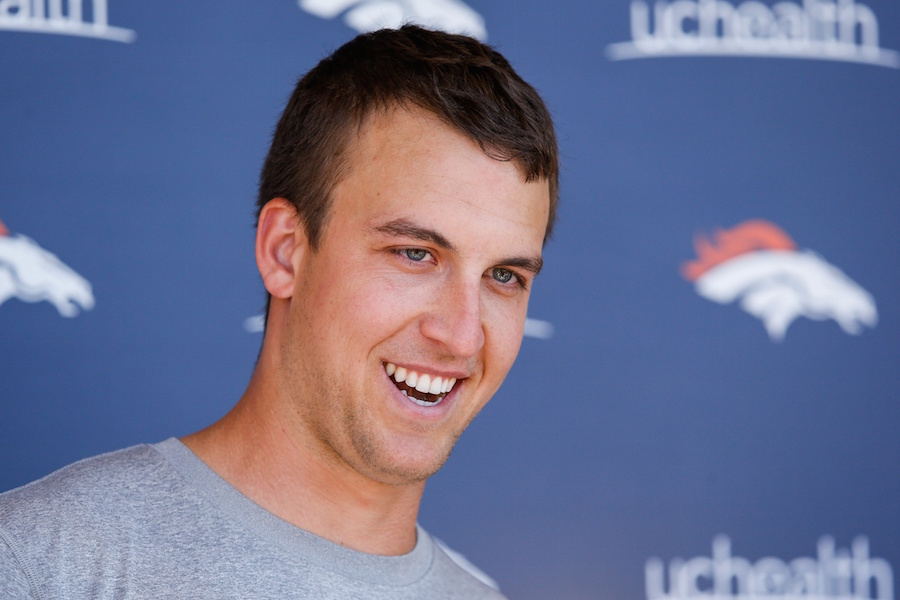 Denver sports fans can’t find the stories through the noise. The Denver Broncos 24/7 emergency eight-month long quarterback competition destroyed the conversation. In the current age of shouting opinions for the lowest common denominator, the discussion is secondary in Denver sports. What mattered was scoring points for your side.

Quieter Broncos fans are discouraged. They suffered through the yelling because they love the team. However, they are not few in number. Outside of the screaming of 2017, fans and media members are waiting to have real conversations about sports. In fact, it’s the majority in Denver, not the minority.

Civility and nuance are written into the code of Denver. Just look at our athletes.

The second-most accomplished Denver sports figure gained the nickname “Quoteless Joe” during his career. Joe Sakic was known for being a captain by example and never giving the media the controversial quote.

The best player in Colorado Rockies history, Todd Helton, was not known for being loud and abrasive. He was a quirky figure in the locker room. Helton chose when to take questions from the media and did so in a laid back manner.

Nikola Jokic, the Denver Nuggets’ future, is a humble guy. You won’t see him bragging about himself. Instead, he’s worried about having a good time on the basketball court.

The Denver Broncos history is full of big personalities. They also had the quiet leadership of Champ Bailey. The profiles on first round draft pick Garrett Bolles are interesting because Broncos offensive linemen are historically stoic. Trevor Siemian played down the importance of winning the hot QB battle over Paxton Lynch. He didn’t even call his parents.

There was far too much noise around the Siemian vs. Lynch issue. The volume was so constant and deafening that it drowned out real conversation.

Social media heightened the phenomenon. Since Twitter operates like a PG-13 middle school name-calling contest, the rest of the debate followed suit.

Outlets pandered to the noise. Outrageous takes came from all sides of the debate to try and win recognition. Sports media gives too much weight to the loudest voices on Twitter.

This problem goes back years. Media outlets were struggling to attract young viewers away from social media. Instead of focusing on creating high-quality content, outlets pivoted to riding the wave of trending topics. The formula became: Make enough noise to receive coverage. Forget if the coverage was compelling – the loudest voices love it.

The current iteration of this idea is exhausting and it creates closed feedback loops. People latch onto sound-bite takes. There is nothing compelling about a sports conversation that is stuck at this level.

Now that the competition is over, everyone wants distance from what they said during the debate. Imagine if they had worried more about quality coverage during that time. This backtracking would be unnecessary and we would all still have sanity.

The eye tests and analytics tests all fell away in favor of the noise test. With so much noise swirling around, the echo chamber hid the best sports coverage.

A few times over the last six months, I found myself in a rather pleasant conversation. In a casual manner, a friend would ask, “So what are your thoughts on the Broncos quarterback situation?”

It was like they were asking about any sports topic. They presented it like we were talking about whether Avs goalie Semyon Varlamov can rebound this season. There was no charged emotion in their question.

They didn’t want to yell at me as I answered the question. We brought nuance to the debate. We were able to get into the strengths and weaknesses of both quarterbacks without a 140-character limit. It was fun.

These weren’t isolated incidents. I’ve heard thoughtful rhetoric from people in the media that I respect. I’ve heard about the QB fatigue from friends and colleagues. It wasn’t enough to cut through the noise and pandemonium.

Have you ever gotten into an argument with someone that pretends to be a Law and Order courtroom lawyer? Let me tell you – it’s not fun. That’s what Broncos Country turned into – yelling into the void without regard for the process.

For the moment, the bubble has burst. The yelling quieted. I’ve seen several media members comment on the lack of excitement from the noise. No one’s sure how to return to the coverage of a normal training camp. After all, it’s tempered down now.

The nuances of sports coverage should be respected. Some fans don’t spend 12 hours a day reading about the Broncos. Some people aren’t trying to win an argument in following sports. We should find entertainment in the games and storylines.

I’ve learned little from the yelling around the Broncos. I felt fatigue hearing the same few points over and over again. I know that many Broncos fans agree with me. It’s time to let them reclaim their space as fans. Better sports coverage comes about when the more quiet majority is considered.