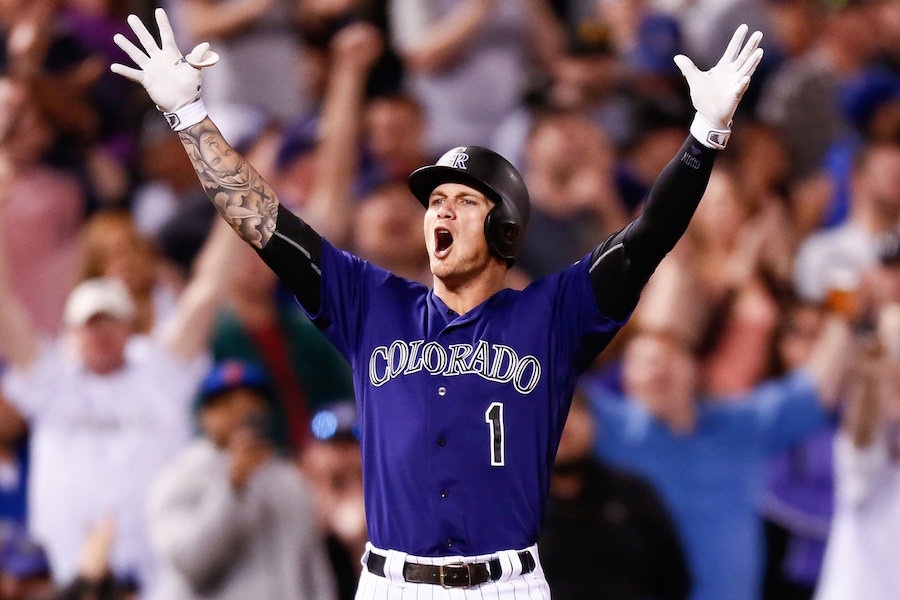 The Rockies finished with their best record in the month of June (13-14) under Walt Weiss, even after losing Gerardo Parra, DJ LeMahieu and Trevor Story to injuries. A lot of that has to do with the players that have stepped up off the bench to fill starting roles.

After Parra suffered an ankle sprain, Brandon Barnes was recalled from Triple-A on June 17. Since that time he’s put together a six game hitting streak, tied for the longest in his career, and hit .324 in 11 games.

Before Barnes came to the Rockies via a trade with Houston following the 2013 season, the biggest highlight in his career was hitting a walk-off ground rule double to defeat the Rockies. The Rockies showed interest in Barnes after that and he values the faith the team has put in him. Even though he has been demoted to Triple-A several times.

“I know the value I bring to a team and I’m not going to let one option down to Triple-A effect what I’m going to do with this team when I come back,” Barnes said. “I’ve always had a chip on my shoulder. I’ve always been told that I never had the bat to make it to the big leagues. Every day I go out there to beat on somebody.”

Another Triple-A standout who has filled in for Story and LeMahieu of late is Christhian Adames. The shortstop had his own impressive spring but the team had a logjam with the emergence of Story. Rockies’ closer Carlos Estevez translated from Spanish as Adames spoke on the difficulties of adjusting to a utility role.

“The toughest part about being a utility guy is that sometimes it’s hard because you kind of slow down a little bit,” Adames said. “The consistency in the big leagues is way better and that’s the point where I want to be. When I got called up, I was trying to learn form everyone. Now I have an idea of what to do and now I can grow some with these players.”

One of those players that have developed a mentorship role with Adames is Daniel Descalso. The utility infielder has a veteran presence on this bench and has helped Adames’ preparation with his experience at many different positions.

His first year in St. Louis in 2010, Descalso played a lot of third base, then second the next  year and after that more consistently at short. With 129 career games at shortstop coming into the season, it’s not a stretch to think that Descalso might have been the Opening Day starter if he did not break his hand. Instead Descalso continues to move around.

“[Moving around] is something that I’m comfortable with now, but it definitely takes time,” Descalso said. “The only thing I ever want to be remembered for is being a good teammate first and foremost. A guy that you can count on to show up every day trying to do something to help the team win. That could be a pinch hit off the bench. It could be starting wherever that day. Any way you can really.”

Tony Wolters knows something about versatility as he has adapted to catching after he started his career as a shortstop. But even Wolters has shown growing pains not starting every day and having to go late into the rain-delayed game two versus the Toronto Blue Jays. In the ninth inning, Wolters missed a catch thrown by Jason Motte, nullifying a potential double play.

“It’s frustrating not just not making the play, but bringing the energy down,” Wolters said. “I say I learn from my mistakes, but I make that play in my sleep. Next time I’ll make it.”

But Wolters saving grace will always be his play behind the plate.

“I have fallen in love with catching and that is my number one priority,” he said. “I’m the catcher on this team. I’m an infielder too, but I definitely don’t take anything I do on this team for granted. I’m just trying to get better every day.”

Team dedication is keeping these utility players united. Doing anything they can to help the Rockies win is the main mission. Even when those opportunities come intermittently.

Ryan Raburn, added this offseason after spending seven years in Detroit and three in Cleveland, has seen action in 60 of Colorado’s 78 games. He’s logged 130 at-bats, 57 of them in June. His 9 RBIs in June are tied with Descalso for most among the bench contingent.

The uncertainty of being called up can’t even interfere with their mission.

“Going down to Triple-A, I’m going down and not complaining or being bitter. Just working on my game and doing anything to help my team win up here. Even if that’s just a phone call or text,” Barnes said. “I’ve been here for three years now and with these guys it’s more like family. [Troy Tulowitzki’s] over there, but when that first pitch is thrown he’s not my friend anymore. I want to be a Rockie until the end of my career.”

Yet, despite exuding dedication and humility, Barnes still doesn’t feel like he belongs here.

“I don’t ever feel like I belong anywhere,” Barnes said. “The moment you feel like you belong, is the moment you take it for granted. You slip. Like I said, I came up here with a chip on my shoulder. I work for what I earn for me just want to compete for the team no matter where I’m coming from.”

For the Rockies, the dedication of these role players will be key if they are to surge in the second half of the season, no matter who is on the field.