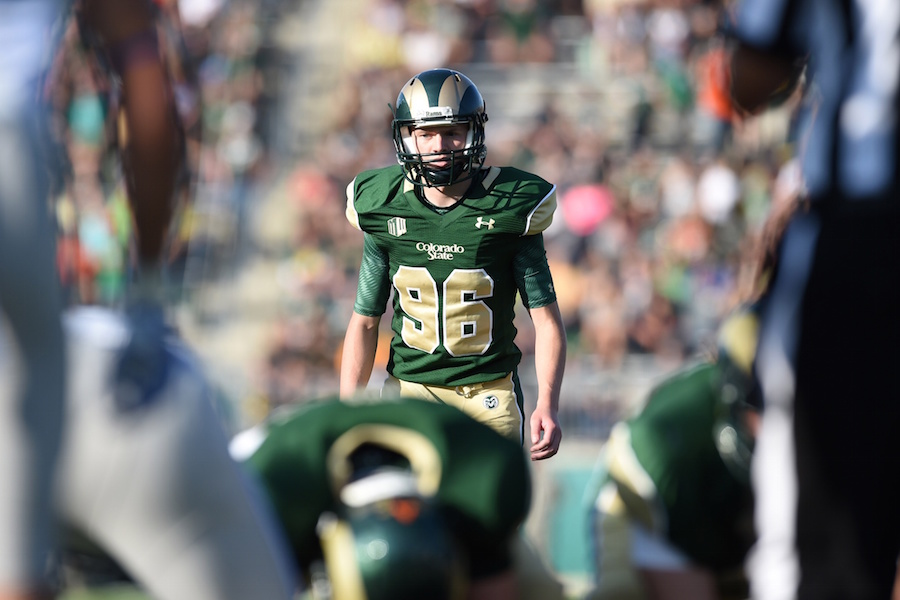 Colorado State junior Wyatt Bryan has been named a semifinalist for the 2017 Lou Groza Collegiate Place-Kicker Award presented by the Orange Bowl.

Bryan is a semifinalist for the award for the first time in his career. The Larkspur, Colo., native is in his third year as CSU’s primary kicker.

The Douglas County High School product has made 12-of-14 field goal attempts this season, with two field goals of 50-plus yards. Bryan is one of nine kickers in the FBS that have made at least one 50-plus yard field goal and have made 85 percent or better of their total attempts.

Bryan started the year making his first eight field goal attempts. In the season opener against Oregon State, Bryan was 3-for-3 on field goal attempts and made all seven of his PATs. Bryan is CSU’s leading scorer this year, with 71 points.

Bryan is now fifth in career field goals made in CSU history with 39. He is currently three away from tying Jared Roberts and Steve DeLine for fourth.

Semifinalists will be voted on by a panel of more than 100 FBS head coaches, SIDs, media members, former Groza finalists, and current NFL kickers to select the three finalists. These finalists will be announced on Nov. 21 and honored at the 26th Annual Lou Groza Collegiate Place-Kicker Awards Banquet on Dec. 4 in Palm Beach County. The same panel then selects the winner, who will be announced live on ESPN at the Home Depot College Football Awards Show on Thursday, Dec. 7.

The Award is named for National Football League Hall of Fame kicker Lou “The Toe” Groza, who played 21 seasons with the Cleveland Browns. Groza won four NFL championships with Cleveland and was named NFL Player of the Year in 1954. Although an All-Pro offensive lineman as well, Groza ushered in the notion that there should be a place on an NFL roster for a kicker.

The Lou Groza Award will be presented live as part of the ESPN Home Depot College Football Awards Show in Atlanta, GA on Thursday, Dec. 7. The three finalists will be honored during a celebration in Palm Beach County, culminating with the 26th Annual Lou Groza Collegiate Place-Kicker Award Banquet, presented by the Orange Bowl, on Monday, Dec. 4.