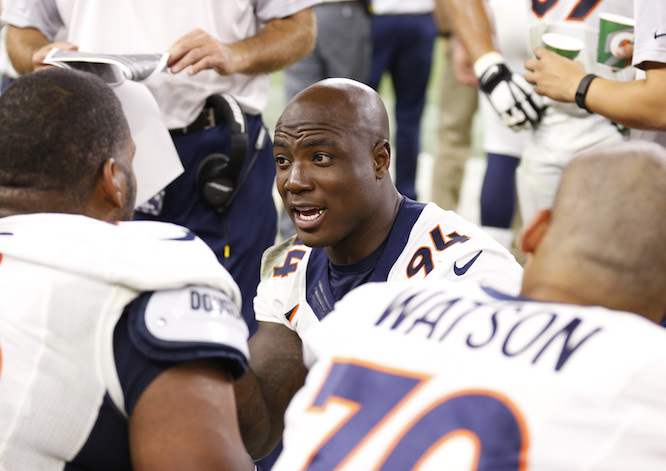 DeMarcus Ware is stuck on the sideline for the next four to six weeks after having surgery to repair a broken bone in his forearm. While it can be frustrating, he knows he’s still capable of contributing from the sideline; he’s not letting it hold him or the team back.

“You can go home and sit around all you want to. I’m not a couch type guy,” Ware told Eric Goodman and Les Shapiro of Afternoon Drive on Mile High Sports Radio. “I’ve gotta stay active and come in and still go through meetings. I’m doing as much workout as I can and get the treatment here. That’s probably the best thing to speed up the recovery. When you get the mental stimulation you also get the physical part about it, you’ll heal a lot faster instead of just sitting around at home.”

But it’s not just about his recover. For Ware, he’s using this time to ensure he’s helping his teammates become as prepared as possible for each week.

“It’s very frustrating to sit on the sidelines because I want to get out there and compete,” Ware said. “But I have been in this situation before, where I have been injured, so I compete mentally. I make sure I’m in all of the meetings, giving the guys what they need. When I am on the sidelines, I become that second coach for them.”

Becoming that second coach for Shane Ray paid great dividends for the Broncos against the Bengals. Ware was able to help him prepare for his start throughout the week. With Ray’s big game against the Bengals, Ware knows he listened.

“We talked a little bit before the game and through the week about the moves, what the tackle was going to do to him, how he needs to set up every single thing,” Ware said. “Then I saw him on TV do the move and it worked. So I’m yelling at the TV, ‘Do it again, do it again!’ Then he does it again and gets the second sack. I was saying, ‘Alright, now he’s listening to me.’ I want him [Ray] to be great.”

To catch the whole interview with DeMarcus Ware, including his talk with Shane Ray after the game on Sunday, click the podcast below…