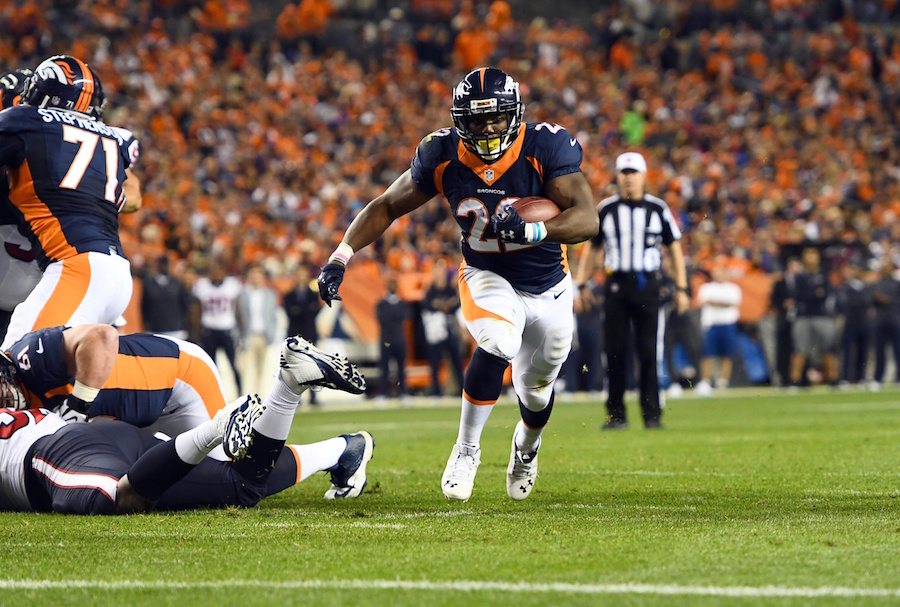 That’s how many yards the Denver Broncos averaged on the ground the last four weeks. Not good. Maybe that works for some teams, but not for these Denver Broncos, not with these quarterbacks.

The Broncos needed a spark. After putting up 282 yards on the ground the first two weeks of the season, things seemed to be looking up for the Denver run game. C.J. Anderson was moving well, and Devontae Booker was an exciting new piece in Gary Kubiak‘s offense.

Many pegged the sudden change to the loss of Donald Stephenson and Virgil Green to injury, but their long-awaited return in Week 6 didn’t make much of a difference.

And on Monday, against the Houston Texans, things looked to be getting off to a similar start. Well, sort of. Through two drives, the Denver Broncos had zero yards on the ground; they also had zero attempts.

So much for getting the run game back on track… 3 straight throws, 3-and-out for Denver

Loving this renewed commitment to the run game #Broncos

And then, things got going …

Following three straight three-and-outs to begin the game in which Denver only ran the ball twice, something clicked and Gary Kubiak turned the offense over to C.J. Anderson and Devontae Booker.

The next time they received the ball, down 6-0, Denver put the ball in the hands of their backs five times for 31 yards, capped off with an Anderson touchdown.

It’s a pretty simple formula for the #Broncos: Feed @cjandersonb22 and @dbook23

On their very next drive, Denver relied on Booker, who racked up 30 yards on three carries, to get the offense into scoring position, where Trevor Siemian hit Demaryius Thomas for a 4-yard touchdown to put the Broncos up 14-6.

But the rookie wasn’t done.

The Broncos continued to feed Booker in the second half, and he was rewarded with the first touchdown of his NFL career.

I've said it for weeks. Need more #Booker. Clearly more productive with this OL. Absolutely gashing the #Texans to a tune of 7.0 a carry

Despite the slow start, the Broncos rushing attack was fully revived on Monday night. And the good news is that both Anderson and Booker looked to be running on all cylinders.

More importantly, the run game allowed the rest of the offense to run smoother than we’ve seen in weeks.

While Siemian only had 157 yards through the air, he didn’t need any more, and that’s how the Broncos want it. Denver was efficient and direct; they knew what they wanted to accomplish, and they did it.

Now, we’ll see if they continue the ground attack next week against a Chargers team that kept them in check just 11 days ago.