Toxic differential makes a huge difference in the NFL.

In fact, it’s one of the most reliable ways to judge which team will win an NFL game.

What is toxic differential? It’s turnover differential — which the Broncos’ has been solid so far — added in with explosive plays. Those are considered plays of 20-plus yards on the ground or through the air.

As of right now, the Broncos are a +2 in the turnover differential department, with an “even” in Week 1 and picking off two passes against Trevor Lawrence for a +2 differential in Week 2.

Teams who win the turnover battle win 78 percent of their games, or just over three-quarters. And if they win it by +2, like Denver on Sunday, they win 87 percent of games.

Add in the explosive plays, and it helps paint the picture as to why the Broncos have not only won two straight games, but each by double digits.

Against the Giants, each team turned the ball over once. But Denver had three explosive plays compared to one for the Giants, and won with a +2 toxic differential. Melvin Gordon’s 70-yard touchdown run was on of those, along with a pass to KJ Hamler and one to Jerry Jeudy.

It was just as impressive on this Sunday, and 5-3 advantage or another +2 for the Broncos in their 23-13 win over the Jaguars.

That included a 33-yard pass from Teddy Bridgewater to Courtland Sutton in the second quarter, a 55-yard bomb to Sutton in the third quarter. Meanwhile the Jaguars’ enjoyed two explosive plays on offense in their first drive and the embarrassing kickoff touchdown return.

Still, the Broncos have been a +2 in two straight weeks in toxic differential.

So, what does it all mean?

Crucially, the Broncos aren’t turning the ball over. They have only one turnover, the fumble by backup tight end Albert Okwuegbunam in Week 1. That 0.5 turnovers per game is a vast improvement from last year when the Broncos led the NFL with 32 giveaways, or an average of 2.0 per game.

And secondly, the Broncos are generating more explosive plays than their opponents. It’s encouraging news because the offensive group is continuing to gel as time goes on so there should be even more explosive plays as the season progresses. And, think of the bomb which was dropped by Hamler in the end zone as a missed opportunity as well.

Simply stated, toxic differential is essential to playing winning football, as shown here by this tweet and graph: 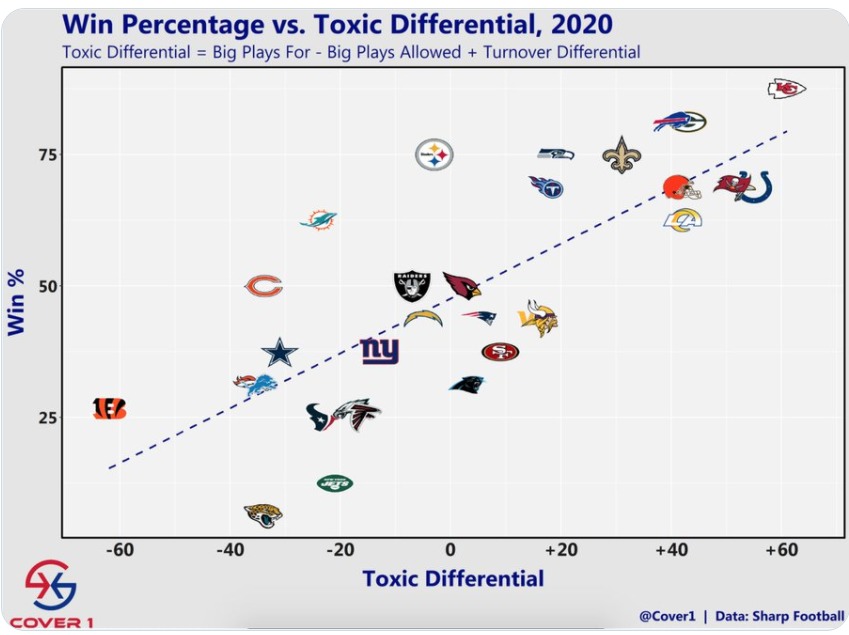 As we can see on the graph, a better toxic differential means a better winning percentage. Last year Denver was worst in giveaways at 32 (Drew Lock’s 15 interceptions led the NFL) and their 16 takeaways were 4th-worst. That gave the Broncos a -16 in the turnover differential department alone, or worst in the NFL.

And, they finished 5-11, among the worst in the league, too.

This year they are 2-0 and are a +2 in turnover differential (Tennessee’s +11 was NFL-best last year) and the Broncos are +4 in toxic differential.

Which really sounds more negative than it is, which is why I prefer “explosive differential.”

Vic Fangio’s defense was damn-near lights-out on Sunday, forcing four punts along with the two interceptions as Denver scored 23 unanswered points to win.

Somewhat ironically, Bridgewater’s extremely efficient passing isn’t as “electrifying” as some would hope. But, when looking at the numbers, the offense is enjoying more explosive plays than opponents two games into the year.

Of course, the Giants and Jags (each 0-2 now) are likely to be among the worst teams in the NFL. So are the next opponents in the New York Jets.

Either way, the Jaguars weren’t going to roll over and die on Sunday, they made Denver fight for the win. And the same will be true from the Jets next week.

But Denver still has a real chance to get to 3-0, especially if they enjoy a better toxic differential than the Jets next Sunday. Starting Week 4 things get really interesting as Denver faces Baltimore, Pittsburgh, Oakland and Cleveland in succession, but the same rings true.

This year, the Broncos have a real chance to make the playoffs for the first time since 2015. But they must continue to protect the ball while creating explosive plays.