After a long wait, the NBA finally released the entire regular season schedule on Wednesday afternoon.

The Denver Nuggets will open the season on Wednesday, October 19th and face the Utah Jazz. Unfortunately, the game will be on the road, meaning the returns of both Jamal Murray and Michael Porter Jr. to Ball Arena will have to wait until the third game of the season.

With the Nuggets’ now healthy stars likely needing to shake off some rust early, the organization was likely hoping for a softer schedule to open the season. Unfortunately, that did not come to pass, as the Nuggets will begin with 13 of their first 19 games on the road. They will only have three back-to-backs during October, November, and December combined though, meaning Denver should still be fairly rested at the beginning of the year. The Nuggets will have 12 back-to-backs in all, with four coming in January alone.

Though the early portion of Denver’s season is laden with road games, the months of December, January, and February will feature 24 total home games compared to 18 road games. The Nuggets will have a strong opportunity to rack up some wins during that stretch, hopefully finding a rhythm after Murray and Porter get back into the swing of things early in the year.

Nuggets fans are also hoping for plenty of games to occur on national television given the local blackout on Altitude via Comcast. In response, the Nuggets will be playing 16 games on ESPN, TNT, and ABC this year, as well as 12 games on NBA TV. The first national TV game will be against the Warriors on Friday, October 21st on ESPN. Other notable matchups are:

It’s just 82 games, but the schedule gives Nuggets fans something to be excited about heading into the season. Here’s Denver’s full schedule: 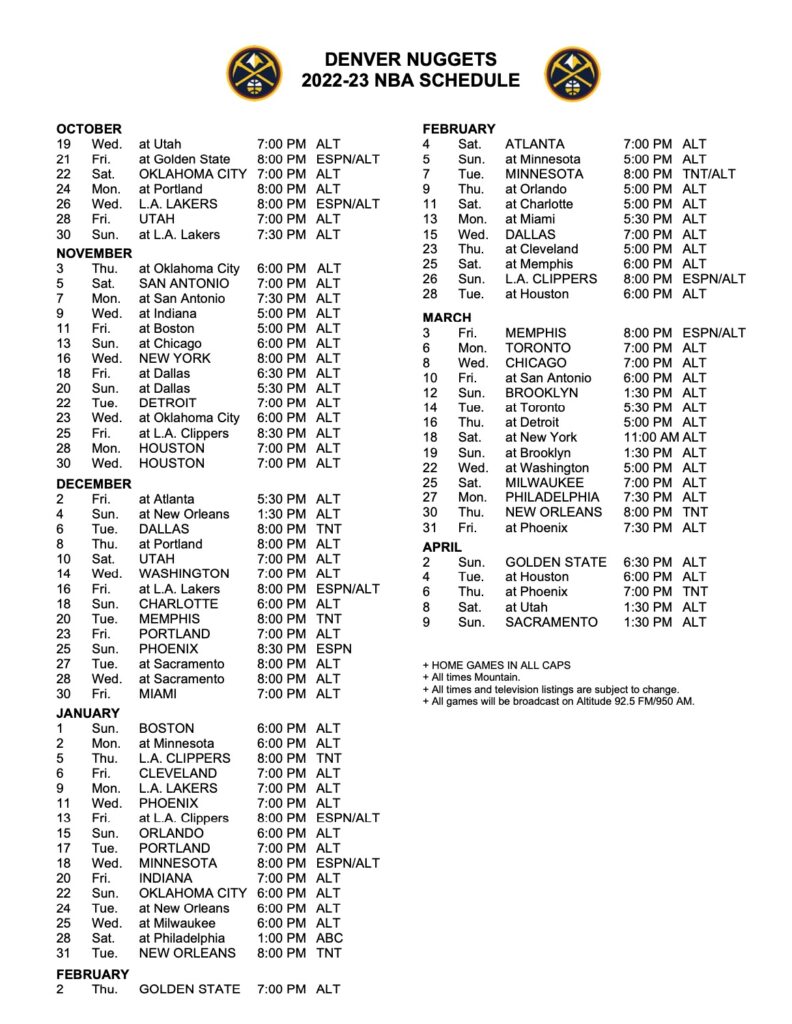