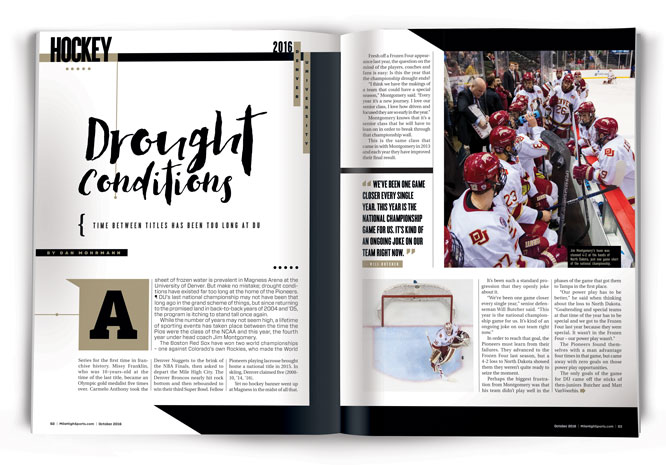 A sheet of frozen water is prevalent in Magness Arena at the University of Denver. But make no mistake; drought conditions have existed far too long at the home of the Pioneers.

DU’s last national championship may not have been that long ago in the grand scheme of things, but since returning to promised land in back-to-back years of 2004 and ’05, the program is itching to stand tall once again.

And while the number of years may not seem high, a lifetime of sporting events has taken place between the time the Pios were the class of the NCAA and this year, the fourth year under head coach Jim Montgomery.

The Boston Red Sox have won two world championships – one against Colorado’s own Rockies, who made the World Series for the first time in franchise history. Missy Franklin, who was 10-years-old at the time of the last title, became an Olympic gold medalist five times over. Carmelo Anthony took the Denver Nuggets to the brink of the NBA Finals, then asked to depart the Mile High City. The Denver Broncos nearly hit rock bottom and then rebounded to win their third Super Bowl. Fellow Pioneers playing lacrosse brought home a national title in 2015. In skiing, Denver claimed five (2008-10, ’14, ’16).

Yet no hockey banner went up at Magness in the midst of all that.

Fresh off a Frozen Four appearance last year, the question on the mind of the players, coaches and fans is easy: Is this the year that the championship drought ends?

“I think we have the makings of a team that could have a special season,” Montgomery said. “Every year it’s a new journey. I love our senior class, I love how driven and focused they are so early in the year.”

Montgomery knows that it’s a senior class that he will have to lean on in order to break through that championship wall.

This is the same class that came in with Montgomery in 2013 and each year they have improved its final result.

It’s been such a standard progression that they openly joke about.

“We’ve been one game closer every single year,” senior defenseman Will Butcher said. “This year is the national championship game for us. It’s kind of an ongoing joke on our team right now.”

In order to reach that goal, the Pioneers must learn from their failures. They advanced to the Frozen Four last season, but a 4-2 loss to North Dakota showed them they weren’t quite ready to seize the moment.

Perhaps the biggest frustration from Montgomery was that his team didn’t play well in the phases of the game that got them to Tampa in the first place.

The Pioneers found themselves with a man advantage four times in that game, but came away with zero goals on those power play opportunities.

The only goals of the game for DU came off the sticks of then-juniors Butcher and Matt VanVoorhis.

Both are anxious to get another shot at championship gold, but they’re not alone. In his freshman campaign, forward Dylan Grambrell got to experience a deep NCAA Tournament run. He has no desire to move backwards; coming away without a championship is only going to push him and the rest of the team harder to reach that goal.

With a strong senior class and a Frozen Four appearance under his belt, he has plenty of faith that he’ll be able to get over that hump this season.

“We have a lot of confidence,” Grambrell said. “All you want to do every year is improve and get better and better. We’re looking to get back there and looking to get a little bit farther and win that championship.”

That’s what these guys had in mind when Denver came calling. Growing up as hockey players and hockey fans, they were able to recognize DU as an elite program in the country. When the offer came to play for the Pios, they knew that they would have a chance to go for the gold.

“I personally came to Denver because it was a very prestigious program,” Butcher said. “In my mind, they’re always in the running for a national championship, no matter what year it is.”

The Pioneers have to get through a tough regular season schedule that includes five opponents that advanced to the NCAA Tournament. They’ll also play four games against rival Colorado College with the Gold Pan Trophy once again at stake.

Montgomery knows that getting through that schedule, the NCAA Tournament and the Frozen Four is no easy task. His best plan to accomplish all that is to make it harder for everyone else.

“I want us to be the hardest team to play against in the country, with the puck and without the puck” he said. “We need to put people on their heels and see if they can play at our pace.”

If the Pioneers can do that, they’ll have a chance to accomplish something special. Montgomery knows they’re capable and the players themselves know they’re capable.

For the seniors, it’s a chance to do something they’ve dreamed of since the day they walked on campus. The fact they arrived in Denver the same year as Montgomery only gives them more fuel to give the Denver hockey community something worth remembering.

“We came in with Monty; to go out on top is kind of our end goal,” Butcher said. “Obviously just to bring DU back to a national championship is something we’ve all been dreaming about since we’ve been attending this university.”

The seniors want to depart as champions. And by doing so they’ll put an end DU’s championship drought.