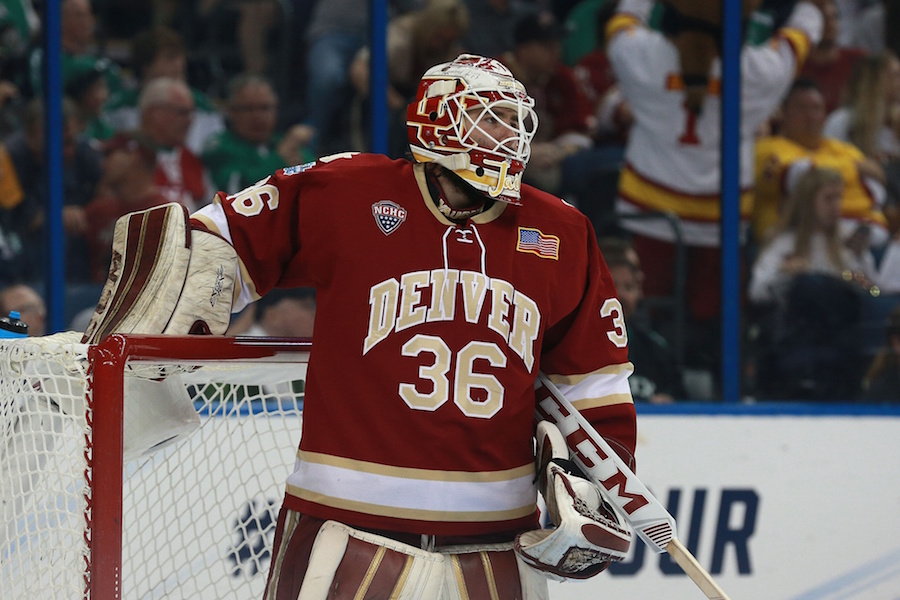 Goaltending dominated the National Collegiate Hockey Conference (NCHC) throughout the first month of 2017 as a pair of netminders picked up NCHC monthly honors for January. Denver junior Tanner Jaillet has been named the NCHC Player of the Month for January. It is the first NCHC monthly award for Jaillet. Additionally, Minnesota Duluth freshman Hunter Miska is the January NCHC Rookie of the Month.

Jaillet backstopped the Pioneers to a 5-1-0 record while in net to begin the New Year. His five wins and .833 win percentage led all NCHC goaltenders with both tying for fourth nationally in January. He also led the conference with a 1.44 goals-against average and a .950 save percentage during the month, both of which ranked in the top five in the NCAA in January. Jaillet allowed a goal or less in five of his seven starts this past month.

Jaillet opened January with a 15-save performance in a 5-1 win over Arizona State Jan. 6. After getting the night off in the series finale, he played in both games at Western Michigan the following weekend, totaling 49 saves in a split, despite allowing only one goal in each game. On Jan. 13, he stopped 27 shots, allowing only a power play goal in a loss, while he rebounded with a 22-save win the next night en route to First Star of the Game honors. He was also tabbed NCHC Goaltender of the Week for his performance.

On Jan. 20, Jaillet made 28 saves on 30 shots in an overtime loss at St. Cloud State, but again responded with a career-high 37 saves the following night to lead the Pioneers to a 3-1 win. He was named the game’s Second Star on Jan. 21. Jaillet then finished out his month with a sweep of Omaha, making 26 saves in a 5-3 win Jan. 27, while stopping all 16 shots he faced in the series finale before being relieved with nine minutes to play to prevent him from earning the complete-game shutout in the 5-0 victory. He was tabbed Third Star of the Game in the shutout.

Of the nine goals Jaillet allowed during January, only five came even strength (four on the power play), as he totaled 171 saves in 375 minutes of action during the month. On the season, Jaillet leads the NCHC with a .931 save percentage, while posting a 16-4-4 record and a 1.89 goals-against average.

Jaillet is now a candidate for Hockey Commissioners’ Association (HCA) National Player of the Month for January, which will be announced Friday.