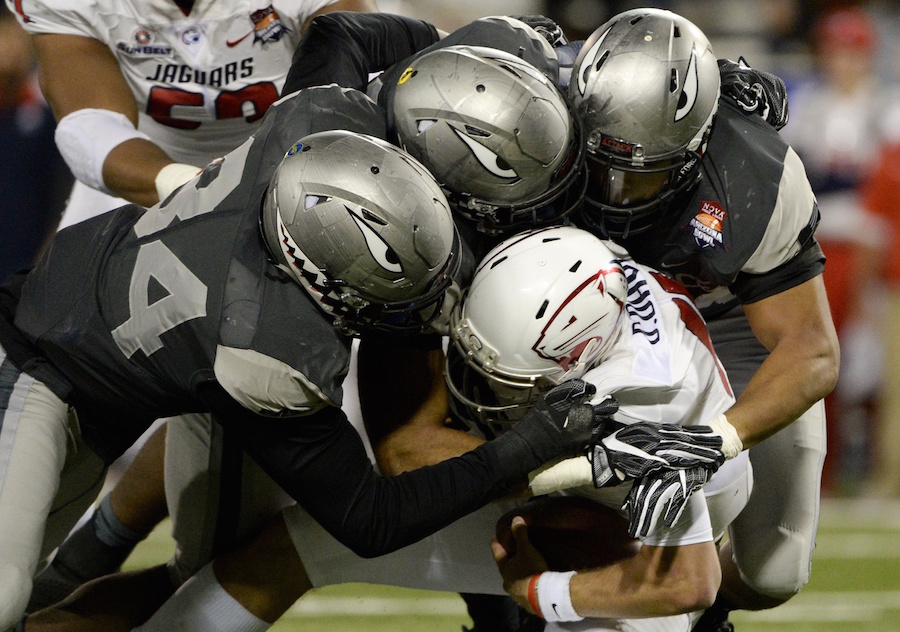 The air defense of the Air Force Falcons proved vulnerable on the very first play of the NOVA Home Loans Arizona Bowl, surrendering a 75-yard touchdown pass from Dallas Davis to Josh Magee, but the Falcons would eventually ground the South Alabama Jaguars, 45-21.

South Alabama (6-7) jumped out to a 14-3 first-quarter lead on Air Force (10-3) thanks to the Magee touchdown and another 75-yard TD drive that included a 51-yard pass play from Davis to Chris Lewis. Davis would finds Magee again in the second quarter for 37 yards to help set up a Davis rushing touchdown. But that’s where the South Alabama scoring would end.

Troy Calhoun’s Falcons locked down on defense after that, forcing five punts and two turnovers through the remainder of the contest. Air Force scored on their next six consecutive possessions, including a pair of rushing touchdowns by Jacobi Owens, to run away with the win. Quarterback Arion Worthman powered a balanced attack that gained 253 on the ground and 207 through the air.

The win is Calhoun’s fourth bowl win in nine games since taking over the Falcons in 2007. It is his second 10-win season at the helm. He spoke postgame about how his team overachieved this season.